Real estate professionals have scheduled at least 31,078 open houses this weekend with a total listing price of $14.3 billion in conjunction with Realtors Nationwide Open House Weekend, according to data from Realtor.com.

The annual event, organized by state and local Realtor associations with support from the National Association of Realtors, is popular with Inman News readers who self-selected to take an online poll this week.

Some brokers and agents grumble about the effectiveness of open houses in a day and age when the vast majority of homebuyers start their search process on the Internet. But 60 percent of 218 Inman News readers polled said open houses are currently part of their strategy for marketing listings. 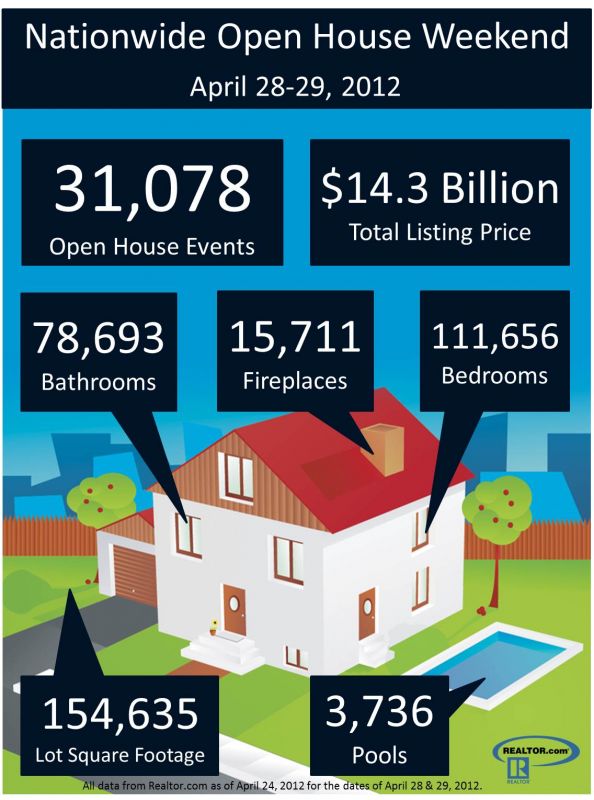 If open houses have a slightly musty whiff of tradition surrounding them, the methods used to promote them are not. Nearly all (98.3 percent) of the agents and brokers polled by Inman News who hold open houses said they promote them on the Internet, posting details on multiple listing service (MLS), broker and agent websites, and listing portals like Realtor.com.

Most (57.6 percent) said they also use social media sites like Facebook and Twitter. Yard signs were also seen as an essential tool for promoting open houses by 89 percent of those surveyed, but only 46 percent advertised the events in newspapers.

Most who don’t hold open houses said the results aren’t worth the time and energy involved (84.7 percent). But some (27.1 percent) said they’re also worried about safety and liability issues.

Nearly half of those who said they do conduct open houses said they’d held 10 or more in the last year, and 38 percent of all those polled said they planned to participate in Realtors Nationwide Open House Weekend.

More Inman News readers thought the primary purpose of the event was to promote Realtors and real estate professionals (62.6 percent) and homeownership (39.7 percent) — goals outlined by NAR in a press release template and media talking points — than to connect buyers and sellers (20.1 percent).

"I’ve done too many houses where no one comes, even the neighbors. And no one would have come even if I’d guaranteed the second coming of Jesus to occur," said broker William Metzker of Portland, Ore.-based Terradigm Real Estate Consultancy.

"A few sellers want no part of them, but most do, because they’ve bought into the myth that people often buy homes during an open house," Metzker said. "Statistically, that’s far from true."

But open houses can help agents prospect for buyer-clients, Metzker said, and create a "buzz" around well-priced and well-located properties.

Those are sentiments shared by Inman News readers who do hold open houses — more than half (56.4 percent) said they use them to prospect for clients they can represent in other transactions and generate a buzz or exposure for their listing (43.6 percent).

"I hate them, but if I were a beginning agent, I’d beg to host as many open houses as I could," Metzker said.

Scott Gill, senior vice president of Realty World Northern Calif. Inc., said he was once told by a top-producing broker that open houses are "the penalty a Realtor pays for having a seller ‘sell the Realtor’ that his or her home is worth more than legitimate market conditions can sustain. I think he’s correct."

Steve McKenna of Arlington, Mass.-based The Home Advantage Team said open houses "have their place in the marketing mix, just as yard signs, ads and postcards do. You wouldn’t solely market a house using postcard, nor would you rely on an open house as your only means of promotion."

At the end of the day, he said, "it doesn’t matter whether we think open houses are effective. We should be asking potential buyers and sellers whether they think it is useful in the homebuying (or) selling process."

Doug Miller, a Minnesota-based attorney specializing in real property law and the executive director of Consumer Advocates in American Real Estate (CAARE), is advising buyers to "just say no" to open houses.

"Open houses do not help sellers sell homes, and they certainly do not help buyers buy homes," Miller said in a post on the group’s website. "In fact, open houses are not only bad for consumers, they are downright dangerous."

Open houses also create the potential for commission disputes between Realtors, he said, because a listing agent might refuse to split their commission with a buyer’s agent brought into the transaction later on.