Consumers’ online experiences are increasingly influencing their homebuying activity offline, according to a joint study from search giant Google and the National Association of Realtors.

The report, "The Digital House Hunt: Consumer and Market Trends in Real Estate," includes custom research from NAR’s 2012 Profile of Home Buyers and Sellers as well as internal Google data and research conducted by Google and third-party marketing firm Compete.

Real estate-related searches on Google.com rose 253 percent over the past four years and 22 percent on annual basis in the third quarter, according to internal Google data. Of the latter, about one-fifth of such searches occurred on mobile devices — a 120 percent year-over-year increase.

Nine out of 10 house hunters searched online during the homebuying process with 52 percent choosing that as their first step in the process, the report said. Those who used search engines were 9 percent more likely to take an action on a real estate brand website than those who did not search and those who searched performed an average of 11 searches prior to taking an action, the report said.

These activities included registering to buy or sell a home, sharing a listing, submitting a lead form, using a mortgage calculator, viewing a contact phone number, or viewing directions to a home or agent office. Google and Compete backtracked 90 days from the time a user completed one of these actions to uncover behavior patterns that lead to the activity.

The report’s findings included insights on how house hunters are using online search, mobile devices, and video more and more in their homebuying endeavors.

"Increasingly, online technologies are driving offline behaviors, and homebuying is no exception," said Patrick Grandinetti, Google’s head of real estate, in a statement.

"With 90 percent of homebuyers searching online during their homebuying process, the real estate industry is smart to target these people where they look for and consume information — for example, through paid search, relevant websites, video environments, and mobile applications."

New-home shoppers were most likely to use a mobile search engine at the beginning of their search process, use general news websites and maps in the middle, and use mobile applications throughout the process. 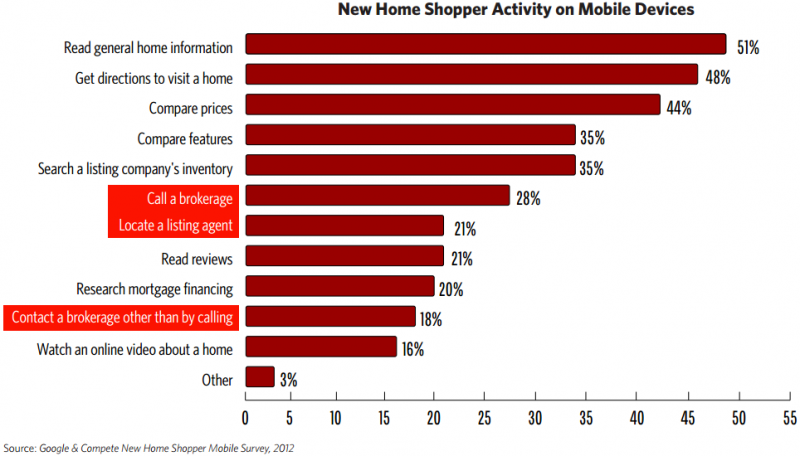 The role of tablets specifically has increased considerably. Searches related to real estate brokers on tablets grew 300 percent year over year in the third quarter, while searches related to homebuilders on tablets rose 362 percent. New-home buyers are particularly interested in virtual tours and videos showcasing properties and communities, the report said.

Buyers in general searched for homes an average of three weeks before contacting an agent. However, there was a great deal of variety among buyers — 40 percent of new-home buyers did not contact an agent for 120 days after they start researching, while nearly a quarter contacted an agent that same day. 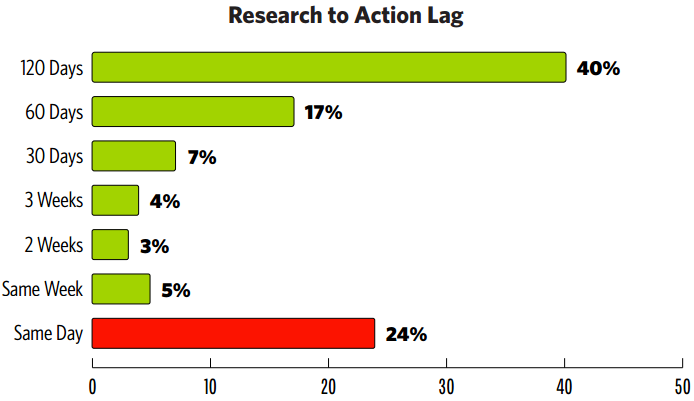 Among homebuyers in general who took action, 31 percent were aged 25-34 in second-quarter 2011, the biggest share of any age group. 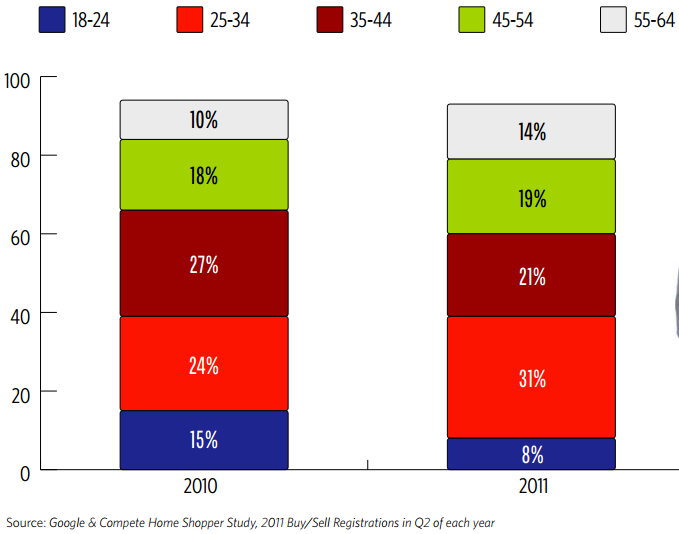 Video represents a crucial marketing opportunity for real estate professionals because homebuyers-at-large use video for a variety of research needs, the report said. Homebuyers who used video for home shopping were most likely to use it to find out more about a specific community, tour the inside of a home, or obtain general information. 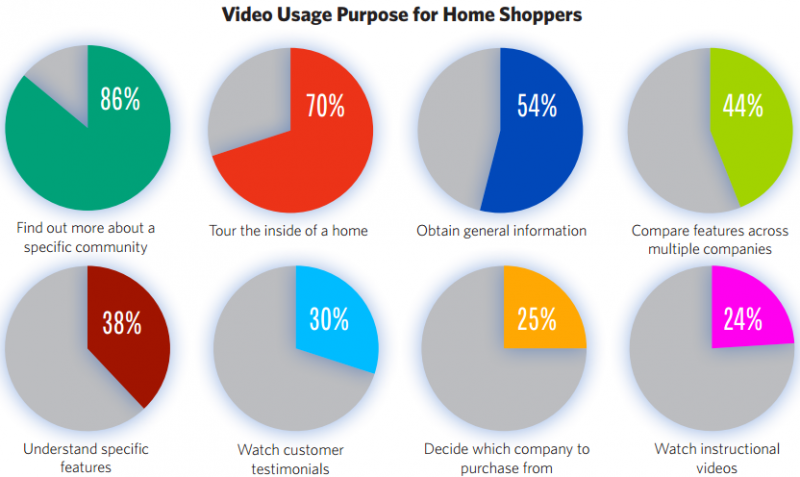 YouTube was the most popular destination for those who used video to house hunt, followed by brokerage websites. Interestingly, 37 percent of respondents to the 2011 survey used Google video, which means that before Google changed its search interface, the respondents searched on Google.com and selected "video" for the result type. The results returned were from YouTube, which is owned by Google. Consumer-generated online reviews and aggregator listing websites also got traffic from at least a third of house hunters who used video to search for homes. 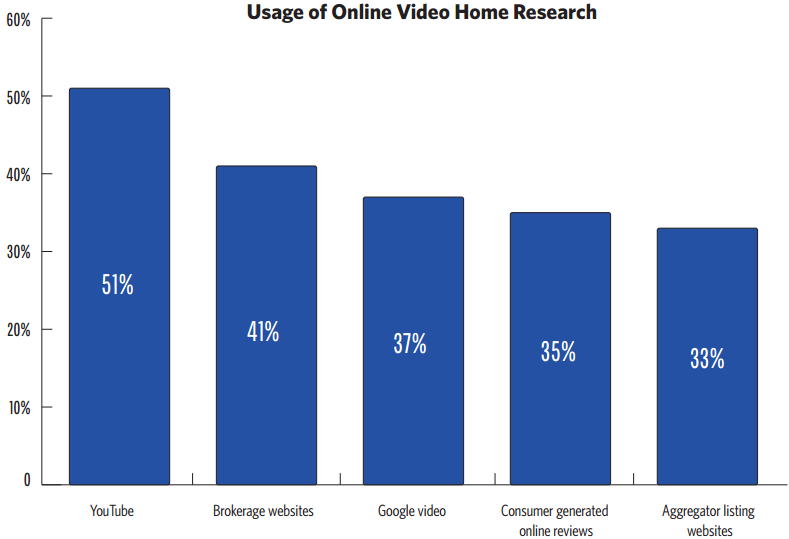 YouTube searches related to agents, including finding an agent, grew 46 percent on an annual basis in the third quarter. The site had nearly a quarter of a million agent-related videos, about half of which focus on buying a home, that quarter. There were also a rising number of homebuying searches, including those for renting an apartment, renting vs. buying, the homebuying process, and renting a house. Open house-related searches have risen 23 percent year over year, the report said.

The study found some generational differences in the online behaviors of buyers. Among first-time buyers, 52 percent first turned to the Internet for homebuying information, including searching for properties and researching the homebuying process, compared with 39 percent of seniors. Only 47 percent of first-timers used the Internet specifically to search for a home, however, compared with 75 percent of senior homebuyers. Nearly 8 in 10 (77 percent) first-timer buyers drove by a home they first viewed online, the report said.

For senior-related housing searches, the top states were Oregon, Washington, North Carolina, Virginia and Nebraska. Senior homebuyers valued neighborhood information and interactive maps when searching for homes online, the report said, and tended to drive by or walk through homes they’ve viewed online as well as find an agent they used to search for or buy a home after looking online.

Buyers who purchased a foreclosed home with the help of a real estate agent were more likely to use the Internet in their search, the report said. Such buyers tended to value website photos and detailed information about for-sale properties. Foreclosure-related searches increased 180 percent on mobile devices and 7 percent on desktops on an annual basis in the third quarter. The top states for foreclosure-related searched were Florida, Nevada, Georgia, Arizona and Illinois.