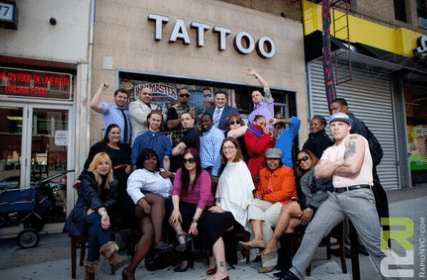 This post explores a marketing tactic submitted by Rapid Realty, the first winner of #madREskillz, a weekly Inman News Twitter conversation. Every Thursday, Inman News invites real estate professionals and companies to tweet offbeat marketing ploys using the tag #madREskillz. After reviewing the submissions (and “RTing” a few in the process), we select two finalists and put them to a vote on Facebook. Then we feature the winner in a story.

Some agents at New York-based Rapid Realty are taking a very, very traditional — you could even say ancient — approach to branding.

So far, nearly 40 agents at the New York-city brokerage have gotten tattoos of their employer’s logo. The unusual corporate tradition reflects the deep appreciation some of Rapid Realty’s agents have for their employer, according to the company’s founder Anthony Lolli.

But there’s also an incentive at play: Lolli raises an agent’s commission rate by 15 percent for getting inked.

“They wear it like a badge of honor,” Lolli said. “They get a lot of respect from the other agents with the amount of commitment that they have.”

The practice began when one agent got a tattoo of the company’s logo after a client, who was a tattoo artist, floated the idea, Lolli said.

But then he did: Lolli raised the agent’s commission from 25 percent to 40 percent, and he offered the same reward, what he’s dubbed “platinum status,” to any other agents willing to get the company’s black and green R&R logo permanently inscribed on their bodies.

Following a “tattoo party” where about five other agents took him up on the offer, the practice “snowballed” Lolli said. Today, 37 people have company tattoos.

Not everyone is convinced that literally branding yourself is an effective marketing move, however.

“Tattoos are nice and fun on their own but within the real estate industry I’m not sure that send the right message or image out to potential clients — kinda like seeing your attorney with a tattoo of his/her firm on their arm,” wrote Ann Lee Faranda, co-owner of J. Philip Real Estate.

But Faranda is not exactly an unbiased source. Her husband Phil Faranda, the other co-owner of J. Philip Real Estate, was Rapid Realty’s opponent for this week’s #madREskillz. He submitted the marketing idea of pricing listings according to their area codes.

Lolli claims that the tattoos help close deals, because customers “love the fact that there’s someone who’s 100 percent dedicated to the business.”

The unusual marketing practice isn’t the only thing that appears to set Rapid Realty apart from other brokerages.

The company has drawn attention for its “assembly-line” approach to real estate, where multiple agents serve one client, each in a specialized role. The company also differentiates itself from many other brokerages by focusing exclusively on rentals. Using its unique business model, Rapid Realty has expanded to 61 offices since it became a franchisor 30 months ago, according to Lolli.