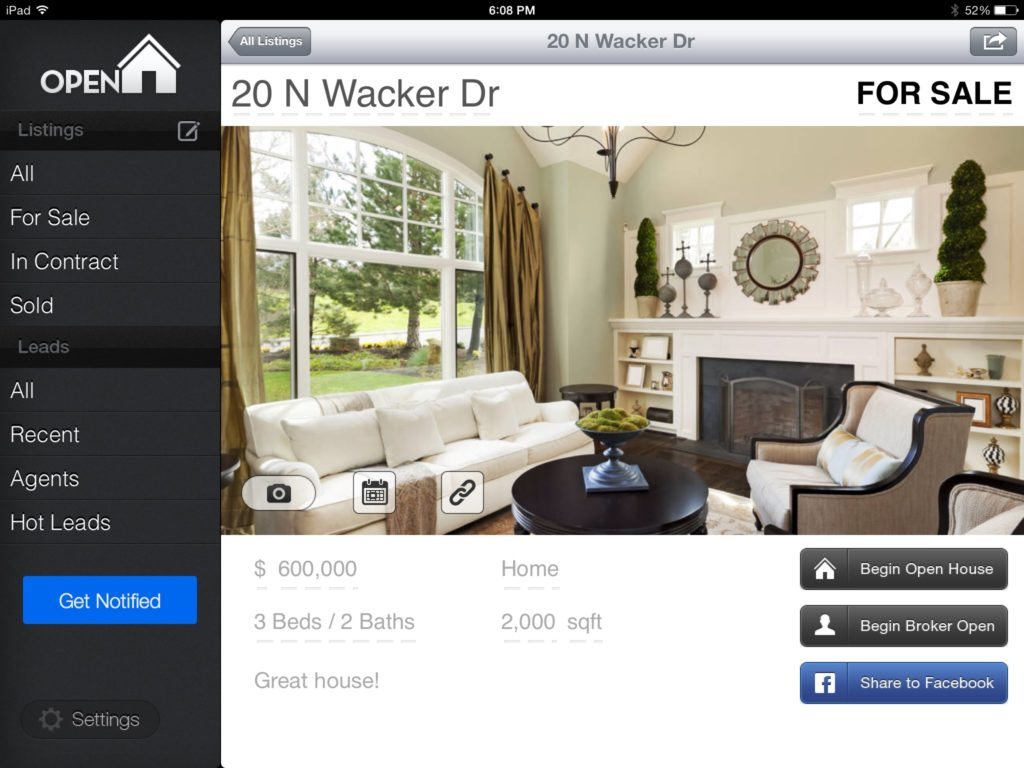 Real estate marketplace HomeFinder.com has acquired Open Home Pro, maker of a popular iPad app of the same name that helps agents capture and keep in touch with leads gathered at open houses.

Launched in 2009 by media giants Gannet Co. Inc., The McClatchy Co. and the Tribune Co., HomeFinder.com features more than 4 million listings that attract upwards of 3.4 million unique visitors a month to a network of more than 375 news sites, including the ChicagoTribune.com, Azcentral.com and MiamiHerald.com. In addition to the 130 websites operated by its owners, HomeFinder.com powers real estate search on more than 200 websites belonging to GateHouse Media through a May 2011 agreement.

“(The app) makes something agents do on a weekly basis much easier,” HomeFinder.com President and CEO Doug Breaker told Inman News. Part of the appeal for the acquisition, he said, was the app’s high rating in Apple’s app store and its lofty volume of paid users.

With HomeFinder.com’s traffic, reach and large technology team, Breaker says his firm has the resources to take the proven product a couple of steps further. An Android version of the app is already in production, and other opportunities include integrating Open Home Pro into customer relationship management platforms, and giving users the ability to advertise their open houses through HomeFinder.com’s network.

Open Home Pro founder Andrew Machado, who had previously stepped down as CEO of the firm, will not join HomeFinder.com. Machado joined ESPN in April as a senior product manager of its “SportsCenter” mobile app.

“I’ve put a lot of time and energy into making an app that agents love and I feel good about leaving it in the hands of the team at HomeFinder.com,” Machado said in a statement. “I know they will only continue to improve upon the work that’s gone into the app so far.”

Before the HomeFinder.com acquisition, which closed in December, Open Home Pro scuttled an iPhone app it released in December 2012 that helped agents create listings and single-property websites on the fly. That app just didn’t realize the same traction that the iPad app saw, Breaker said.

In February, HomeFinder.com joined more than 150 vendors chosen to participate in Re/Max’s “approved suppliers” program. Approved suppliers typically offer Re/Max broker-owners and agents discounts that Re/Max has negotiated for them.

HomeFinder.com expands online real estate search network
Back to top
Only 3 days left to register for Inman Connect Las Vegas before prices go up! Don't miss the premier event for real estate pros.Register Now ×
Limited Time Offer: Get 1 year of Inman Select for $199SUBSCRIBE×
Inmanpot
Log in
If you created your account with Google or Facebook
Don't have an account?
Create an Account
Forgot your password?
No Problem