Brokers and real estate professionals surveyed by Inman say local control of branding and technology gives indie brokers the ability to craft nimble, profitable businesses that can adapt quickly to local market conditions — without the burden of franchise fees.

Independent brokerages are more prevalent now than they have been in a decade, and an Inman survey suggests that real estate franchisors will have to continue to fight to maintain their market share as more brokers question their value proposition (click to download full report and charts as PDF file).

Independent firms do business without the fees, rules and bureaucracy of a franchisor. But they also do without the national exposure, brand recognition, access to enterprise-scale technology, and other perks that come with being part of a large franchise brand like Keller Williams Realty, Century 21 Real Estate, Coldwell Banker Real Estate, Re/Max or Berkshire Hathaway HomeServices.

While indie brokerages have always outnumbered those affiliated with national franchise brands, independents tend to be smaller firms. So with the rise of franchising in the modern era, the majority of agents came to be employed with firms affiliated with one of the big brands.

That trend has reversed. Today not only are more than 8 in 10 brokerages independents, but the majority of U.S. agents are with indie brokers.

The overall agent population is growing, but independent brokerages are currently capturing agents at a faster clip than franchisors, according to NAR member profiles for 2013 and 2014. From 2013 to 2014 the percentage of agents at independent firms jumped from 52 percent to 54 percent.

While 71 percent of affiliated brokers surveyed by Inman report that they have thought about going independent, 97 percent of indie brokers say they aren’t considering joining a franchise brand.

What accounts for this shift?

Brokers and real estate professionals surveyed by Inman say local control of branding and technology gives indie brokers the ability to craft nimble, profitable businesses that can adapt quickly to local market conditions — without the burden of franchise fees.

“I wanted independent control and less bureaucracy and politics,” said one independent broker about the decision to remain unaffiliated.

“We have the freedom to build our own culture and the ability to be organic and go with the flow,” said another.

While franchisors often tout their prowess in providing technology, training and leads, indie brokers say they’re doing quite nicely in those departments.

Nearly half of all those surveyed said technology that allows companies to streamline operations at a smaller scale is part of the reason for the resurgence of the indie brokerage model.

Eight out of 10 respondents (79 percent) said indie brokerages have a competitive advantage over franchise affiliates.

Those who felt that way said not only do indie brokers have more flexibility to adapt to local market conditions as they see fit (65 percent), but that they are free from the burden of paying franchise fees (72 percent).

Indie brokers say it’s not so much that they can’t afford to pay the fees — which do after all get them perks like exposure, technology and training, and referrals — but that they just don’t see the value in joining a franchise.

“We have the freedom to stay ahead of the curve and develop our own unique technology,” said one indie broker. “Plus, I can save money” by not paying franchise fees — savings that are passed on to agents, which helps with retention.

Brokers affiliated with franchisors were evenly split on whether they felt their current franchise fees were worth it.

“We get a lot of marketing, website and technology for our franchise or our royalty fee,” said one affiliated broker who participated in the survey.

But another complained, “What used to be provided by the franchisor is now available to all on the Internet.”

Each franchisor’s fee structure is different, but they all extract dues from their franchisees. Realogy brands like Century 21 Real Estate, Coldwell Banker Real Estate, and Better Homes and Gardens Real Estate, for example, typically charge their franchisees a royalty fee of 6 percent on their gross commission income, according to a Realogy regulatory filing.

Nearly three-quarters of affiliated brokers (71 percent) said a sharp rise in franchise fees would compel them to go independent, while 51 percent said they’d make the move if they were able to provide the technology their franchisor provides to their agents at a similar price.

A majority of Inman readers (80 percent) said brand recognition was the biggest advantage affiliated firms have over indies, followed by the greater reach afforded by franchise websites and networks (43 percent), training (42 percent) and scalable technology (39 percent).

Many of the largest brands run massive national marketing campaigns complete with TV ads that air on network and cable channels.

Coldwell Banker ran the above 30-second TV spot during the 2014 Grammy Awards.

Although this level of exposure may be perceived as a franchisor’s biggest value, independent brokers say that lack of brand awareness is not a big threat to their businesses.

While national franchisors brand on a larger scale, independent firms come up with creative marketing at the local level.

San Francisco Bay Area-based independent brokerage Red Oak Realty ran the above ad in select San Francisco movie theaters in 2014 to brand the firm to residents considering a move across the bay to the firm’s core market, Oakland.

Just 17 percent of independent brokers said brand awareness was an issue. The most often cited challenge for indies is keeping and attracting agents, followed by competition from large brokerages and franchisees.

Independent firms don’t receive the referral and relocation business that franchised firms have access to as part of a national, and international, network.

Indie brokers do have the option of joining referral networks like Leading Real Estate Companies of the World (LeadingRE), The Realty Alliance and Leverage Global Partners.

But most independent brokers (70 percent) said their firm does not participate in a referral network. Independent brokerage networks might account for some of the current popularity in independent firms, said LeadingRE CEO and President Pam O’Connor, who told Inman that membership in her organization has grown steadily over the last 10 years.

About half of independent brokers said their firms had brokerage-level marketing deals with one or more of the big three portals.

These deals are another perk franchised firms usually receive from their parent brands: network-wide discounts or other perks they’ve negotiated with the large real estate portals Zillow, Trulia and realtor.com.

Several Realogy brands including Century 21 have deals with the portals, as does Keller Williams Realty. Other franchisors do, too, but have been more mum about their agreements.

A majority of all survey respondents (63 percent) said they felt unaffiliated brokerages send more leads to their agents than franchised firms.

The survey showed that the larger the firm, the more likely it is to be affiliated with a franchise brand — which makes sense, because big brokerages are perhaps best positioned to take advantage of benefits like tech platforms that scale affordably, streamlined growth and training and operations playbooks.

NAR statistics agree with those results.

Just 10 percent of one-office firms were franchised in 2014, according to NAR’s 2014 profile of real estate firms. That percentage jumps to 28, 31 and then 45 as a firm’s size goes from two offices, to three offices, and then to four or more offices, respectively.

But between 2013 and 2014, franchisors lost market share in each office-size category to independents — more evidence of the growing popularity of going it alone.

Inman’s survey found that unaffiliated firms also have a much lower agent-to-staff ratio than franchised firms.

Of the independent brokers who took the survey, most (47 percent) said they had a support structure in the range of one staff member for every four agents.

Conversely, most franchised broker respondents (27 percent) said their firm had one staff member for more than 20 agents.

“Deep involvement with ensuring my agents are successful,” noted one unaffiliated broker as an advantage the firm has over franchised firms.

A majority of the independent brokers surveyed (65 percent) said that the ability to offer a high level of sales support to their agents gave them an advantage over franchised firms. That perceived advantage tied with their ability to offer consumers a higher level of service.

A unique, thriving firm culture, however, is the biggest attraction for agents, according to 75 percent of the independent brokers who took the survey. That topped a company design that supports agents’ brands (66 percent), access to in-depth coaching (53 percent) and hands-on tech training (53 percent).

“(We have) a tendency to attract more independent, creative agents that contributes to noncorporate culture,” said one independent broker.

Given their smaller size and local control, independent brokerages can develop a curated feel based upon an passionate attention to detail.

Though they may have more staff support for their agents, a significant subset of indie brokers (35 percent) said their firms don’t have training programs for new agents.

Though they have more freedom to set their own rules than their franchised counterparts, most independent brokers (71 percent) said their firm enforces a set of brand standards for their agents and business, such as requiring every agent to have the same type of business card.

A majority of independent brokers surveyed (56 percent) say that between 75 and 100 percent of their agents use the technology they provide them.

Competing with franchised firms (14 percent) was low on the list, however.

Of the 297 independent brokers who took the survey, 239 (80 percent) said they operated independently because they liked having control of decisions at their firm.

That reason trumped an interest in building their own brand (69 percent) and an aversion to franchise fees (61 percent).

As one independent broker put it, “I enjoy the freedom of customizing my own model.”

And while that enthusiasm doesn’t appear to be waning, there are circumstances where indie brokers say they’d be willing to affiliate with a franchisor — particularly one that addresses a specific need.

Survey participant Sarah Jones, broker and co-owner of Texas-based Bamboo Realty, told Inman that she would consider joining only one brand, Better Homes and Gardens Real Estate, because she sees it as a company that allows brokerages to keep their unique feel and identity.

Jones pointed to BHGRE Generations in Alabama, BHGRE 43 Degrees North in Idaho and BHGRE Go Realty in North Carolina as examples of companies that have affiliated with the brand without giving up their indie values.

Other brands, like Real Living, a sister franchise of Berkshire Hathaway HomeServices, also targets smaller firms who want to maintain more of a boutique feel.

When asked what would compel them to affiliate with a franchise, most independent brokers (53 percent) said they would consider signing on with a brand if they were set to retire but didn’t have a succession plan in place. A smaller number (29 percent) said they’d consider franchising as an avenue for expanding into new markets.

Realogy launched a program in November to address the succession scenario, helping franchisees train the next generation of brokerage leaders.

Among independent brokers who said they considering affiliating with a franchise brand, the benefit most often cited was economies of scale for both marketing and technology, followed by an interest in using a franchise brand’s network and scale to execute an expansion. 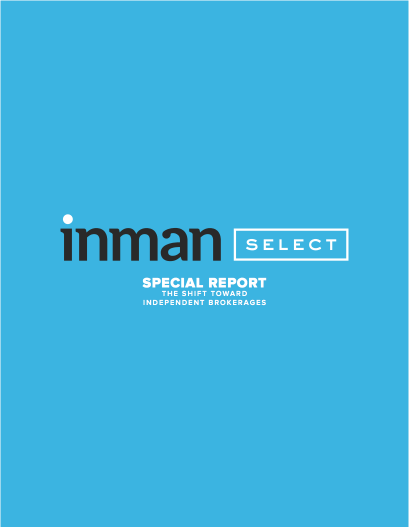