Many real estate agents think buying visibility on Zillow is a poor investment, and they can be quite a vocal group. The fiercest critics say you might as well light cash on fire.

But some agents and brokers have shown that it’s possible to build a successful business squarely on the back of Zillow advertising.

The team of four, who also like to call themselves “Zillow queens,” wring more than half their deals from Zillow. Their multipronged marketing strategy involves spending heavily on the portal’s advertising, racking up reviews from former clients on their Zillow profile and quickly engaging leads with personalized emails.

Kristin Stone oversees a team comprising her daughter, Elizabeth Stone, another agent and an administrator. The second two team members are former clients of Kristin’s. As fate would have it, they found her through Zillow.

In 2014, Home Happy Group spent as much as $6,700 a month to appear on Zillow property detail pages across 18 ZIP codes, forking over more than $80,000 to the listing portal last year, according to Kristin.

The team pays to appear anywhere from 10 to nearly 100 percent of the time on listing pages in certain ZIP codes. They shell out the most for exposure in ZIP codes where the team does the most business.

That advertising generated 62 percent of the $747,000 in gross commission that the team netted from 53 deals in 2014, meaning they saw more than a 550 percent return on investment from buying Zillow leads, according to the Stones.

The statistics around Kristin Stone’s photo on Zillow property pages typically are much more impressive than those around the photos of agents who appear next to her.

Kristin’s Zillow profile has been key to the team’s success. Over time, she’s accumulated a large number of reviews and sales records that entice consumers to contact her over other agents advertising on the listing portal.

When the team originally began buying leads from Zillow, nearly all leads connected with the team by submitting contact forms from listing pages.

Kristin diligently nudged clients to submit reviews. And as the number of reviews on Kristin’s profile grew, so did the teams leads.

Search patterns showed that an increasing number were traceable to her profile page rather than listing pages.

By June 2014, when Kristin’s profile boasted more than 60 reviews, the team was reeling in more than 200 leads a month from Zillow, up from 80 to 100 leads just a year before, when the the profile had only 23 reviews, Elizabeth said.

That’s despite the fact that the team increased its spending on Zillow advertising by only 30 percent from 2013 to 2014.

Today, Kristin Stone’s profile shows records of 110 home sales and 97 reviews with a perfect overall rating of five stars. Those statistics are shown with her ads making them a magnet for consumers.

“That means almost every time that we’re displayed on a property details [page] … people will try to contact us because we usually have more reviews than anyone else,” Elizabeth said.

It also doesn’t hurt that Kristin appears twice at the top of search results when consumers use Zillow’s agent-search tool to look for agents in her area.

She shows up in organic search results because of her pristine Zillow profile and also appears as a “featured” agent beneath the tool’s search bar because she’s an advertiser. 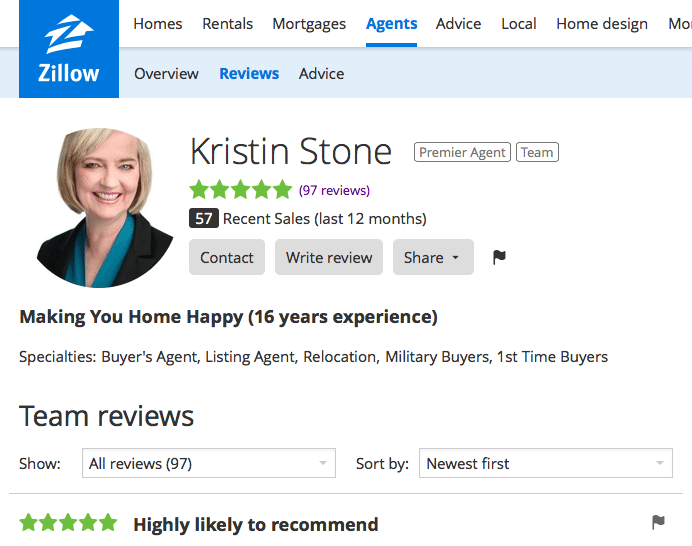 The team’s engagement strategy with leads has been another secret to Home Happy Group’s success with Zillow leads, according to the Stones.

More and more real estate agents are using lead management platforms to fire off automated emails or text messages to leads minutes after they submit their contact information.

But the Stones “eschew” this approach, said Elizabeth, a former English major.

While they try hard to respond quickly, ideally within five minutes, they make a point of personalizing their emails to “immediately form a human connection with them so they’ll feel comfortable and open up to us,” Elizabeth said.

Rather than sending a canned one-liner, Elizabeth might say something like: “This is a great neighborhood of homes built in the ’80s. They tend to have bigger basements. It’s available to be seen with advance notice.”

Elizabeth has traditionally used a number of tools to maintain connections with leads:

In fact, the team doesn’t even other bother with leads searching for homes priced at $200,000 or less; instead, the group hands those leads off to other agents in exchange for a referral fee if those leads convert into sales.

The team recently adopted software that may help the team better manage their lead volume.

They can use a platform from Commission Inc. to directly import Zillow leads into a contact database rather than manually input them; add notes to contact profiles; set reminders; and track emails, phone calls and text messages.

The Zillow queens have opted not to use all of the system’s fancy features, however. They’ve disabled the software’s automatic welcome emails and text messages.

Editor’s note: This story has been updated to correct that Home Happy Group has only three agents, not four. One of the team’s four members is an administrator.