Alex Bowman and Chris Ridenour knew the neighborhoods where they wanted to live when they began searching for homes on listing portals. But properties for sale in those communities were in short supply and often seemed to loom stubbornly above their price range.

Broadening their horizons, the two eventually found the homes they loved in neighborhoods they didn’t know much about, but that closely matched their budgets and had similar amenities to the neighborhoods previously in their crosshairs.

What they realized was that, by restricting search territories to formal city or neighborhood boundaries, listing portals could easily lead many buyers to initially miss homes that are just right for them.

That’s why they founded Casamatic, what Bowman, an Amazon and Blackberry vet, called “your existing home search site on steroids.”

The online search app, which is in private beta for now but is slated to launch in September, helps buyers transcend the often arbitrary boundaries of neighborhoods to pinpoint listings based solely on community and property characteristics.

Casamatic currently piggybacks as an extension on listing portals, but the plan is to develop it into a full-fledged mobile search app that doesn’t hitch a ride on mainstream property search sites.

“We’re Game Genie enabling the cheat codes for homebuyers if Zillow is Nintendo,” Bowman said, when presenting Casamatic at recent startup event. (Watch the demo in this video.)

Casamatic, which currently covers only Cincinnati but has plans to expand nationally, is strictly opposed to maps.

“We decided what we never want to do is build maps,” Bowman said. “We probably would have ignored all homes we ended up buying if we were shown a map.”

Buyers who download Casamatic’s extension are asked questions designed to gauge what type of communities they like and the property characteristics they’re after. After completing Casamatic’s quiz, users will see “match scores” tacked onto property details pages when they surf Zillow, Trulia or realtor.com. 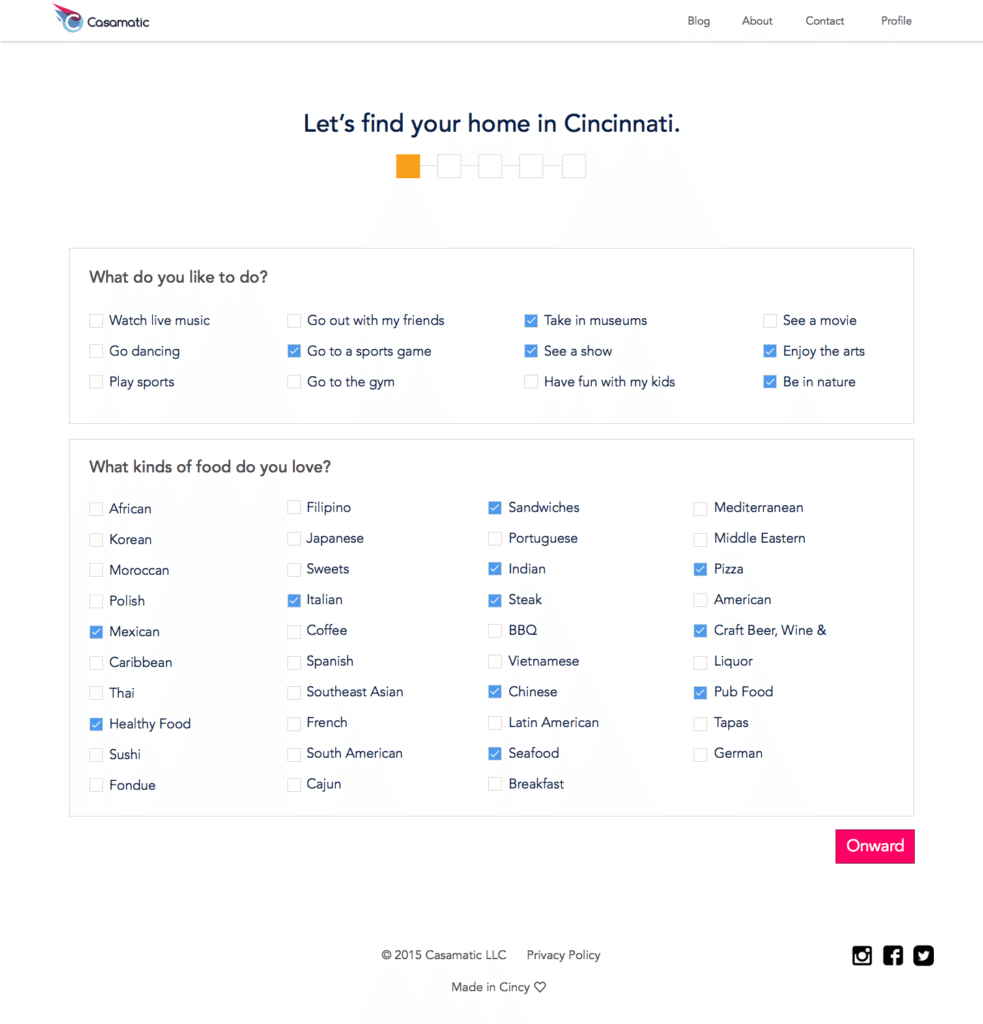 One page of Casamatic’s buyer quiz

The extension complies with listing portals’ terms of service, Bowman claims. It doesn’t scrape content, and its match scores appear on top of a listing portal’s interface, not inside it (which might be technically kosher, anyway).

But the extension also features a showings-on-demand tab. Users can click the tab to connect with a real estate agent who’s supposed to show a home at the drop of the hat.

Casamatic says it’s recruited 20 agents so far to work with buyers who request showings through its extension.

They are ready to pay 35 percent referral fees to Casamatic when the app feeds them a lead that converts into a closing, Bowman said, but he’s still not sure Casamatic will adopt that revenue model. 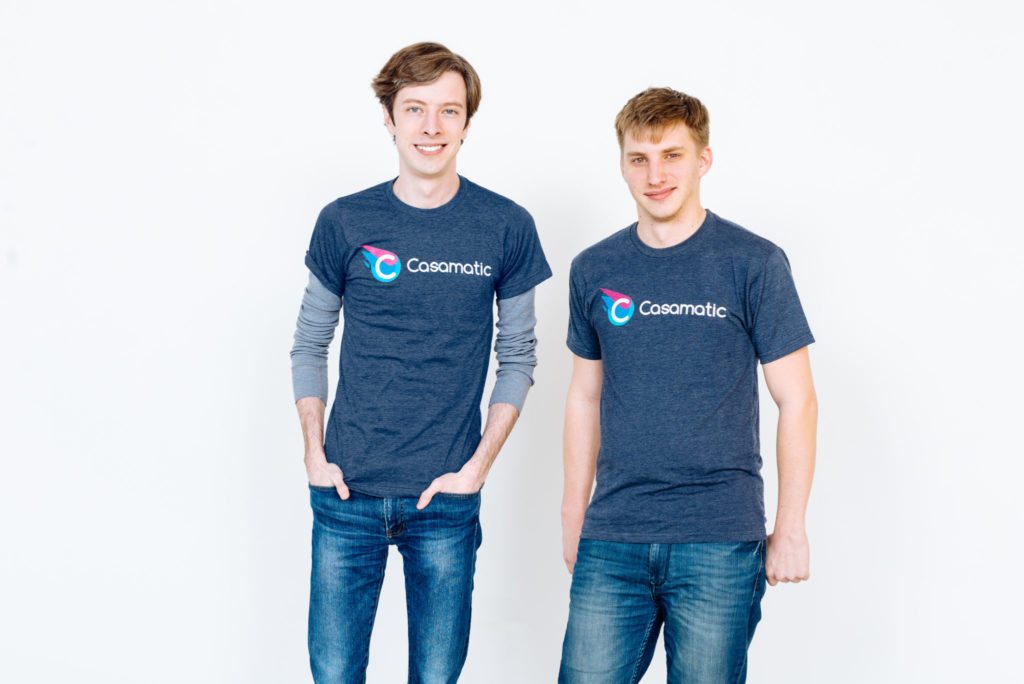 Bowman said he recognizes that some might see Casamatic as poaching leads from listing portals. But Casamatic, he emphasized, does not want to build a business “off of eating their lunch.”

Indeed, the startup aspires to do much more than just ride on the coattails of property search sites. It’s using the extension to gather input on its match scores so it can perfect them. Later, it will move on to bigger things, Bowman said.

The goal is to create a mobile app that integrates listings from the local MLS with Casamatic’s match scores and showing-on-demand service.

Casamatic is in the process of trying to obtain direct feeds from some multiple listing services, Bowman said.

If that doesn’t work out, Casamatic could also source for-sale properties from ListHub, the listing syndication service operated by Move.

The startup also wants to nail “predictive search” — to gauge a buyer’s search preferences without having to ask the buyer what they are.

“We’re asking buyers five or six questions to get started, but we don’t want to ask any questions,” Bowman said. “We want to make it so we can determine what’s a great fit for you based on things that are already out there.”

Bowman laid out a few ways Casamatic could potentially pull that off.

Running in the vein of other startups pioneering predictive real estate search, like Relocality and Hubdin, Casamatic could crawl buyers’ social media profiles to infer their preferences and recommend listings accordingly. 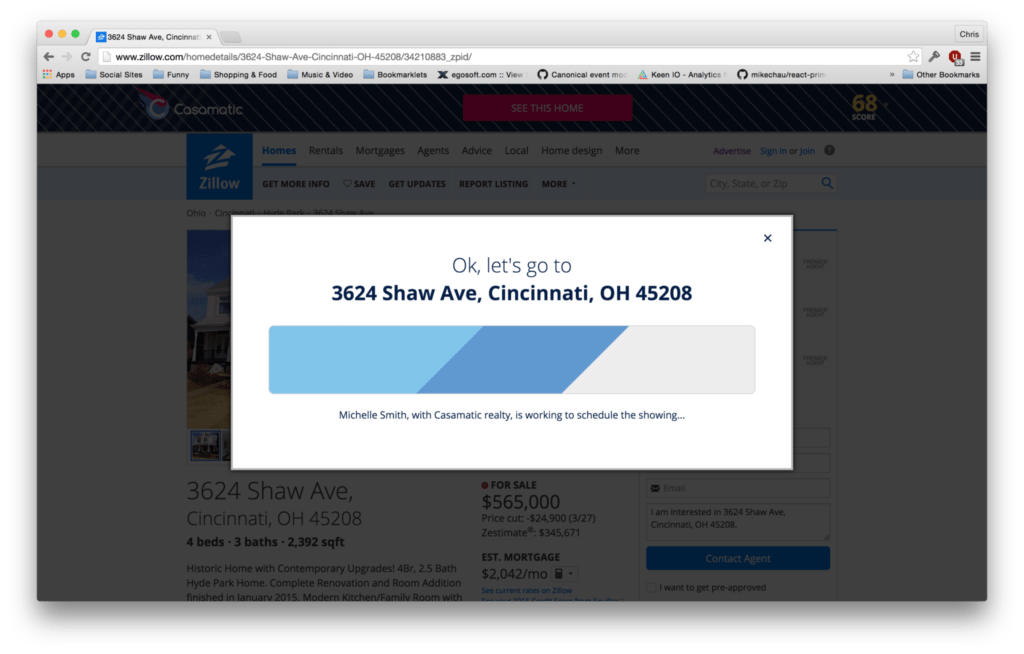 Yelp, Foursquare and Facebook check-ins could help the startup understand the sort of amenities a buyer is drawn to.

But perhaps the most powerful source of data would be a user’s mobile phone location data. It would allow Casamatic to see everywhere a user goes, and guess what a user likes without needing to see any information previously posted by the buyer.

“There’s really no reason that we have to ask you what your favorite things are or ask you where you work,” he said about mobile location data and social media content. “It sounds a little creepy, but if we know … we’re able to learn more about you and provide better matches based on what we’re learning.” 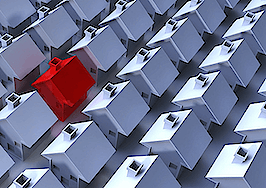 The new way to search for real estate 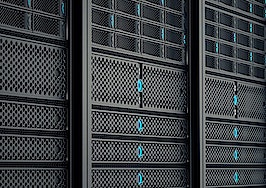 Big data tools = Realtor results
Back to top
Only 3 days left to register for Inman Connect Las Vegas before prices go up! Don't miss the premier event for real estate pros.Register Now ×
Limited Time Offer: Get 1 year of Inman Select for $199SUBSCRIBE×
Inmanpot
Log in
If you created your account with Google or Facebook
Don't have an account?
Create an Account
Forgot your password?
No Problem