When a buyer client sees a news story about something that could affect the home loan, chances are high that real estate agents will be getting some borderline panicked questions in the near future. Fallout from Wells Fargo’s employee cross-selling scandal continues to raise questions about how the bank’s customers were harmed by the illegal scheme — including their ability to access financial products and services like mortgage loans.

When a buyer client sees a news story about something that could affect the home loan, chances are high that real estate agents will be getting some borderline panicked questions in the near future.

Fallout from Wells Fargo’s employee cross-selling scandal continues to raise questions about how the bank’s customers were harmed by the illegal scheme — including their ability to access financial products and services such as mortgage loans.

New developments surrounding the scandal are reported every day, adding to agents’ confusion.

Here’s a breakdown of what happened, how the bank’s customers may have been affected and how agents can work with mortgage brokers to help their clients remove any resulting barriers to the mortgage lending and homebuying process.

Summary of the scandal

The scheme came to light in a 2013 Los Angeles Times story, which then triggered an investigation by the Los Angeles city attorney.

When regulators started sniffing around, Wells Fargo tapped PricewaterhouseCoopers to conduct an independent review of accounts dating back to 2011 and found that thousands of employees had participated in the scheme:

Wells Fargo employees also applied for about 565,000 credit card accounts that may not have been authorized by consumers. Some of these affected consumers incurred annual fees, as well as associated finance or interest charges and other fees.

When the audit brought these practices to light, Wells Fargo fired more than 5,300 employees and refunded $2.6 million to customers.

In the weeks since, the Wells Fargo scandal has dominated headlines nearly every day.

Chairman and CEO John Stumpf faced tough questions in two congressional hearings last month, where lawmakers suggested that executive compensation and bonuses should be clawed back and Stumpf and other Wells Fargo leaders should be fired. Rep. Maxine Waters, D-Calif., even said the bank should “be broken up.”

The states of California and Illinois and the city of Chicago have also suspended the bank from doing any government business in those jurisdictions — leading to questions from homebuyers whose loans are being serviced by Wells Fargo.

Mortgage lending could be collateral damage

But the CFPB’s consent order, daily news reports and two congressional hearings have failed to produce specific data on exactly how many Wells Fargo customers were harmed by the bank’s conduct, and the extent of the damages they have suffered.

This leaves many to wonder — has the scandal affected Wells Fargo’s mortgage customers?

The illegal conduct of Wells Fargo’s employees did not involve the bank’s mortgage division, which is the largest retail mortgage lender in the country, but “there will definitely be collateral damage on mortgage lending,” said Adam Deutsch, senior associate attorney at Westwood, N.J.-based law firm Denbeaux & Denbeaux.

“The CFPB didn’t quite talk about the number and type of customers who were affected, but this is information we are all looking out for, because if Wells Fargo opened accounts and made negative reports on consumers’ credit reports, this will create collateral damage that will impact both mortgage lending and other types of consumer lending,” said Deutsch, whose practice focuses on consumer rights litigation.

“If someone goes to get a mortgage loan, or an auto loan or a loan for their child’s college education, or even to refinance their home, they may find that their credit scores were negatively impacted by the bank’s actions.”

Considering recent reports that Wells Fargo may have fired employees who were involved in these practices as long as a decade ago, the impact to customers’ credit could be quite severe, depending on the amount of unpaid fees involved and how long ago the negative item first appeared on their credit report, Deutsch said.

“Most people will not even know they were impacted until they go to apply for some type of line of credit, and even then they may not know what their credit score really is,” he said.

“We know that probably only about a quarter of the American population regularly interacts with the credit system in a highly educated way. Only a small number of people know exactly what kind of interest rate they may be eligible for going into a situation.”

Wells Fargo and the CFPB are in the process of contacting all of the bank’s customers who may have been touched by the scheme, but Deutsch urged Wells Fargo customers to be empowered to pull their own credit reports — and he said they should be encouraged to do this well before applying for a mortgage loan or shopping for a home.

“A lot of people don’t realize that you can pull your credit history once annually for free, without having to pay for any services,” Deutsch said.

“If you are at the point of trying to buy or refinance a home, and you find these kinds of errors on your credit report, there are actions you can take to identify any errors or discrepancies that may prevent your transaction from moving forward.”

“First, consumers can obtain their free annual report from annualcreditreport.com — and not any other websites that purport to give them access to their credit report, because they may end up with paid subscription-based products later,” Wu said.

“They should look for errors, late payments on legitimate accounts and unauthorized Wells Fargo trade lines.”

Consumers should dispute any errors by sending letters to the three major credit reporting agencies, as well as Wells Fargo, “because if you only dispute the error directly to Wells Fargo, you don’t have any legal remedy under the FCRA,” Wu advised.

Under the FCRA, credit reporting agencies and furnishers of credit information have 30 days to resolve the dispute — although most disputes are often not resolved in round one, Wu said.

“The three credit bureaus and specialty reporting agencies defer to the furnisher of creditor information,” she said.

“If Wells Fargo comes back and says the account was authorized, the credit bureaus will automatically side with them. From there, consumers may need to enlist the help of an attorney to continue disputing the negative item.”

Deutsch noted that consumers who hire an attorney need not worry about spending a lot of money on litigation, as the FCRA has a fee-shifting provision.

“Congress set it up this way to encourage attorneys to take on this type of work and to help consumers who have limited resources,” he said. “We will take a small nominal fee for sending letters out to creditors and credit reporting agencies because if the consumer’s file is not corrected, we can file a lawsuit to compel the creditor and credit agency for false reporting.”

These financial concerns fall more into the laps of mortgage brokers than of real estate agents, so agents should be careful to do their due diligence in selecting their broker partners, Deutsch said.

“It’s important for agents to appreciate that their client is about to enter into a financial contract that could last 30 years,” Deutsch said.

“Even though you may not have a professional obligation to assist borrowers with credit issues, you can help them be as safe as possible going into that 30-year contract by looking into the business model of their mortgage broker, and know they are trusted, and not falling into some of the tricks we are still cleaning up from the financial crisis.”

The Wells Fargo scandal has also raised questions about how common cross-selling and employee incentive programs are at other banking institutions.

“The big question now is, are other bank customers being signed up for things without their authorization?” Deutsch said.

“This is something that happened with the deregulation of the banking industry. We know that banks can be involved in retail lending, mortgage lending and other different areas, so their incentive is to get borrowers involved in as many sectors of their business model as possible.”

That brought to mind a final word of advice from Deutsch, which is to encourage your clients to “diversify their banking and financial services.”

“Whenever someone is looking to get into the stock market or save for retirement, we tell them to diversify.

“Now, unfortunately, we know the same should be said for anyone doing business with a given bank,” he said. 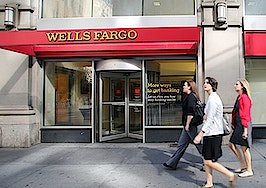 Mortgage startup Tomo now in 5 states, adds jumbo loans
Back to top
Thousands of real estate pros joined us virtually for Connect Now and you can access the replays with a 2022 bundle.Access Now×
Agent Appreciation Sale: Inman Select for only $85.CLAIM OFFER×
Inmanpot
Log in
If you created your account with Google or Facebook
Don't have an account?
Create an Account
Forgot your password?
No Problem