Fresh off a funding round, low-fee, Colorado brokerage Trelora has started outing commission data — again. The company is revealing how much compensation listing agents are offering buyer’s agents through the MLS. Registered users can access the data on Trelora’s website.

The company is revealing how much compensation listing agents are offering buyer’s agents through the MLS. Registered users can access the data on Trelora’s website.

The move is likely to rankle some in the industry, just as a previous attempt to display the data did in 2015.

“I’m sure we’ll take flak,” said CEO Joshua Hunt. “The industry is scared to death of us.”

Trelora — which charges all buyers a flat fee of $2,500 to $3,000, depending on service level — closed more than 700 transactions through the MLS in 2016, up by around 30 percent from the previous year, according to Hunt.

He added that the brokerage also did “not a shameful number” of deals off the MLS, but declined to disclose the exact number. 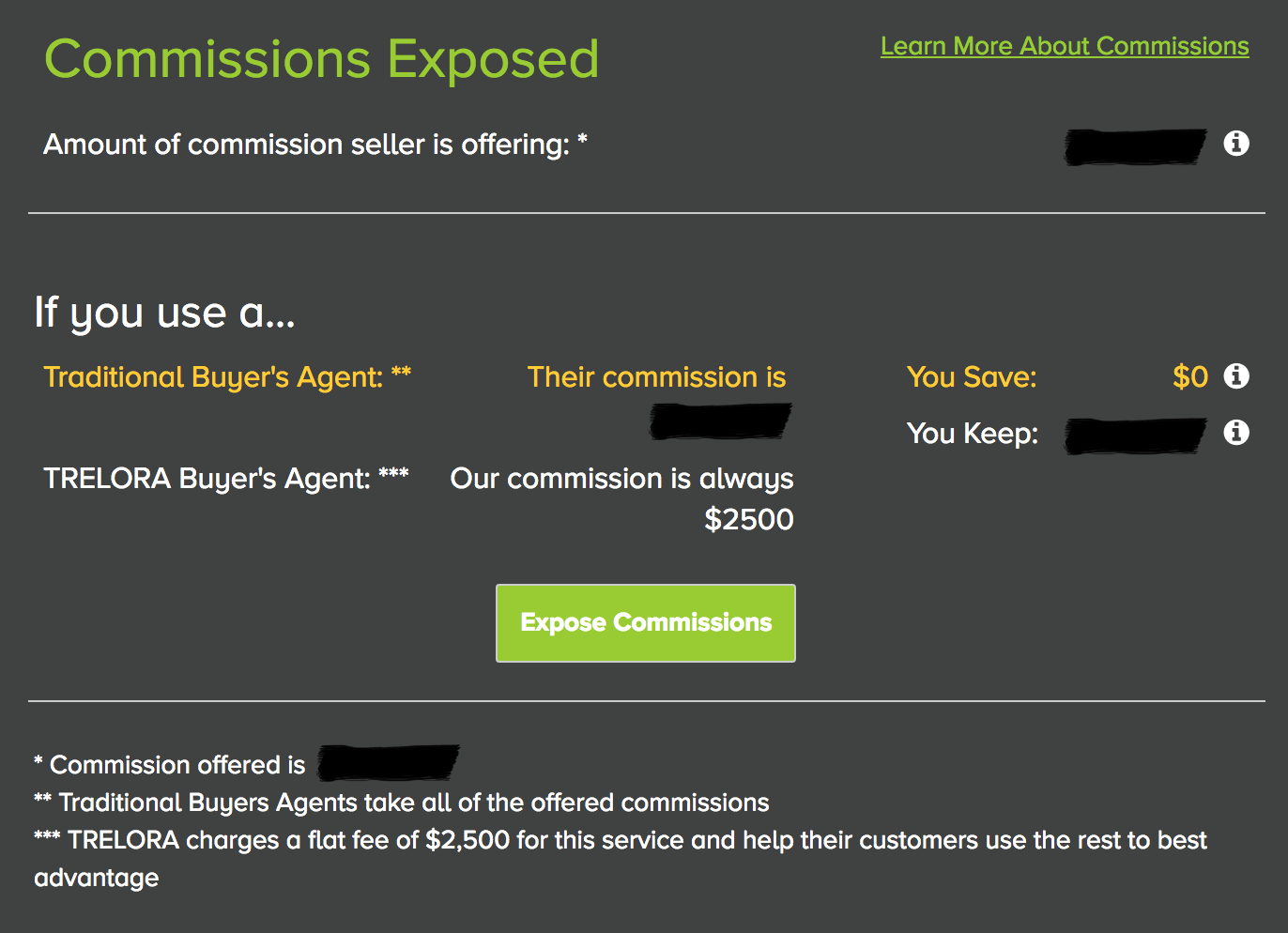 “Expose Commissions” module shown on a listing to an unregistered homes.trelora.com user. 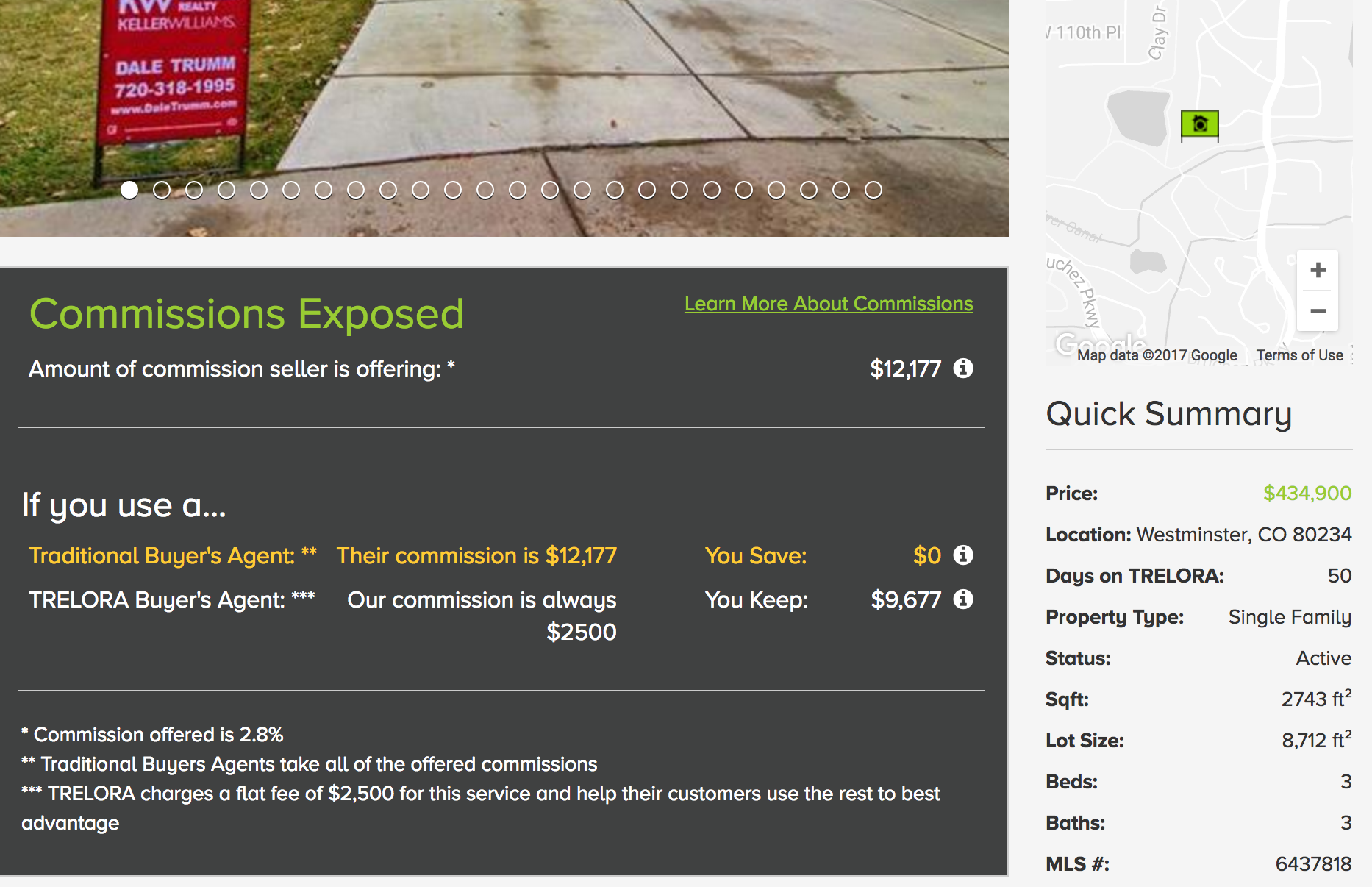 By shining a light on commission data, Trelora wants to spread awareness that buyer’s agents’ commissions are negotiable.

“This is a step of educating buyers … that you don’t have to let your buyer’s agent receive 2.5 or 3 percent,” Hunt said.

The last attempt, and what’s different

In 2015, Trelora made waves by publishing commission data on its website for all visitors to see.

But the startup quickly removed the data once the local MLS, REcolorado, sent a cease-and-desist letter. The letter alleged that Trelora had violated rules that govern the internet data exchange (IDX) feeds that local brokers use to display listing data on their websites.

This time, Trelora is only making the data available to consumers who sign a non-binding and non-exclusive buyer’s agency agreement by checking a box and registering a name, email address and phone number on the brokerage’s website.

“The argument was that we couldn’t disclose information to people we were not representing, and so we have built a special terms of service and agreement with the Colorado real estate buyer agency agreement,” he said.

Trelora also “built the database and code in such a way that that we’re honoring the agreement with IDX and REcolorado,” Hunt said.

Trelora has been in close contact with REcolorado, and the MLS is aware of how Trelora is showing commission data, he added.

REcolorado spokeswoman Deborah Shipley told Inman via email that the MLS is “currently reviewing” the commission information on Trelora’s site, and doesn’t currently see a violation of the National Association of Realtors’ “model rules.”

“Over the next several weeks, we will be thoroughly reviewing Trelora’s site to ensure it does indeed adhere to our rules,” she added, to include consulting with NAR and REcolorado’s legal counsel.

Visitors to trelora.com listings see a blacked-out number next to text that sits beneath a property’s asking price. The text reads: “Commission Offered.”

Users are also encouraged to register beneath a listing’s photo gallery, so they can see how much they would save on commission by using a Trelora agent. The site dangles the hidden information with the come-on “Expose Commissions” tab.

Visitors who register often learn that they will purportedly save tens of thousands of dollars if they buy with Trelora rather than with an agent who collects a listing’s full offer of compensation.

For example, a $1.595 million listing that offers a 2.8 percent commission to buyer’s agents informs registered users that they would save $42,160 by using a Trelora agent (assuming the traditional agent wouldn’t rebate any of the buy-side commission to their client).

Trelora closed a $4.4 million funding round in mid-December and plans to expand, though Hunt declined to reveal any of the markets in its crosshairs. 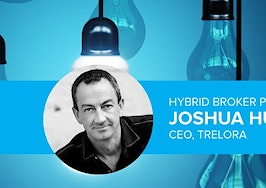 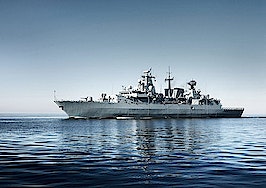