Mortgage rates skyrocketed on news that the Federal Reserve may begin to taper its stimulus program, jumping by their largest weekly margin since 1987, Freddie Mac reported.

Rates on 30-year fixed-rate mortgages averaged 4.46 percent with an average point of 0.8 percent for the week ending June 27, up from 3.93 percent last week and 3.66 percent a year ago, according to Freddie Mac’s latest Primary Mortgage Market Survey. 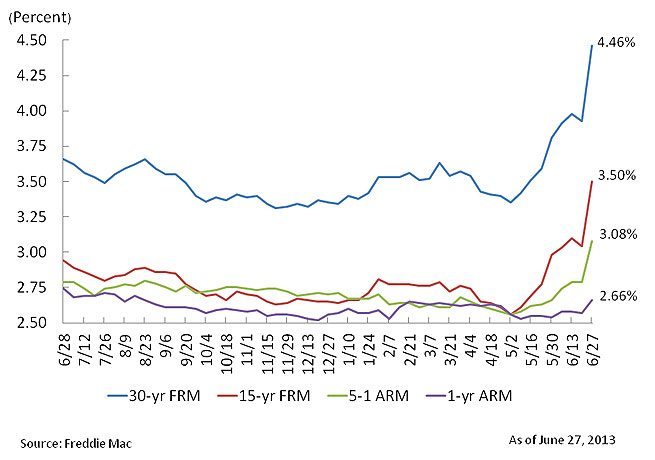 “Following Fed chief Bernanke’s remarks on June 19th about the possible timing of reduced bond purchases, Treasury bond yields jumped over the week and mortgage rates followed,” Frank Nothaft, vice president and chief economist at Freddie Mac, said in a statement. “He indicated that the Fed may moderate the pace of its buying later this year and end the purchases around the middle of 2014.”

“Higher mortgage rates may dampen some housing market activity, but the effect will be muted by the high level of buyer affordability, and home sales should remain strong. For instance, existing-home sales in May rose to its strongest pace since November 2009, and new-home sales were the most seen since July 2008. In addition, the 12-month growth in the S&P/Case-Shiller 20-city home price index for April of 12.1 percent was the largest since April 2006.” Source: Freddie Mac