Real estate marketing site Homegain.com moved up three places to sixth on the list from December 2008 to January 2009 and apartment-search portal MyNewPlace.com dropped from 19th in December to 16th in January, Hitwise also reported. 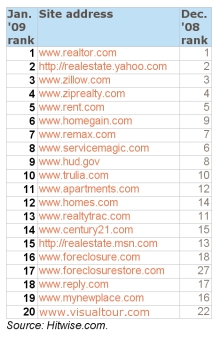 The Hitwise rankings are based on the market share of visits to real estate sites among the company’s sample of 10 million U.S. Internet users. The company tracked data for 3,247 real estate category Web sites in January.

Fast-moving sites — which made substantial gains in the Hitwise rankings during the four-month period ending January 2009, include: BostonRealEstate.com (up 1,189 places), LandToday.com (up 884 places), NewHomes.NJ.com (up 704 places), NeighborCity.com (up 474 places), VillageRealtyOBX.com (up 298 places), ResortVacationProperties.com (up 250 places), RealTimeRental.com (up 224 places), SunRealtyNC.com (up 154 places), HomeAway.com (up 22 places), and ForeclosureStore.com (up 10 places).