Loan servicers approved nearly three times as many short sales in the last three months of 2008 as they did in the first quarter of the year, but still completed close to six foreclosures for every short sale, according to a report issued by bank regulators today.

The report also showed that delinquencies continued to climb, with the biggest jump in prime mortgages, and that nearly half of borrowers granted loan modifications were seriously delinquent or in foreclosure within eight months.

Loan servicers approved nearly three times as many short sales in the last three months of 2008 as they did in the first quarter of the year, but still completed close to six foreclosures for every short sale, according to a report issued by bank regulators today.

The report also showed that delinquencies continued to climb, with the biggest jump in prime mortgages, and that nearly half of borrowers granted loan modifications were seriously delinquent or in foreclosure within eight months.

The worsening economy and job losses were seen as possible explanations for the high re-default rate, along with excessive borrower leverage, poor initial underwriting, and other "issues affecting consumer willingness to pay," the report said.

The U.S. Department of Labor today reported that unemployment rose to 8.5 percent in March, as another 663,000 Americans lost their jobs. Since the recession began in December 2007, 5.1 million jobs have been lost, with almost two-thirds of the decrease occurring in the last five months.

The data show modification strategies that don’t reduce monthly mortgage payments "run the risk of unacceptably high re-default rates," said Comptroller of the Currency John Dugan in a statement accompanying the release of the report. "They should only be used on a case-by-case basis where borrowers and servicers can have confidence that the modification is likely to be sustainable."

The findings bode well for the Obama administration’s "Making Home Affordable" loan modification and refinance initiative, Dugan said, because it is based on lowering monthly payments to achieve sustainable modifications.

The quarterly report on mortgage performance by the Office of the Comptroller of the Currency and the Office of Thrift Supervision includes data from nine national banks and four thrifts, and covers about two-thirds of all outstanding mortgages.

While lenders boosted the number of workouts by 11 percent during the fourth quarter, to 301,648, a growing proportion — six out of 10 — were payment plans, which critics say are less effective than loan modifications.

In a payment plan, arrears are often added onto the back end of a loan, and monthly payments aren’t reduced. The study said servicers may be reporting more "trial" modifications as payment plans.

About 91 percent of loans tracked in the report had been securitized and sold, and were being serviced on behalf of third parties. The re-default rate on those loans — 49.5 percent nine months after a modification — was significantly higher than loans held in servicer’s own portfolios (29.7 percent). …CONTINUED

Loan servicers "generally have greater flexibility to modify loans held on their own books, especially before default has occurred, than they have with respect to loans serviced for others, which are often subject to more rigid contractual limitations on modification," the report said.

That could also help explain the continued reluctance of loan servicers to approve short sales of properties rather than foreclose on them.

The report showed loan servicers increased the number of short sales approved in each quarter of the year, raising the total from 5,523 in the first three months of the year to 15,395 in October, November and December. Deeds in lieu of foreclosure doubled from 1,065 during the first quarter to 2,182 in the last.

Completed foreclosures jumped 65 percent from the first quarter to the third, peaking at 126,280 before falling 29 percent in the final quarter of the year to 89,634.

For every completed foreclosure, short sale, or deed in lieu of foreclosure during the fourth quarter, loan servicers initiated nearly three loan modifications or payment plans.

Looking ahead, the number of newly initiated foreclosures declined for the second quarter in a row, falling 6.5 percent from the third quarter to 262,906.

But the percentage of current and performing mortgages decreased from 93.3 percent at the end of the first quarter to 90 percent at the end of the fourth quarter. Delinquencies climbed across all categories of loans: prime, alt-A and subprime. The biggest percentage jump was in prime mortgages, with 2.4 percent of loans 60 days or more delinquent, up 115 percent from the 1.1 percent seriously delinquent rate in the first quarter.

The percentage of subprime loans that were seriously delinquent increased from 10.8 percent at the end of the first quarter to 16.4 percent by the end of the year. Serious delinquencies for alt-A loans grew from 5.2 percent to 9.1 percent during the same period.

The Federal Housing Finance Agency reported last month that the percentage of serious delinquencies among 30.7 million residential mortgages owned or guaranteed by Fannie Mae and Freddie Mac more than doubled from March to December, to 3 percent. Fannie and Freddie’s loan servicers repossessed about eight homes for every short sale they approved in 2008, taking back 145,183 homes (see story). 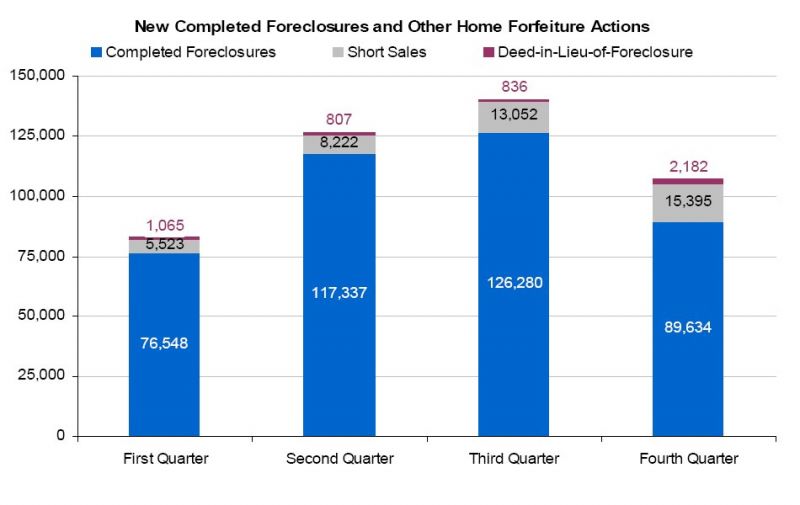