The venture, Prudential Real Estate Collaborative Innovation Partnership (PRECIP), will be a "collaboratory," or virtual lab "without walls," to marry the expertise of outside technology companies and the Prudential Real Estate network, the company said. Owned by Prudential Financial Inc., the network has about 60,000 sales associates and about 1,700 offices.

The venture, Prudential Real Estate Collaborative Innovation Partnership (PRECIP), will be a "collaboratory," or virtual lab "without walls," to marry the expertise of outside technology companies and the Prudential Real Estate network, the company said. Owned by Prudential Financial Inc., the network has about 60,000 sales associates and about 1,700 offices.

"It’s not a traditional laboratory in its own right. It’s a combination of three things: innovation, a research and development effort, and collaboration between experts in the (tech) industry and (real estate) practitioners. We think it should allow us to bring new tools to the market even faster," said Jim Mallozzi, the company’s chairman and CEO.

"It’s different from more traditional research because it utilizes network and collaboration tools to form research teams that in past approaches may not have shared a common research focus or seen how their various perspectives could easily come together around specific tasks," said Steve Van Anden, the project’s interim director and a longtime consultant to Prudential Real Estate.

The latter refers to search engines that display results based on word meaning rather than keyword page rank. The point is to actually answer a user’s question, such as, "What is the best Italian restaurant in San Francisco’s Nob Hill neighborhood?" — rather than give them the information to figure out the answer for themselves.

"If you ask Google a question, it doesn’t give you an answer, it gives you a list," Van Anden said. "We want to give (users) a very specific answer."

The company has already signed a letter of intent with Montreal-based virtual world developer Immersive Design Studio (IDS) to create one of the project’s first priorities: a virtual, immersive home tour. The company showed off a prototype of such a tour this week at the convention.

"This is actually ‘Avatar’ meets real estate. We demonstrated … how (two people) could both be in different rooms at opposite ends of the country and be holographically next to each other. Buyers can start to experience homes and what they would do with (a home) even before they actually see it," Mallozzi said.

While the tour prototype uses traditional navigation with a mouse or joystick, the project hopes to incorporate technology that IDS has already developed that tracks the body as it moves, Van Anden said. People will be able to project a to-scale version of a room onto a wall and "walk through" a room without clicking or wearing any special equipment.

"IDS has been working in ‘hybrid space’ trying to look at how you can merge the virtual and the physical where those forces are not opposed as one over the other. Hybrid space is the core of IDS research and development and especially for virtual house tours it makes a lot of sense," said Thomas Soetens, co-founder of IDS. …CONTINUED

Although the tours are not ready for release yet, Mallozzi said the project could be ready in the "not-too-distant future."

In the meantime, Prudential is seeking other potential tech partners for the effort and hoping to "connect the dots" between the real estate industry and other fields, like video gaming.

Van Anden said a key objective for the collaborative tech effort "is to dramatically increase the number of participants and perspectives that shape our research efforts."

The company is accepting applications from members of its own network who would like to participate in the project. The project has attracted a lot of interest already, the company said.

While the real estate company has consulted agents in its network about technology before, the project will give them "a more active voice" to set the company’s research agenda, Van Anden said.

"There will be many hubs in the collaboratory network, including PRERS offices across the country, technology partners, and importantly, the offices of participating brokers and sales professionals," he said.

The company has not projected a specific budget for the project, Mallozzi said, but he expects the project to attract investors over time.

The company does not necessarily anticipate expanding its overall research budget, but hopes to use its existing funds more effectively "by better leveraging … intellectual capital that exists across our network," Van Anden said.

"The commitment of our organization is not just financial resources, but intellectual and facilitation resources. Our consumers are even smarter than we are and there’s a new generation of buyers that are tech-savvy. (We’re) finding new … tools. It’s not about a budget, but how we’re going to run our company," Mallozzi said. 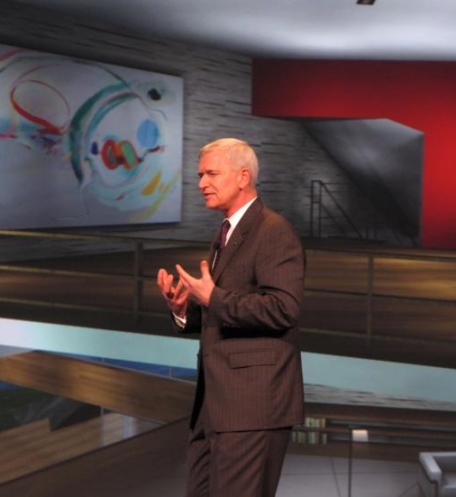 Jim Mallozzi, Prudential Real Estate and Relocation Services chairman and CEO, demonstrates a virtual home tour during a presentation at the company’s sales convention this week in Austin, Texas.