Ninety percent of real estate agents and brokers expect home prices to either fall or stay the same over the next six months, according to a survey by online real estate marketing site HomeGain.

HomeGain conducted the survey from Sept. 7-14, with participation from more than 1,100 real estate agents and brokers and 2,600 homeowners nationwide.

Ninety percent of real estate agents and brokers expect home prices to either fall or stay the same over the next six months, according to a survey by online real estate marketing site HomeGain.

HomeGain conducted the survey from Sept. 7-14, with participation from more than 1,100 real estate agents and brokers and 2,600 homeowners nationwide.

Of this quarter’s respondents, 48 percent of the real estate professionals and 33 percent of the homeowners think home prices will fall in the next half year, rising from 33 percent and 23 percent, respectively, who thought so in the second quarter. The same share of both groups expect home prices will remain flat in the next six months: 42 percent.

There were some optimists among respondents: 10 percent of real estate pros and 18 percent of homeowners expect home values to rise in the next half year.

"Real estate professionals and homeowners are taking a far more negative view on the direction of home prices citing current high inventory levels, continued foreclosures, the expiration of the tax credit and the general state of the economy," said Louis Cammarosano, HomeGain’s general manager, in a statement.

Three quarters of real estate pros said their homeowner clients’ home values have fallen in the past year, up from 66 percent in the second quarter but down from 81 percent in 2009’s third quarter.

"Prices have dropped so much, it is difficult for the sellers to price their homes to sell. The majority of the homes I have sold have been about 10 percent less than the asking price," commented respondent Karen Long of Altera Signature Properties in Brentwood, Calif.

Regionally, a smaller share of respondents in the West said their clients’ home values had decreased in the past year compared to other regions: 69 percent vs. 78 percent in the Southeast, and 77 percent in the Midwest and Northeast.

Sellers in the Southeast were most likely to think their home values would decrease in the next six months: 50 percent of respondents expected decreases, compared with 45 percent in the Midwest and 48 percent in the other two regions.

More homeowners believe their homes are worth more than their agent’s recommended listing price this quarter, 79 percent, compared with the second quarter’s 77 percent.

"There … continues to be an increasing disconnect between what homeowners and buyers think homes are worth," Cammarosano said.

When it came time to list the home this quarter, more than half either listed at about the same price the sellers believed their home to be worth (8 percent) or at a price less than 5 to 10 percent off the seller’s valuation (47 percent).

"Unfortunately, sellers are not realistic yet as to their home’s value. We can show every statistic we have access to, and sellers still seem to believe it applies to everyone but them," commented Rick Sandberg of Ryan Hill Realty in Naperville, Ill.

Industry professionals also indicated that 69 percent of their buyer clients thought available homes for sale were overpriced, up from 61 percent last quarter.

When homes finally sold, the vast majority — 81 percent — sold for less than the listing price, according to agent and broker respondents.

For 54 percent of respondents, the average difference in price between the home’s asking price and its selling price ranged from 5 to 10 percent.

Respondent Cyndee Haydon of Charles Rutenberg Realty in Clearwater, Fla., said most homes are overpriced by 20 percent or more when they are listed. "However, if you take the price at time of an accepted offer, the list-to-sold-ratio average is 92 percent. The problem lies in the 180 to 700-plus days it took to get there."

"The president’s policies are keeping people from buying or moving up. The foreclosures need to be bought first before we’ll see any upward trend. Unless something happens in November’s elections to stop the socialism, we’ll be stuck in this rut for years," commented Kimo Smigielski at Sandwich Isles Realty Inc. in Honolulu.

"Considering the condition the Bush administration/Congress put us in, I’d say Obama is doing as good as/better than could realistically be expected! Now, ask us how you think the banks are doing their jobs!" commented agent Judi Bryan in Bloomingdale, Ill.

Among homeowners, 44 percent strongly disapproved of the president’s performance and 17 percent somewhat disapproved. 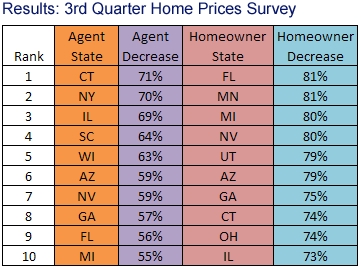 Note: Percentages show share of surveyed real estate agents and homeowners who believe home prices will drop in the next six months.