The foreclosure starts rate for borrowers with prime, fixed-rate mortgages set a new record high during the third quarter, the Mortgage Bankers Association said in releasing the results of its quarterly National Delinquency Survey.

As the pool of subprime and prime adjustable-rate mortgage (ARM) loans continues to shrink, unemployment is the greatest threat to homeownership for the 78 percent of borrowers whose homes were purchased with prime, fixed-rate mortgages or FHA-guaranteed loans.

The foreclosure starts rate for borrowers with prime, fixed-rate mortgages set a new record high during the third quarter, the Mortgage Bankers Association said in releasing the results of its quarterly National Delinquency Survey.

As the pool of subprime and prime adjustable-rate mortgage (ARM) loans continues to shrink, unemployment is the greatest threat to homeownership for the 78 percent of borrowers whose homes were purchased with prime, fixed-rate mortgages or FHA-guaranteed loans.

While the survey showed some improvement in delinquency rates, they’re likely to remain elevated until the unemployment picture improves, said Michael Fratantoni, MBA’s vice president of research and economics.

The delinquency rate for all mortgages on one- to four-unit homes fell to a seasonally adjusted 9.13 percent at the end of the third quarter, down from 9.85 percent in the second quarter and 9.64 percent a year ago.

If the survey’s results are extrapolated to an estimated 50 million outstanding U.S. first mortgages, the survey suggests that about 4.5 million homeowners were at least one payment behind on their mortgage but not yet in foreclosure.

"Although the employment report for October was relatively positive, the job market had improved only marginally through the third quarter, so while there was a small improvement in the delinquency rate, the level of that rate remains quite high," Fratantoni said in a statement.

"As we anticipate that the unemployment rate will be little changed over the next year, we also expect only modest improvements in the delinquency rate."

The percentage of loans in the foreclosure process at the end of the third quarter was 4.39 percent — about 2.2 million homes — down from 4.57 percent during the second quarter and 4.47 percent a year ago.

All told, the survey estimated that on a non-seasonally adjusted basis, 13.78 percent of mortgages were at least one payment past due or in foreclosure, which translates to about 6.9 million problem loans.

The foreclosure starts rate during the third quarter was 1.34 percent, up from 1.11 percent during the second quarter but still below the 1.42 percent level seen a year ago. 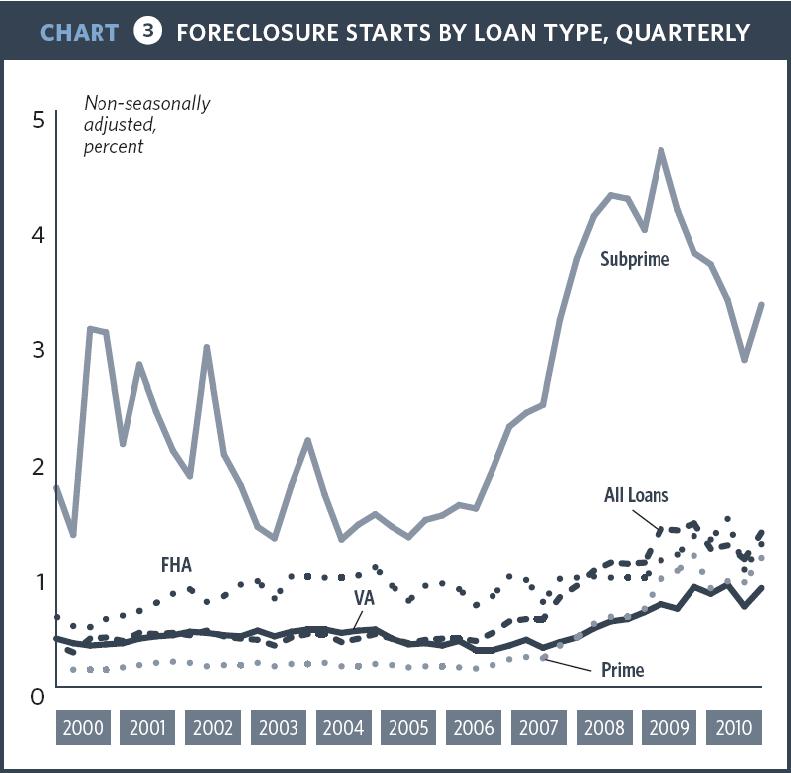 Thirty-three states saw increases in the rate of foreclosure starts compared to last year, with the largest increases coming in Washington, Indiana and South Carolina.

The MBA’s National Delinquency Survey tracked 44 million loans on one- to four-unit residential properties during the third quarter, representing approximately 88 percent of all first-lien residential mortgage loans. That’s about 680,000 fewer mortgages than a year ago, a reflection of reduced homeownership rates in the downturn.

The survey included 32.4 million prime loans, down 1.5 million loans from the same time a year ago. The number of subprime loans tracked by the survey was also down 430,000 from a year ago, to 4.3 million.

While some of those mortgages were paid off when homeowners sold or refinanced their home, the reduction in mortgage loans also reflects the toll of foreclosures, with many homes now in the hands of banks or investors who purchased them without a mortgage.

Partially offsetting the reductions in the number of prime and subprime mortgages, the survey is now tracking 6 million FHA loans, up 1.1 million from a year ago.

"One of the most important trends in terms of differences across products is the change in the composition of the market, with a rapidly shrinking pool of subprime and prime ARM loans, and a significant increase in the number and proportion of FHA loans," Fratantoni said.

While the delinquency rate for FHA loans was more than double the rate for prime, fixed-rate loans, FHA loans are performing about twice as well as subprime loans.

Prime, fixed-rate loans, which account for nearly 64 percent of all mortgages, were the best-performing loans, although the 5.17 percent delinquency rate for those mortgages would once have been considered almost unthinkable.

The increase in foreclosure starts from the previous quarter was also the largest ever seen for prime, fixed-rate loans, the MBA said.