Also today, the company announced the newest update to its iPhone app, which makes the

Also today, the company announced the newest update to its iPhone app, which makes the iPad and iPhone apps more similar in appearance.

Realtor.com stepped into the mobile space in January 2010 with the launch of its iPhone app. Ten months later, the site released apps for the Android and Windows 7 operating systems. Combined, the apps have been downloaded 3.6 million times, the company said. Active users jumped 79 percent from December through March.

The rise of mobile is changing the home shopping experience for consumers and agents, said Move CEO Steve Berkowitz.

"It’s going to continue to push the evolution of marketing offline to online. You think about the signposts in the lawn and marketing in the Sunday paper — those things are no longer necessary with apps like these," he said.

"You can get information about (a) home without even getting out of your car and picking up (a) flier."

That means that agents need to make sure the information they’re putting into their multiple listing service is as accurate, up-to-date, and detailed as possible, Berkowitz said.

If a home has a sub-zero refrigerator, for example, the agent should mention that, he said.

The Realtor.com iPad app allows users to see nearby homes for sale, open houses, and homes for rent.

Users can sort listings by price, number of photos, age of the listing, or by open house date.

Results can appear in a list that floats on top of a Google map or in a gallery view where photos are more prominent.

Listing pages include the ability to see property details, flick through photos, email an agent or a friend, share a listing on Facebook or Twitter, get directions to a listing from the user’s present location, and add personal notes and ratings.

"The consumer is significantly more informed than they have been in the past. There’s a lot of connectivity between the agent and the consumer before they even go out and look at homes. Consumers can rate the home, or they can say, ‘I don’t need to see this house or I’d love to see this house,’ " Berkowitz said.

The new iPad app also allows email shortcuts. A client — or, with the client’s permission, an agent — can enter the agent’s email address in the app so that every time that client sends an email, it goes directly to the agent.

The proliferation of mobile apps has also changed how agents and consumers communicate, Berkowitz said.

"In the past year, Realtor.com mobile apps have contributed to a 240 percent increase in consumer outreach to local agents, and open-house views have increased by 459 percent in just four months," said Errol Samuelson, Realtor.com’s president, in a statement.

Also, "in-app communication between agents and consumers has increased by 148 percent since December."

Berkowitz said of consumer behavior via the mobile apps, "We will see less emails on a Sunday, but that’s one of the highest phone call days. Mondays are high on email. You actually can see that agents are out on the weekends with their customers," he said.

"The single biggest traffic day on the app is Sunday. Thursday and Friday are the lowest."

IPad app users can also see saved listings and searches, recently viewed listings, and recent searches under a My Real Estate section. Users who register and sign in can sync their favorite listings with Realtor.com.

The app also includes map search tools Area Highlighter and Area Scout. Area Highlighter allows users to draw a line with their finger on a map for listings within a particular, self-defined area. These can be whole neighborhoods or even a single block.

Area Scout populates listing results on a map either as the user drives around a neighborhood or moves the map within the app with their finger.

Apple’s iOS platform, the operating system for iPad, iPhone and iPod Touch devices, has a combined reach of 37.9 million among all mobile phones, tablets and other connected media devices, outreaching the Android platform by 59 percent, according to a recent report from comScore. 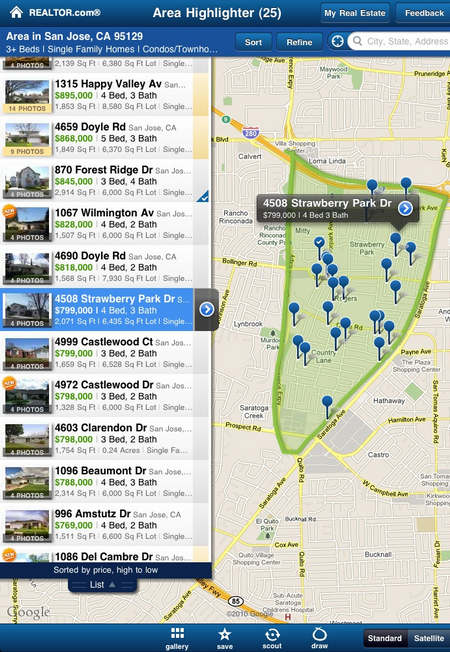