Despite a seasonal bump, home prices are poised to end the year in the red, according to a report from data and valuation firm

Despite a seasonal bump, home prices are poised to end the year in the red, according to a report from data and valuation firm Clear Capital, released Thursday.

On a quarterly basis, the index inched up a slight 0.6 percent from July-October compared to April-June. The index’s quarterly data is based on rolling quarters, comparing the last four-month period to the previous three-month period.

"Short-term gains have been nearly eliminated while longer-term performance measures point to mostly negative territory through the turn of the year," said Dr. Alex Villacorta, Clear Capital’s director of research and analytics, in a statement.

"With current tepid demand expected to weaken even more, consumer confidence at record lows, and as the distressed inventory continues to flow into the market, we can expect another long winter as the housing market will truly be put to the test against these downward forces," Villacorta added.

According to the Clear Capital report, three out of four U.S. regions experienced annual home-price decreases, with the West seeing the biggest drop, down 5.5 percent. The West was also the only region to see a quarterly price decline, falling 1 percent.

Only the Northeast experienced a year-over-year price uptick, 1.2 percent. The Midwest posted the biggest quarterly gain for the fourth straight month, 2.6 percent, the report said. 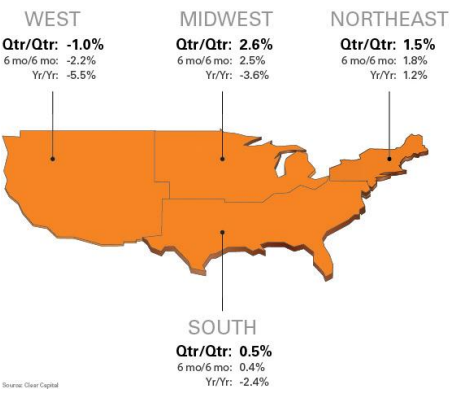 The Midwestern metro area of Cleveland-Elyria-Mentor, Ohio, was the top-performing market of 50 major metros in this month’s report, with a 6.2 percent quarterly price increase. The Cleveland area has held the top position for three straight months, but prices there are still 58.1 percent off their first-quarter 2005 peak, the report said.

The South accounted for eight of the 15 top-performing markets, with four Florida markets added to the list in this month’s report due to a declining share of bank-owned homes (REOs) sold compared to all homes sold.

While such "REO saturation" remains high overall for the four major Florida markets — Jacksonville, Tampa, Miami and Orlando — REO rates in these four markets have dropped an average of 16.2 percentage points since first-quarter 2011, according to the report. 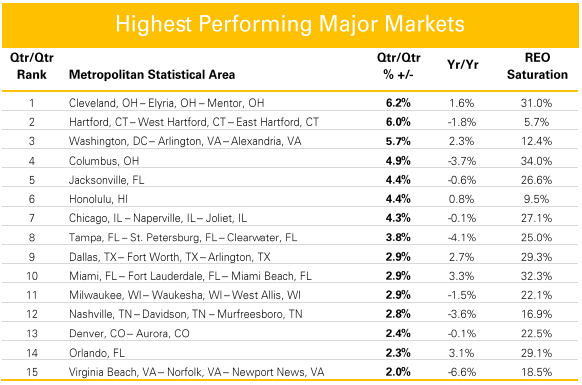 Of the 15 lowest-performing markets, 10 are in the West, and most of those are in California. All 15 markets posted quarterly declines, with Las Vegas topping the list for the second straight month. That area had the highest REO saturation rate among the 15 metros, at 49 percent.

On a year-over-year basis, the Seattle-Tacoma-Bellevue, Wash., metro area saw the biggest price decline, down 14.4 percent. 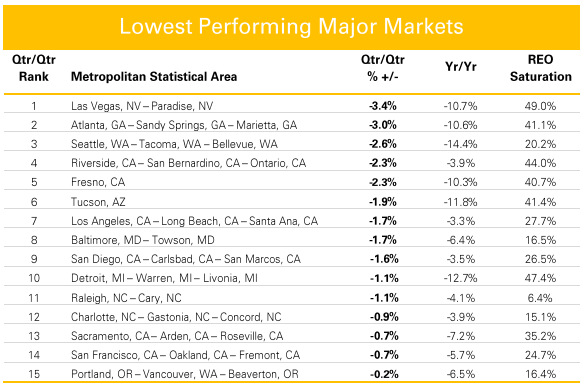