The newest European maneuvers have triggered a stock rally, but credit markets are not buying the deal. The small upward pressure on U.S. yields is preparatory to a big borrowing binge by the Treasury next week, not anything fundamental.

Through the fog of Europe, dominating and concealing everything, one pattern is clear: The U.S. economy is doing better than forecast 90 days ago, and the rest of the world is in some stage of sinking.

The newest European maneuvers have triggered a stock rally, but credit markets are not buying the deal. The small upward pressure on U.S. yields is preparatory to a big borrowing binge by the Treasury next week, not anything fundamental.

Through the fog of Europe, dominating and concealing everything, one pattern is clear: The U.S. economy is doing better than forecast 90 days ago, and the rest of the world is in some stage of sinking.

The two surveyors of U.S. consumer confidence have each reported November-December gains. New claims for unemployment insurance last month were the lowest since February, and the small-business organization National Federation of Independent Business has also found the first upturn in hiring by small businesses since 2008.

The Fed’s Z-1 report noted a couple-trillion-dollar drop in U.S. household net worth in the third quarter; however, all of it was attributable to stock market losses then, all of which have been recovered.

The "perma-optimists" say that emerging economies will carry the globe. Uh-huh. China’s 18 months of inflation-fighting has dampened prices, but also hosed down its economy. Brazil’s gross domestic product grew 7.5 percent last year but went negative in the third quarter.

The European predicament has been a source of amusement while markets there and everywhere for two years have tried to anticipate whatever new system will follow the euro-folly. As of Thursday night, it is no longer funny.

Germany has no answer to anything except to force unsustainable austerity on the weak dozen of the 17 nations in the euro currency. In their frailty, they dare not object. Feckless France for 150 years has asserted power that it does not possess, now coattailing German dragoons.

Beyond the currency zone lie another 10 nations, together comprising the European Union — a fantastic bureaucratic boondoggle based in Brussels. On Friday, it was minus one: the United Kingdom.

Once applying force, Germany has never known when to stop. Germany and France have long envied the city of London, second only to New York as a financial center. Among the fiscal-union treaty changes jammed at the EU-27 Friday night: the U.K. would lose protection from EU regulations, which would dismantle the city and reassemble it in Paris and Frankfurt.

To U.K. Prime Minister David Cameron’s great credit, despite the risk to U.K. exports — half of which go to Europe — he told French President Nicolas Sarkozy and German Chancellor Angela Merkel to bugger off.

Financial markets had been wagering on euro-breakup since July, each week guessing at the precipitating event.

First we expected sovereign-debt default as a catalyst for collapse, but just enough aid has been provided to the weak to prevent it. In July began the greatest bank run of all time, transcending even post-Lehman Brothers’ here, and markets bet on a banking collapse as endgame.

European banks have indeed collapsed, but the husks are held open by European Central Bank funding alone (example: In November, U.S. money-market funds pulled 68 percent of their money from French banks), and the absurd notion that all sovereign debt will be repaid at face value and in euros.

German muscle will prevail until European economies are crushed by austerity and tax revenue falls out from under budgets. That will take awhile.

Marking the absurdity of this blockheaded pursuit: Several sources report authorities in Ireland, Greece and others inquiring about capacity to print new local-currency banknotes. Every investment house is handicapping the values of local currencies, post-breakup.

Emails circulate discussion of the "lex monetae" (Latin for "monetary law") rules governing who owes what after currency change.

There is nothing holding Europe together except a political superstructure that will be thrown from power when the unified Europe project fails. Thus, no matter how transparent the folly and failure, the harder that class tries to preserve the project.

The lesson for us, far more powerful than caution against financial profligacy: the more your political structure detaches from economic reality, the greater the danger.

That hazard is masked here, now, by European distress. Cash flows to us for safety, keeping interest rates low, and global weakness inhibits inflation. We’ll take that as long as possible.

"Improvement" in confidence is relative. 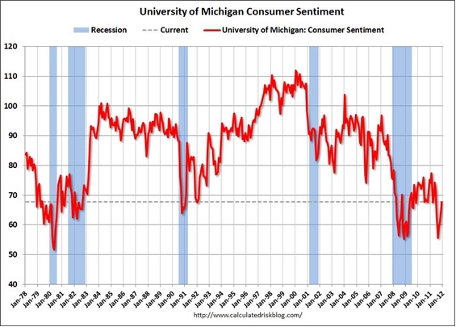 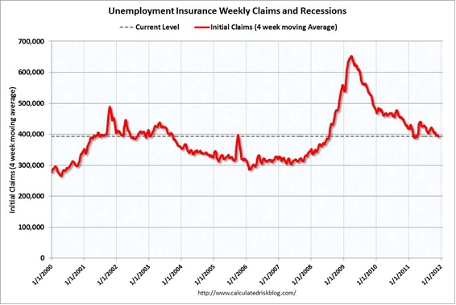