Foreclosure-related sales accounted for 23 percent of all U.S. home sales in the second quarter, up from 19 percent in second-quarter 2011, according to a report

Foreclosure-related sales accounted for 23 percent of all U.S. home sales in the second quarter, up from 19 percent in second-quarter 2011, according to a report released today from foreclosure data aggregator RealtyTrac.

For the first time in two years, the average price of a foreclosure-related property saw an annual increase in the second quarter: up 7 percent to $170,040. That’s also the biggest year-over-year jump since fourth-quarter 2006.

The increase reflects tight inventory and rising prices for overall homes nationwide; the median price of an existing home rose annually for the fifth straight month in July, according to the National Association of Realtors.

"The second quarter sales numbers provide solid statistical evidence of what we’ve been hearing anecdotally from real estate agents, buyers and investors over the past few months: there is a limited supply of available foreclosure inventory to choose from in many markets," said Daren Blomquist, RealtyTrac’s vice president, in a statement.

"Given this shortage of supply and the seasonally strong buyer demand in the second quarter, it’s no surprise that the average foreclosure-related sales price increased both on a quarterly and annual basis."

Despite the increase, however, homes in foreclosure or bank-owned (also known as real estate-owned, or REOs) sold for 32 percent less, on average, than traditional homes, up from 30 percent a year ago.

While REO sales outnumbered preforeclosure sales by 9,833 in the second quarter, that is the smallest gap between the two since third-quarter 2007, RealtyTrac said.

"The increase in short sales of properties that have not even started the foreclosure process indicates that lenders are moving further upstream to deal with their distressed inventory, thereby avoiding the increasingly complex and lengthy foreclosure process altogether."

In the second quarter, sales of homes either in default or scheduled for auction, called preforeclosure sales, fell from their three-year high in the first quarter to 107,298. That’s down 9 percent from a year ago.

Preforeclosure sales, often short sales, made up 11 percent of overall sales last quarter, up from 8 percent in second-quarter 2011. They typically took 319 days to sell after starting the foreclosure process, up from 245 days a year ago, and sold for an average $185,062 in the second quarter, down 1 percent on an annual basis. 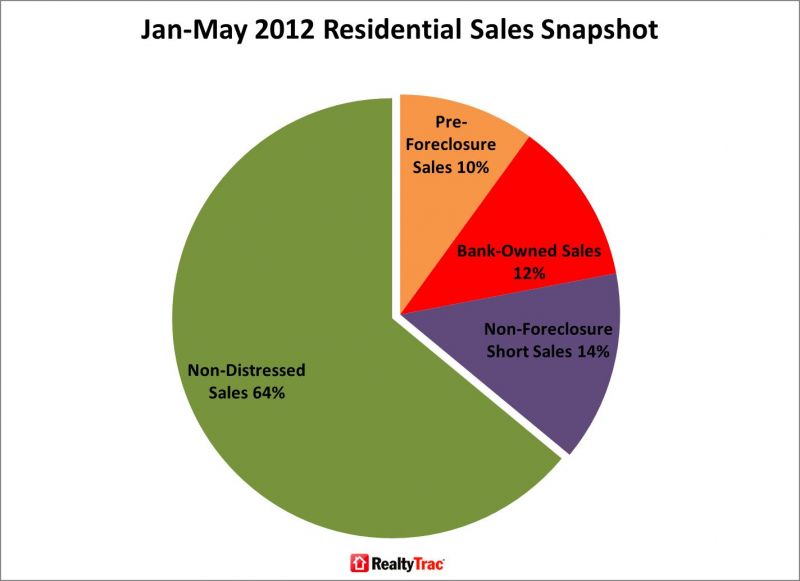 By contrast, the average REO sold for 10 percent more on an annual basis last quarter, at an average of $155,892. REO sales fell by nearly a third last quarter, 31 percent year over year, to 117,131, and accounted for 12 percent of overall home sales. Bank-owned homes also took longer to sell in the second quarter, an average of 195 days compared to 178 days in second-quarter 2011.