In the first four months following the signing of a $25 billion settlement with the nation’s five largest mortgage servicers over so-called "robo-signing" practices, the vast majority of the relief banks have provided has been in the form of short sales, according to a progress report released Wednesday from the settlement’s monitor.

Banks are relying heavily on short sales to meet their obligations under the terms of a $25 billion settlement with the nation’s five largest mortgage servicers over so-called "robo-signing" practices. That’s according to a progress report from the settlement’s monitor detailing the first four months of implementation.

The terms of the settlement require the five servicers — Bank of America, Citi, JPMorgan Chase, Wells Fargo and Ally Financial — to provide about $17 billion in homeowner relief, including short sales, loan modifications and principal reductions; and $3 billion to help underwater borrowers refinance.

As a group, the five banks reported providing a total of 137,846 borrowers with $10.56 billion in relief during the four months through June — an average of about $76,615 per borrower.

The vast majority of that relief was in the form of short sales, in which the servicer agreed to allow borrowers to sell their homes for less than the amount owed on the mortgage, or deeds in lieu of foreclosure, in which borrowers hand over all interest in the property to the lender to avoid foreclosure proceedings. Servicers waive any unpaid principal balance under either option.

Because the settlement allows loan servicers to receive credit when they approve sales that include forgiveness of a portion of underwater homeowners’ debt, some industry observers predicted the settlement would boost the number of short sales offered by banks.

Sales of homes in the foreclosure process, but not yet bank-owned — typically short sales — first began increasing in January and reached a three-year high in the first quarter, according to foreclosure data aggregator RealtyTrac.

The ramp-up of short sales may not last, however, if a key federal law expires as scheduled on Dec. 31. The Mortgage Forgiveness Debt Relief Act prevents borrowers from having to pay taxes on certain types of forgiven mortgage debt. If the law lapses, homeowners would have less of an incentive to pursue short sales because any amount forgiven would be considered taxable income.

Nonetheless, Capitol Hill observers expect Congress to ultimately pass an extension of the law before the end of the year, the Wall Street Journal reported.

The Office of Mortgage Settlement Oversight, headed by former North Carolina Commissioner of Banks Joseph A. Smith, is in charge of reviewing and certifying servicers’ fulfillment of the terms. The office does not monitor the approximately $5 billion in direct payments to governments mandated by the settlement.

The $10.56 billion in relief that servicers reported providing through June 30 cannot be used to evaluate servicers’ progress toward their $20 billion obligation, Smith said.

Servicers may receive partial or full dollar-for-dollar credit toward their obligations, depending on the type of relief provided. Consequently, borrowers may end up receiving considerably more than the $20 billion in relief required by the settlement.

The relief activities evaluated in the report represent gross dollars that have not been subject to calculation under the crediting formulas in the settlement agreement, Smith said. Nonetheless, the preliminary report paints a broad picture of the types of relief offered by servicers thus far. 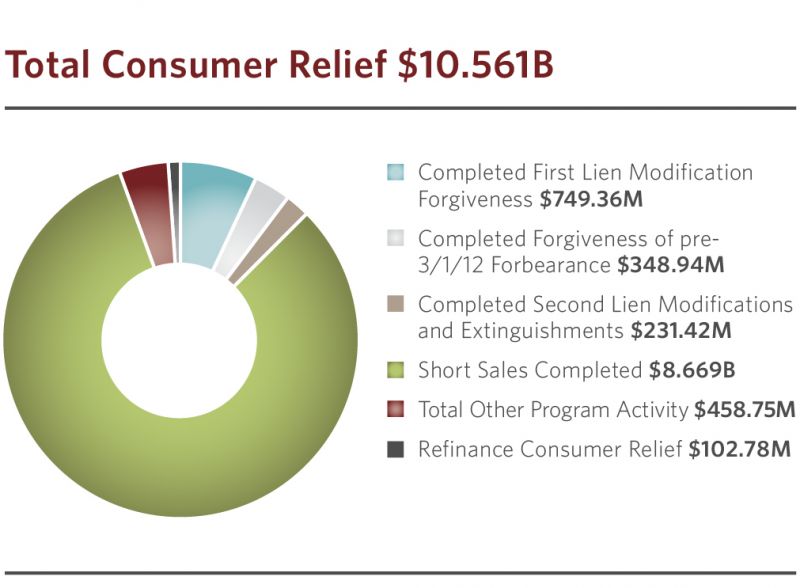 The second most popular type of relief reported by servicers: completed first-lien loan modifications for 7,093 borrowers, including $749.4 million in loan principal forgiveness averaging about $105,650 per borrower.

In the four months through June, servicers refinanced 22,073 home loans, providing annual relief estimated at about $102.8 million due to an average annual interest rate reduction of about 2.1 percent, the monitor report said, saving borrowers an estimated $388 on interest monthly on average.

Other program activities totaled $458.8 million in relief to 24,353 borrowers, averaging $18,840 per borrower. In addition, 60,151 borrowers had either been approved for or were actively participating in trial loan modifications, representing $6.9 billion in potential relief.

In addition to detailing their progress regarding consumer relief, all five servicers also reported completing a significant share of the 304 servicing standards they are required to implement under the terms of the settlement. These include standards related to customer service, anti-blight efforts, service member protection, tenant rights and loss mitigation.

There were 56 standards that all five servicers reported having implemented, including establishing a single point of contact for each borrower potentially eligible for relief due to default risk or delinquency and ensuring the integrity of foreclosure documents.

All five servicers also reported participating in the development and implementation of a nationwide loan portal for consumers. Both Ally Financial subsidiary GMAC Mortgage and Bank of America have partnered with Hope LoanPort to roll out a Web portal that allows housing counselors to transmit completed foreclosure alternative applications on behalf of borrowers to mortgage servicers online.

In the report, the Office of Mortgage Settlement Oversight invited any borrowers or any professionals representing them who experience what they believe are servicer violations of the required standards to contact the office through its website.

Smith said in the report that the office had received nearly 1,300 complaints from consumers since May, nearly three-quarters of them concerning the loan modification process, customer service and foreclosure documentation.

The office has also received 118 complaints from professionals, including Realtors, on behalf of homeowners, Smith said. Bank of America has been the subject of more complaints than any other servicer by far. 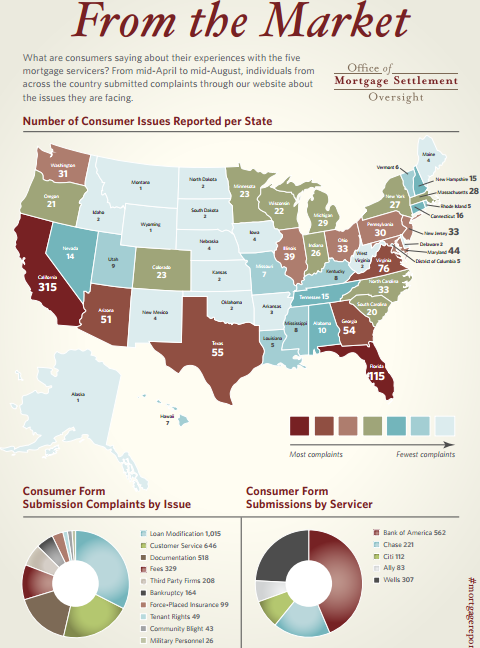 Wells Fargo has the second-biggest obligation: $3.4 billion in nonrefinance relief and $903 million in refinance relief. So far, the bank has reported meeting $1.04 billion in total relief, largely through short sales and some principal reductions. The amount of relief offered through refinancings was estimated at about $39 million.

Chase is required to provide nearly $3.7 billion in nonrefinance relief and $537 million in refinance relief, and thus far reports meeting the bulk of that obligation in gross dollar terms: $3.01 billion. The vast majority of the relief provided was through short sales ($2.4 billion). Principal reductions and refinancing accounted for nearly $367 million and $44 million of the relief, respectively.

Servicers are required to submit quarterly reports to the states and send copies of the reports to Smith starting no later than Nov. 14. Smith will issue his first official Monitor Report, including servicers’ satisfaction of consumer relief requirements, in April 2013.

To encourage the servicers to make substantial progress in the first year of the settlement, servicers will receive an additional 25 percent credit for any first or second lien principal reductions or credited refinancing activities that take place within the first 12 months after March 1, 2012, the report said. Servicers must fulfill their relief obligations entirely within three years or face a penalty of 125 percent of the remaining unmet amount.