A fund used to support the Federal Housing Administration’s single-family mortgage and reverse mortgage insurance programs ended fiscal year 2012 with a $16.3 billion deficit, according to an annual report submitted to Congress today.

The shortfall raises the specter that the agency will require a taxpayer bailout next year for the first time in its 78-year history.

A fund used to support the Federal Housing Administration’s single-family mortgage and reverse mortgage insurance programs ended fiscal year 2012 with a $16.3 billion deficit, according to an annual report submitted to Congress today.

The shortfall raises the specter that the agency will require a taxpayer bailout next year for the first time in its 78-year history.

In order to avoid a bailout, FHA will raise annual insurance premiums, sign off on more short sales, streamline sales of foreclosed properties, offer "deeper levels" of payment relief through its loss mitigation program, expand sales of delinquent loans, and, for new loans, reverse a policy instituted in 2011 that canceled required premium payments after loans reached 78 percent of their original value.

Next year, FHA plans to raise the annual insurance premium paid by borrowers on an FHA loan by 10 basis points, or 0.1 percent, which is expected to add $13 a month to the average borrower’s monthly payments.

The agency has also vowed to expand its sales of delinquent loans under its Distressed Asset Stabilization Program, committing to sell at least 10,000 such loans per quarter over the next year. Because such sales require investor purchasers to delay foreclosures for a minimum of six months, they represent an opportunity for borrowers to possibly avoid foreclosure while reducing FHA’s costs, according to the U.S. Department of Housing and Urban Development (HUD), of which FHA is a part.

The agency has taken steps to strengthen its capital reserves in recent years, including raising mortgage insurance premiums three times in 2010 and again earlier this year. The agency has also tightened credit standards and prohibited seller funding of buyer down payments, a practice the agency now estimates will cost it more than $15 billion on loans issued before 2009.

"While the loans made during this administration remain the strongest in the agency’s history, we take the findings of the independent actuary very seriously," said FHA Acting Commissioner Carol Galante in a statement.

"We will continue to take aggressive steps to protect FHA’s financial health while ensuring that FHA continues to perform its historic role of providing access to homeownership for underserved communities and supporting the housing market during tough economic times."

In today’s report, the FHA said its capital reserve ratio, which measures reserves in excess of what’s needed to cover projected losses over the next 30 years, had dropped to -1.44 percent from an already slim 0.24 percent in 2011. Congress requires the agency to maintain a 2 percent ratio — a mandate the FHA now projects it will meet in 2017, up from 2014 in last year’s projections. 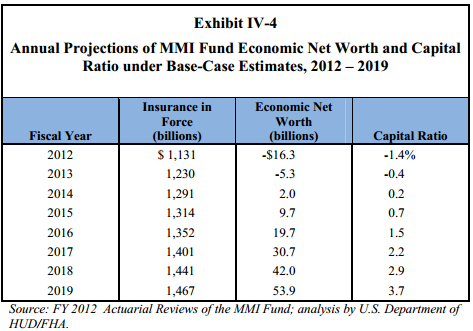 HUD said this year’s deficit "does not mean FHA has insufficient cash to pay insurance claims, a current operating deficit, or will need to immediately draw funds from the Treasury." The deficit, calculated by an independent actuary, also does not take into account an estimated $11 billion in capital accumulation expected by the end of fiscal year 2013.

"Coupled with the $11 billion in additional capital from expected new insurance guarantee volumes in fiscal year 2013, we believe it is possible to return the (fund’s) capital ratio to a positive level within the year, and reduce the likelihood that FHA will need to call upon the Treasury for any special assistance this fiscal year," wrote HUD Secretary Shaun Donovan in the report.

Whether FHA actually ends up needing a bailout will be determined not by this report, but by a valuation of the fund made for the president’s budget proposal for fiscal year 2014 to be released in February. A final decision on whether to draw funds for FHA from the U.S. Treasury will be made in September.

This year’s report projections are less sanguine than last year’s because of changes in its economic modeling, lower interest rates that have spurred refinancings and yielded lower premiums, and lower expectations for home prices, which turned around later than projected this year. Appreciation estimates do not include home price improvements since June.

The Center for American Progress (CAP), which describes itself as a nonpartisan research and educational institute, said today’s news was "almost inevitable" after the FHA stepped in after the housing bubble burst and private capital fled the housing market.

"By living up to its congressional mandate to provide support to the housing market in hard times, the Federal Housing Administration not only funded home loans for 7 million families, but prevented even more catastrophic home price declines," said Julia Gordon, CAP’s director of housing finance and policy, in a statement. "Such declines could have cost 3 million additional jobs and sent our economy spiraling into a double-dip recession."

Gordon noted that FHA still has more than $30 billion to settle claims, but federal budgeting rules require the agency to hold enough capital to cover all claims over the next 30 years.

Debra Still, chairman of the Mortgage Bankers Association, agreed that FHA plays a crucial role in today’s market, particularly since the agency is nearly the sole backer of credit for first-time buyers with less than 20 percent down payments.

"These buyers are a necessary support for the housing market. While there is near-unanimous agreement that FHA’s role in the single-family housing market today is too large, we must remember that the housing market would be far worse off, today and in the future, without FHA," Still said in a statement.

She added that MBA stands ready to work with policymakers to protect the fund and enable FHA to continue to perform its mission in the single-family market. She cautioned, however, that "ensuring the right balance" in forthcoming regulations defining rules for a qualified mortgage (QM) and a qualified residential mortgage (QRM) were important for future credit availability.

"For example, a final QM rule could drive an even higher share of the single-family market to FHA if it is not carefully crafted to protect consumers while ensuring the availability of credit from private sources," Still said.

"More broadly, the best medicine for FHA is a steadily growing housing market with stable home price appreciation, a less likely outcome if the rules cause lenders to increase cost or tighten qualification requirements for borrowers."

The regulations are under the aegis of the Consumer Financial Protection Bureau (CFPB), which postponed action on both rules in June after protests from Realtors, builders, banks, unions and consumer groups. Under Dodd-Frank, the CFPB is required to issue the qualified mortgage rule by Jan. 21, 2013.

The FHA has repeatedly said it will not require a taxpayer bailout. The National Association of Realtors has supported that stance, and urged Congress not to take steps that might discourage homebuyers, such as raising FHA minimum down payment requirements.

Earlier this year, the FHA got some breathing room after receiving a one-time payment of almost $1 billion from a $25 billion national mortgage settlement with the nation’s five biggest loan servicers.

The government has since sued one of the loan servicers, Wells Fargo, for "hundreds of millions of dollars" due to alleged "reckless origination and underwriting of its retail FHA loans over the course of more than four years, from May 2001 through October 2005." The bank claims that the lawsuit violates the terms of the $25 billion settlement and has asked a federal judge to throw the case out.