In the absence of significant economic data or market movement, and in the presence of more economic and policy confusion than ever in my lifetime among civilians and professionals alike — here an early jump on prospects for the new year.

All optimistic outlooks have housing as the primary ingredient, which is true as far as obvious thinking goes. We have all-time low rates and affordability, and the pig of distressed resales is departing the python in tidy bacon slices, not a mass, and slowly.

In the absence of significant economic data or market movement, and in the presence of more economic and policy confusion than ever in my lifetime among civilians and professionals alike — here an early jump on prospects for the new year.

All optimistic outlooks have housing as the primary ingredient, which is true as far as obvious thinking goes. We have all-time low rates and affordability, and the pig of distressed resales is departing the python in tidy bacon slices, not a mass, and slowly.

However, in simple math, to get to a higher level of sales and prices will require growth in aggregate mortgage balances. Instead they are shrinking, the Fannie-Freddie conservator standing on that hose. And now the FHA faces an existential battle, to be punished for lending when no one else would, and suffering losses now.

When we see the mortgage supply rising, then housing will be able to lead. Until then, we have a problem traditional at this season: Santa is stuck in the chimney.

Then we have the Fed’s epic new promise to buy $1 trillion-worth of Treasurys and mortgage-backed securities next year. Some worry that a flood of cash will trigger inflation, or new bubble-buying of stocks, or pigs, or some other damned thing.

However, in a recurrent theme looking forward, Fed cash cannot enter the real economy until the financial system uses it to make loans. Not. Until then the best the Fed can do is to hold down rates.

"Dear, did you say something?" No, but I thought I heard a funny noise over by the fireplace.

Another line of hope goes to the consumer. Indomitable. Resilient. Deleveraged. I would love to believe that, but the average household is still tapped out.

Median income for a family of four has fallen 10 percent in the last five years. Too much net worth was lost in the housing fizzle, health insurance premiums and tuition have defied gravity, and so households desperately need increased income. But that increased income depends on a rising economy, which depends on the, ummm… consumer?

"Honey, it was so thoughtful of you to build a fire for us. The nice fireman at the door says that after they put it out we should have the chimney checked."

Europe announces to itself weekly that the worst is over. That its economy will begin to recover next year. That it is taking very meaningful steps toward unified action although these measures will require some additional negotiation, treaty re-ratification, and rather a lot of someone else’s money.

The Cliff, about which so many seem so preoccupied… put it aside. On Dec. 31 the Cliff will or won’t, but this Cliff is just the first in a series ahead. Either Obama’s soak-’em or Boehner’s cut-’em at maximum would result in an annual deficit reduction of about $130 billion — in an annual deficit of $1 trillion.

The weird part about the Cliff adjustments ahead is the disappearing money. Tax increases are routine, but usually result in increased spending.

First have no doubt that these are tax increases, not merely ending a tax cut: the Bush brackets have been law longer than the Clinton ones were. Nor believe that the rich will pay "a little bit more," or will not feel the bite — $100 billion a year is real dough, as will be the next two similar hikes via tax reform.

The bite is clear, but the odd part is hidden: New tax money will replace money presently being borrowed, and spending will decline simultaneously in any semi-balanced deal.

"Darling, do you remember when you heard something by the fireplace last winter? I don’t think the living room smells so good."

This family drama is perfectly human. We have never been in this situation before, and our puzzlement at what might be the matter — and what to do — is appropriate.

However, I do wish those in authority this holiday season would rent the movie Christmas Vacation, and study the scene in which Clark Griswold can’t figure out why his lights won’t come on and stay on. Some of this is hard, but some is not.

Gold is up to something. Or going down to it. This chart has not updated to show today’s drop to $1,644; although there is considerable support at $1,600, it is now a lousy set of technicals.

How lousy? Look at the longer-term chart, next one below. Hyperbolae tend not to end well. 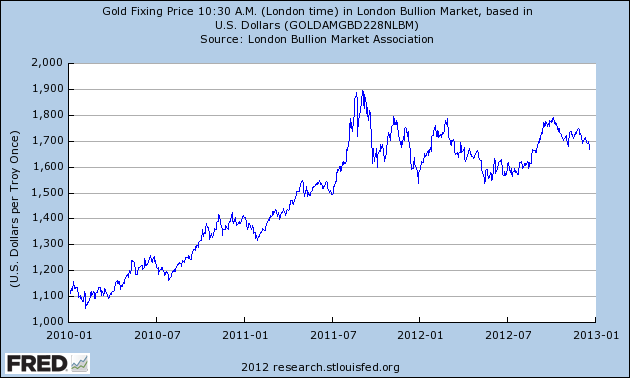