In reverence of Peter Drucker — who once observed that "nobody predicts the future — the idea is a firm grasp of the present" — no predictions here for the New Year.

I’ll just prioritize the puzzles ahead, and point out some things to watch for.

In reverence of Peter Drucker — who once observed that "nobody predicts the future — the idea is a firm grasp of the present" — no predictions here for the New Year.

I’ll just prioritize the puzzles ahead, and point out some things to watch for.

Nothing in 2013, no issue at all, compares to the need for fiscal repair. The Fed can buy our new debt for another year, but now we must make progress. And the fiscal cliff is only the first turn in a larger maze.

None of us can know another’s mind, and even firsthand reporters can misunderstand intentions. Political matters today are touchy almost beyond discussion. However, the mind of the president is central to the fiscal issue.

A high level of frustration for President Obama is now 2 years old. His priorities — stimulus spending, Obamacare and Dodd-Frank — were all in place by the end of 2010. Republicans took the House in the elections that fall. Since then, the White House has been nearly inert, without achievement, except for its part of the 2011 fiscal fiasco with Congress.

Once re-elected, feelings of mandate and confirmation were justified, although Obama ran more against Mitt Romney than for a specific program, except for raising taxes on those households earning more than $250,000. In the last two years, not even Ahab had it in for a whale as Obama has had it in for this group.

The fiscal cliff negotiations since the election are a mystery to me. Two years ago, the president’s Fiscal Commission (Bowles-Simpson) delivered recommendations he did not accept. He has still not said exactly why.

The basic issues in the fiscal cliff negotiations are a minor skirmish compared to the debt-limit fight two months ahead and the inevitable big-money — really big — battle on Bowles-Simpson ground that will consume most of Obama’s second term.

Why the total lock-up on the cliff? What for? Polling places had barely closed before Republicans conceded on new revenue, and then their leadership reconceded farther than the rank and file could stand. The concessions were met by White House demand for new revenue 3-to-1 in excess of spending cuts, while the Bowles-Simpson touchstone is 2-to-1 the other way, cuts over spending.

The only first-person accounts of negotiations inside the White House that I know of appeared in the Wall Street Journal on Saturday, Dec. 15 — in news pages, not op-ed, and based on notes taken by participants. This testimony describes Obama as tougher in private than in public, over the edge to insulting, goading House Speaker John Boehner into a walkout, which he managed to resist. But why? The president and most media have succeeded in demonizing Republicans, but to what purpose? They still hold a veto in the House.

Compromise does not mean that you get what you want. Ronald Reagan cut deals with Tip O’Neill, but the price was larger government in each of his terms. Bill Clinton spoke his own frustration: The ’93 fiscal deal meant he had to be an "Eisenhower Republican." Daddy Bush’s fiscal deal was a great thing for the country, but cost him the job. Lyndon Johnson was not the king of bludgeoning Republicans or Dixiecrats in his own party, but a magician of horse trading.

In our government, compromise must begin with the president. The Republicans are, of course, at fault in their wishes for unaffordable spending on defense, and too-low taxes, but no compromise of the magnitude necessary now has ever come forth from Congress. Gravy did not flow from your turkey; it was the work of a skilled cook.

I wish not to say what I think I see: Obama intends to break the Republicans. Break their will now, so badly that Democrats will take the House in two years. The means: Refuse resolution of the fiscal cliff and debt limit on terms Republicans can bear, and blame the Republicans for failure. And then Ahab will be free to pursue a tax-heavy defense of indefensible entitlements. I hope this conclusion is mistaken.

Sam Rayburn, master of the House, said to fellow Texan Lyndon Johnson upon his ascent to Senate Majority Leader: "Lyndon, don’t tell anybody to go to hell unless you can make ‘im go." How Obama manages to balance his frustration and righteousness with the need for compromise will tell the tale in 2013.

No conceivable tax revenue collected from the rich or anyone else can close more than a minority portion of the fiscal gap that results in the chart, below, published by researchers at the Federal Reserve Bank of St. Louis.

1. The "millions" on the Y-axis are trillions (millions multiplied by millions).

2. The balances are limited to Treasurys held by the public, not including intragovernmental sums that contribute to the $16 trillion figure often published by the media. 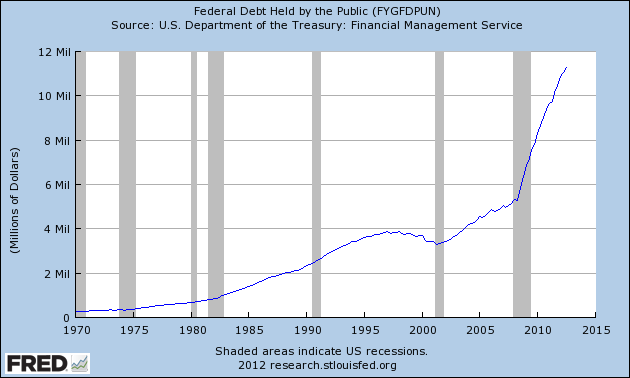