Interest rates, stocks and hopes for the economy all crested in the last week — not rolled over, just flattened, without acceleration.

Applications for purchase mortgages fell, starts of new homes crept up 0.8 percent from December, and sales of existing homes rose 9.1 percent from the year-ago, dead-low base.

Interest rates, stocks and hopes for the economy all crested in the last week — not rolled over, just flattened, without acceleration.

Applications for purchase mortgages fell, starts of new homes crept up 0.8 percent from December, and sales of existing homes rose 9.1 percent from the year-ago, dead-low base.

Europe is still rolling downhill, all of the weak economies (including France) falling out from under fiscal-austerity promises. Leadership throughout the zone sounds like a convention of Baghdad Bobs competing for phony optimism (If you missed it, Muhammad al-Sahhaf got the nickname in 2003, for his daily claims that "there are no Americans within 100 miles of Baghdad!" while on split-screen M-1As clanked by, two blocks away).

The Fed released minutes of its January meeting, which in the name of openness and clarity confused everyone.

Unlike his predecessors, Fed Chair Ben Bernanke runs the place like the Princeton Faculty Club, letting everyone have a public say. The minutes are anonymous, describing "several" with one view, "many" with another, and "a few" over there.

Each meeting includes the chairman, six presidentially appointed and congressionally confirmed governors, and 12 presidents of regional Feds (five of whom rotate as voting members — but all yap in the meetings).

These minutes revealed a long, aimless discussion of when and at what slope the Fed will conclude "quantitative easing" (QE) purchases of Treasurys and mortgage-backed securities (MBS) that have helped keep rates low.

For now, Bernanke, the appointed governors and the brightest of the regionals are firmly in control and of one mind: This economy is not ready to leave the intensive care unit.

Instead of Fed-worry, consider a puzzle (data thanks to John Mauldin and Ankur Shah). Beginning in the late 1990s, corporate profits leaped from a 50-year normal of between 5 and 6 percent of GDP, to a record of more than 10 percent.

From World War II through the 1970s, U.S. wages were equal to about 50 percent of GDP. Then, in the 1980s, wages slipped to 47 percent of GDP and, since the late 1990s, to about 44 percent. In that same span, union membership has collapsed from nearly 40 percent to about 11 percent, and more than half of the remainder are unionized government employees, the most secure jobs with the best benefits.

I can hear my friends on the Left sputtering at predation by the 1 percent. Instead, glance outside that box.

At least 60 percent of profits generated by companies in the S&P 500 are earned overseas, thus largely irrelevant to domestic wages. U.S. labor law is as friendly to unionization as ever. If corporate oppression were the case, we would be organizing in record numbers. One hundred years ago, the 1 percent were predators — Rockefeller, Carnegie, Gould and all — and the U.S. Army visited town to break strikes.

From 1990 to 2008, world trade excluding energy, just merchandise and services, exploded from $4 trillion to $19 trillion. Something more than 1 billion Asians entered the global workforce, willing to work for a small percent of any Western worker’s pay.

Modern U.S. corporations, light on their feet, flat organization charts, co-opting unions by treating labor as valued capital, have been making a fortune via turnstiles set up in the flow of trade, especially in the emerging world.

Here in the U.S., a Darwinian experience. If you’re tech-savvy, plugged in to the world economy, competent and motivated (no matter how well-educated), you will probably not have noticed anything has gone wrong. The same is true for those riding the health care gravy train (the only sector of the U.S. economy to add jobs every month of the Great Recession), or in higher-ed. Not predators, just successful, which I hope still is not a dirty word.

If, however, you faced direct competition with the global labor pool, products and services delivered, measured in, or made of electrons, you’ve been in a lot of trouble. The national what-to-do debate should focus on how to open the path to success for this half or more of our people. Clawing at the successful won’t do it.

Compassion and fairness aside, we need the tax base.

I have a ton of friends all in a lather about inflation. Hose off. 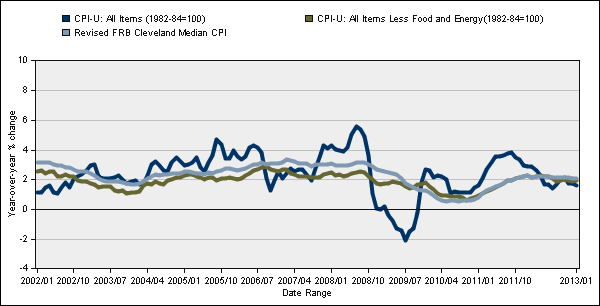