Craigslist has implemented new features in its listing sections that bring the website’s user experience closer to today’s industry standard.

The rare interface revamp includes features that may please house hunters that use the classified ads website, but some agents say they will continue to shun the website for the same reason they did before: poor quality control.

Craigslist has implemented new features in its listing sections that bring the website’s user experience closer to today’s industry standard.

The rare interface revamp includes features that may please house hunters that use the classified ads website, but some agents say they will continue to shun the website for the same reason they did before: poor quality control.

"Craigslist still has other quality control issues as their larger problem that should be addressed as a priority over redesigning the consumer interface," said Ariana Loucas, a Realtor based in Columbia, Md.

Loucas said she stopped posting her listings on Craigslist because scammers continually scraped and reposted her listings, using them to solicit money from unsuspecting users.

The site has come under criticism for failing to adequately protect consumers from such scams. That criticism may help drive traffic to rival listing websites that have better control over listings. Craigslist did not respond to repeated requests for comment on the company’s quality-control practices.

Just 13 percent of recent homebuyers use "for-sale-by-owner" websites like Craigslist, according to the 2012 NAR Profile of Home Buyers and Sellers.

Though many real estate agents commissioned by sellers use Craigslist to market their listings, NAR spokeswoman Stephanie Singer said Craigslist is often recognized as a "for-sale-by-owner" website because, compared to other listing websites, a disproportionate amount of listings on the site are advertised by owners who have opted not to hire an agent.

Craigslist has also has taken heat for its dated layout, which the website said it preserved because it was easy to use, and because users weren’t clamoring for enhancements.

But perhaps in recognition that consumer expectations have changed, Craigslist began to roll out a mapping tool last year that marks the locations of listings in certain geographical areas. The tool resembles those offered on major listing services like Trulia, Zillow and Realtor.com

After zooming in far enough with the tool, a user may click on a circle to populate an area on the map with listings. Craigslist complemented the tool with two other features that allow a user to view listings accompanied by thumbnails in either a list or grid format. Previously, the website only displayed listing result pages in text format. 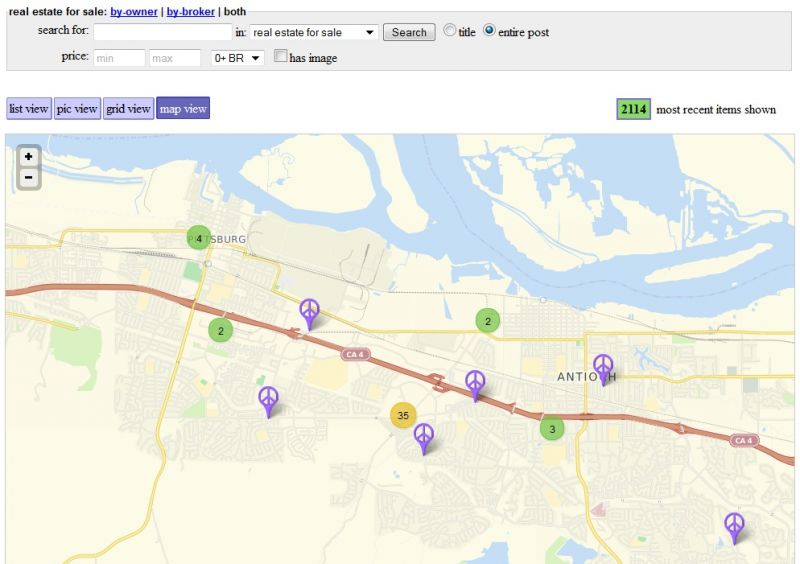 Screen shot of a Craigslist property search in map view.

The changes are likely to appeal to users by providing them with features that they have grown accustomed to on other websites. While the thumbnail-equipped listing results pages aren’t as clean as those that appear on other websites, some might find Craigslist’s mapping tool more elegant than those offered by competitors.

"I will pass on using Craigslist until the larger matter, user protection, is addressed over user experience," she said.

Singer, the NAR spokeswoman, said many in the Realtor community feel the same as Loucas.

"Craigslist has a credibility issue," Singer said. "Many of our members continue to experience problems stemming from the lack of any quality control at Craigslist that has allowed their listings to be re-posted on that site by scammers who pretend to be renting the property."

In order to address the issue, Craigslist could potentially add a function that secures an agent’s MLS ID with an IDX feed, Loucas suggested. "I’d then entertain using the website as a marketing resource again," she said.