Despite some bumps in the road, the housing upturn is "intact" and rising home prices are expected to boost household net worth and offset fiscal tightening, according to a monthly economic outlook

Despite some bumps in the road, the housing upturn is "intact" and rising home prices are expected to boost household net worth and offset fiscal tightening, according to a monthly economic outlook released today by economists at Fannie Mae.

Tight inventories continue to restrain sales of existing homes. Although the number of homes on the market grew by nearly 10 percent from January to February, the 1.94 million homes for sale represented a 19.2 percent decline from the same time a year ago. 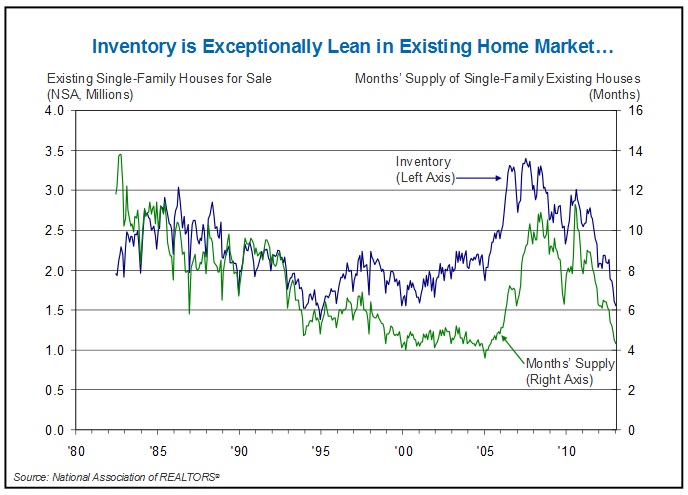 Pending sales of existing homes dipped 0.4 percent from January to February, but remained at their second-highest level in nearly three years, according to the National Association of Realtors.

New-home sales also slipped from January to February and builder confidence was down for the second month in a row in March. But housing starts reached a near five-year high in February and new-home sales climbed 12.3 percent year-over-year.

Fannie Mae economists project that existing-home sales, which were up 9.4 percent last year, wlll grow by an additional 10.5 percent this year, to 5.15 million homes, and by 6.2 percent in 2014, to nearly 5.5 million homes. Sales of new single-family homes are expected to post even stronger growth — 15.1 percent this year and 44.1 percent in 2014.

The increases will be supported by a rebound in household formation, historically high housing affordability, improving sentiment toward the housing market, and continued strong demand from investors, Fannie Mae said.

"We expect home prices to firm further amid a durable housing recovery, continuing to boost household net worth, gradually diminishing the population of underwater borrowers, and reducing incentive for strategic defaults," the Fannie Mae report said.

Potential headwinds to economic growth and housing headwinds include fallout from the ongoing European debt crisis, spending cuts by federal, state and local governments, and potential cutbacks in the Federal Reserve’s ongoing purchases of Treasurys and mortgage-backed securities, which have helped keep interest rates low.

The forecast still assumes that Congress will reach a compromise on sequestration, but warned that the failure to avert full sequestration could amount to a 0.5 percent drag on economic growth for the year.

Purchase mortgage applications fell in three out of four weeks in February and then rebounded strongly earlier this month, Fannie Mae economists said, "suggesting that the ongoing recovery in home sales could be bumpy during the first half of this year."