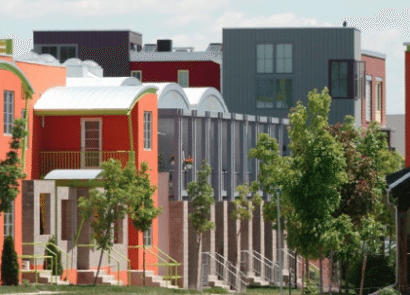 Like many U.S. cities in the past few decades, Austin has seen car-dependent suburbs pop up on its outskirts, leaving its downtown, until recently, an after-work-hours ghost town.

Like many U.S. cities in the past few decades, Austin has seen car-dependent suburbs pop up on its outskirts, leaving its downtown, until recently, an after-work-hours ghost town.

Image of sprawl in the Austin, Texas-area Hill Country via Shutterstock.

It’s one of a dozen community-redefining projects in the U.S. and Canada from Portland, Ore., to Atlanta, profiled in a 229-page book published this year by urban planning publishing house Planetizen Press.

The highlighted projects, both downtown and suburban, have a strong sense of place — pedestrian-friendly layout, architecture that reflects the landscape, thriving multiuse commercial elements and native landscaping, said Simmons Buntin, the book’s co-author and editor of Terrain.org, a quarterly online journal highlighting the intersection between built and natural environments.

Each development case study explores how developers and city officials worked together to create integrated, revitalized communities — in short, “a wonderful place to be,” Buntin said.

The Austin project, for example, brought retail, upscale restaurants, residential housing and office space to an area that until recently was devoid of that diversity.

Other projects highlighted in the book include:

The takeaway from these case studies is that successful projects require collaboration among developers, local governments and policymakers and can take a long time to effect, Buntin said.

“It takes decades and in some cases hundreds of years,” Buntin said.

But the result, he said, can be a redefined sense of living in a particular place and a diverse, thriving, vibrant community.

Austin Realtors sign up for Matrix
Back to top
Keep up-to-date on tools and tactics to impress your clients and outshine your competition with the 2022 virtual bundle.Register Now×
Agent Appreciation Sale: Inman Select for only $85.CLAIM OFFER×
Inmanpot
Log in
If you created your account with Google or Facebook
Don't have an account?
Create an Account
Forgot your password?
No Problem