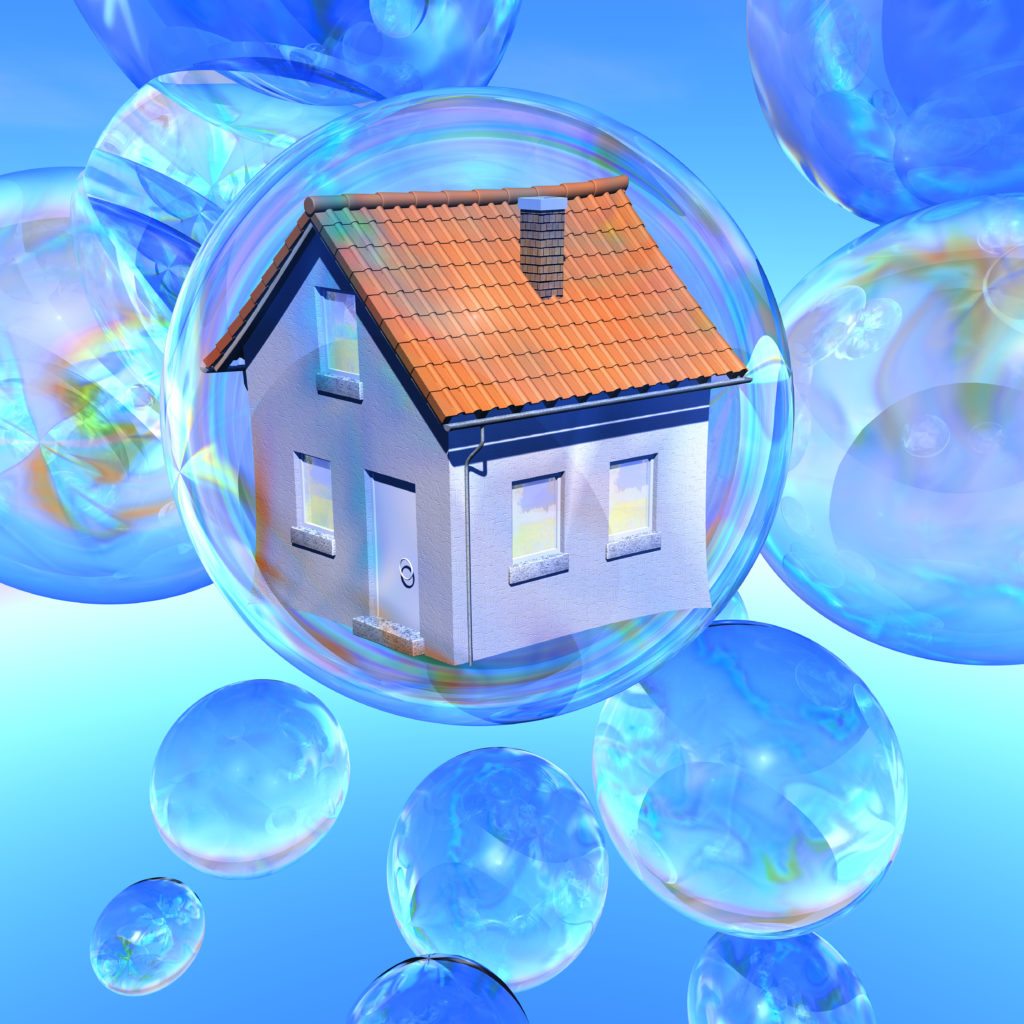 ATLANTA — Although home prices are likely to continue to rise in the next few years, the national market is not in danger of a bubble, according to prominent economists.

“Right now we are not in bubble trouble, even though prices are rising as fast as we saw in last decade’s bubble,” Kolko said. Prices are still 7 percent undervalued relative to incomes and rents, he said.

By contrast, home prices were 39 percent overvalued during the housing boom with some areas overvalued by up to 80 percent, he added.

Kolko said there is no sign of overbuilding and little sign of overborrowing. “Prices would have to keep rising at the current rate for several more years to put us back in bubble territory,” he said.

He anticipates three factors will stem price appreciation before that happens: higher mortgage rates, fading investor interest and more for-sale inventory. Higher mortgage rates will likely dampen, but not kill, housing demand — even an increase to a 5.5 percent interest rate is still historically low, and buying would still be 33 percent cheaper than renting at that rate, he said.

Indeed, interest rates would have to rise to more than 11 percent for renting to be cheaper than buying, he said.

“Of course, it’s different for different markets,” Kolko added, and his calculations assume borrowers will stay in their homes for seven years, among other assumptions.

Low inventory has contributed to skyrocketing price appreciation, making it a necessary part of the recovery, Kolko said. But inventory will begin to rise as would-be sellers get off the fence and put their homes on the market, he said.

Rising prices have brought many homeowners from underwater, making them eligible to sell again, but negative equity is not the only factor at play in their decision.

“Prices have been rising for 15 months,” but inventory has not risen in that time, Kolko said. The reason behind that hesitance has to do with homeowner attitudes: “No one wants to sell at the bottom. Why would you sell if you could wait six months or a year?”

“People have reservation prices. They are not going to bring the house on market until it gets there,” he said.

Fleming noted that the biggest problem plaguing the housing market is lack of equity. Given rapidly rising home prices, he expects the number of homeowners with negative equity will be back down to a historical norm of less than 1 percent in five to seven years.

All three economists said the housing recovery was on track. Yun said there was no danger of the economy slipping back into recession.

“Home price growth is rising very, very fast. Housing wealth is easily offsetting the impact of sequestration,” he said, referring to tax hikes made earlier this year at the federal level. Yun projects home prices for existing homes will rise 8 percent this year, followed by 5 percent next year.

He warned, however, that if price growth continues to easily outpace income growth, it will affect home affordability and run the risk of “creating haves and have-nots. The owners are smiling (and) the non-owners are frustrated that they cannot participate in” the market, he said.

Yun noted the national homeownership rate currently stands at 65 percent, down from a peak of 69 percent.

“I think it’s going to go to 63 percent possibly, before stabilizing,” he said, though he cautioned that that doesn’t mean the housing market will decline. Younger generations will pull down the average, he said.

“Home sales are essentially coming back to the (homebuyer) tax credit-induced sales (of 2010) even without the tax credit because of the better economy,” Yun said. But sales are still only at 71 percent of the past peak, he added. 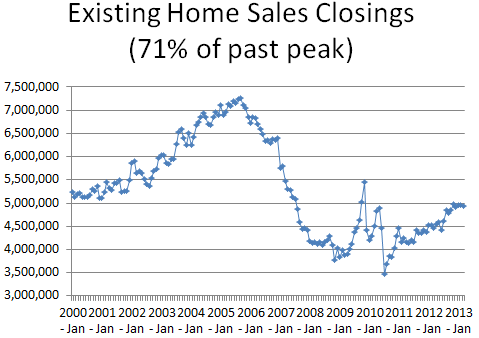 Yun expects vacation-home sales in particular to make a “meaningful” increase this year and next, due to rising household net worth among upper-income households resulting from near-peak stock values.

New-home sales are only at 28 percent of their past peak — not because buyers don’t want them, but because builders aren’t building enough new homes, he said. 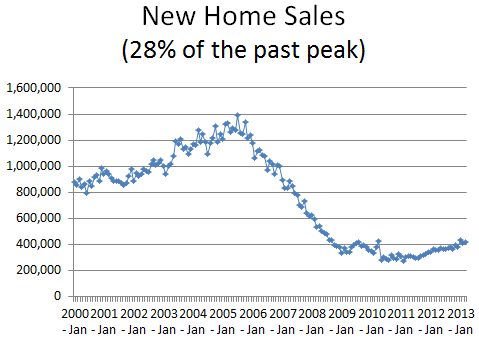 Newly constructed homes inventory is at a 50-year low and, while recovering, housing starts need to rise by 50 percent to get to their long-term average of 1.5 million per year, Yun said.

“I don’t expect that to happen,” he said, noting that historically most homes have been built by smaller companies.

But “small builders are shut out of the market. They cannot get construction loans,” Yun said.

All three economists agreed construction loans to small businesses are down and harder to get. The result will be long-term housing shortages, Yun said.

“We are frustrated the banks are not lending” when they have plenty of cash to lend, he said.

Between 2009 and 2012, the average credit score for borrowers of approved Fannie Mae- and Freddie Mac-backed home loans ranged from 760 to 770, he said, noting that a “normal” average would be 720. If standards were normal, home sales would be 15 to 20 percent higher, he said.

Fleming questioned the notion that credit standards are too tight for homebuyers, however.

“Averages are easily manipulated. It’s not about the average score. It’s about the tail: Are we giving credit to people with” low credit scores? he said.

An analysis of the spread of credit scores for those obtaining loans, rather than the average score, suggests the answer to that question is yes, Fleming said.

Compared to the late 1990s, when there was a “relatively healthy” level of credit availability, credit might be “modestly constrained,” but not too far off historical norms, he said.

Denied loan applications may have an average FICO credit score of 720, he said, but they also have a loan-to-value ratio of 88 percent.

“What are they being denied for? Lack of equity,” he said.

Fleming said he did not know if there were better measures of credit availability, other than credit score averages, currently published. He noted, however, that the number of mortgage applications actually underwritten might be one measure. The share of mortgage applications underwritten stands at 15 percent, down from around 30 percent, he said.

Still, credit isn’t tight, “we’re just making it really painful and difficult” to get a mortgage, he said, suggesting the paperwork involved was likely daunting for many borrowers.

Nonetheless, he anticipates that as interest rates rise and refinancings become a smaller share of mortgage originations, the competition for purchase loans may result in what he called “expansion of the credit box.”

As the pressure to offer more exotic loans than currently available rises, “the question will be: Have we learned our lesson in the industry?” he said.

Do you think we’re in a housing bubble? What are you seeing in your market? 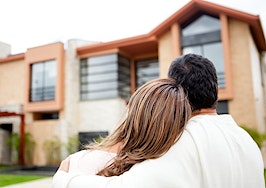 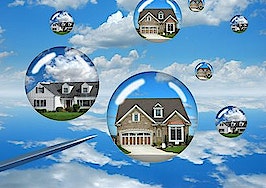 Are we in a housing bubble? Not even close, Trulia says

Economists see growing threat of new housing bubble
Back to top
Only 3 days left to register for Inman Connect Las Vegas before prices go up! Don't miss the premier event for real estate pros.Register Now ×
Limited Time Offer: Get 1 year of Inman Select for $199SUBSCRIBE×
Inmanpot
Log in
If you created your account with Google or Facebook
Don't have an account?
Create an Account
Forgot your password?
No Problem