Purportedly marking a step forward for data aggregation in the public interest, New York rental listing site Apartable has launched a feature that offers records-based profiles of apartment buildings across the city, pulling the curtain back on landlords’ management performances.

“You want to buy a used car, you’re not just going to give the guy $10,000 in cash without having it checked out first,” said Apartable founder Avishai Weiss. “You are going to bring it to a mechanic and make sure it’s in condition.”

Apartable, he said, will play the mechanic’s role for renters, and further deliver on the site’s frankly-conveyed value proposition: “Real Apartments. No Bullshit.”

The feature is partly inspired by the site NYC’s Worst Landlords watch list, which maintains a list of the landlords with the most housing infractions and allows you to see the number of violations associated with many NYC buildings.

But Weiss said Apartable takes that site’s idea a step further by displaying not just the total number of complaints tied to some buildings and landlords but every single infraction and complaint associated with many, many buildings (nearly 300,000, he said) and landlords.

“This is literally Carfax for apartments,” he said, referring to the vehicle-history site. 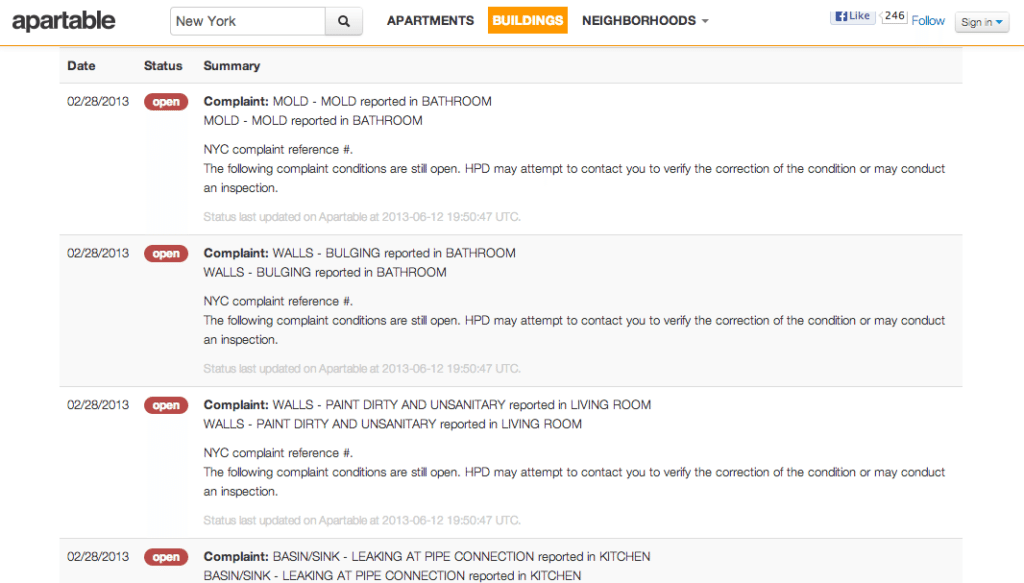 “What this does is it opens up all that information in a really understandable way,” Weiss said. “You pick an address and then I show you when the building was built, how many floors, who manages it, what violations in the past, bedbugs, etc.”

Users may see the biggest local landlords on neighborhood pages and click on them to see a results page of all their buildings, or they may search for individual addresses.

The “details” button next to each result pulled up by clicking on a landlord name or searching an address brings users to profile pages that include a link to an “issues” page that lists all complaints and violations associated with a building along with names associated with that building’s management.

Would you be comfortable with having a landlord’s management history posted on your listing?