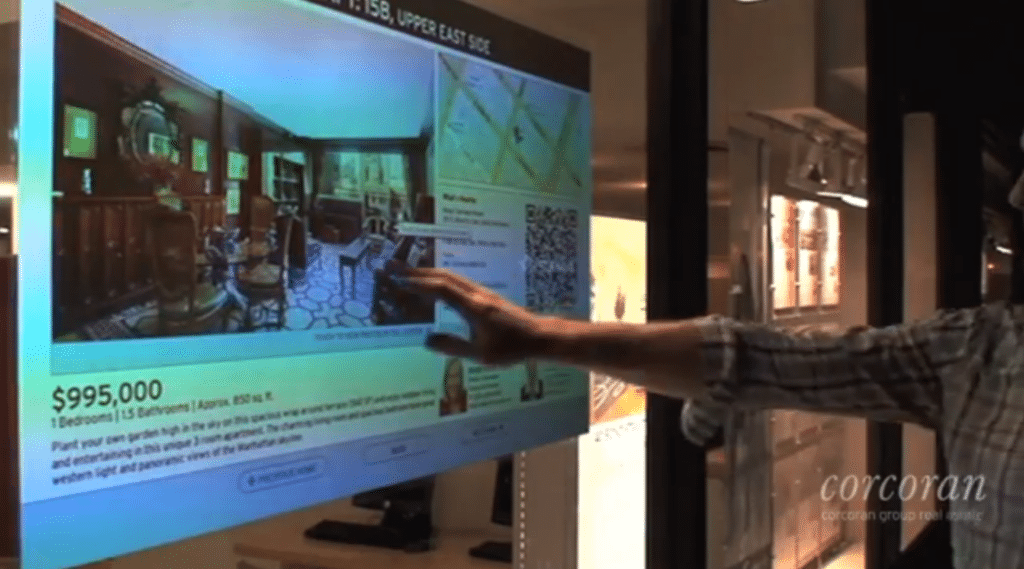 The phones and tablets that are near us for nearly every breath of the day are responsive to our touch and the baby in our minds. Nowadays, actual babies see an image on a printed page and think that, like an iPad, it should be interactive.

New York City-based brokerage The Corcoran Group is feeding the new mind. The firm, a member of Realogy’s giant brokerage wing, NRT LLC, turned sections of five of its storefronts in the Big Apple into tablet-like, interactive displays in late 2011.

Video from The Corcoran Group introducing its touch-screen window display.

“We wanted to put something in the window that resembled how brand positioning works,” said Matthew Shadbolt, The Corcoran Group’s director of interactive product and marketing.

Users can walk up to the windows anytime day or night and use their hands and fingers to navigate the content displayed on them, a projection from inside the office of what is essentially a website onto a plastic film stuck on the inside of the glass.

The firm, which has 26 offices in New York City, The Hamptons on Long Island, and South Florida, has plans to add the technology to other offices with the right layout, Shadbolt said. An office must have large, street-level windows to optimize the touch-screen windows’ interactive potential.

The displays allow the brokerage to showcase more properties in the touch-screen-equipped windows, and “show curated things to do around a listing,” Shadbolt said. The technology also saves on printing costs and allows the firm to intersperse brand messaging like new ad campaigns and other content around listings, he said.

For example, when the firm launched a TV spot associated with its “Live Who You Are” marketing campaign last year, it pushed the spot to all of the interactive window displays.

The firm pushes out updated content, info about open houses and corporate messaging to the displays in real time from its social media accounts like Foursquare, Shadbolt said.

But the majority of the content on each office’s display is chosen by the office itself. The offices select what listings and other info they want in the display, and headquarters produces the browser-based feed that’s displayed on the window.

So far, Shadbolt said, The Corcoran Group is seeing the windows used mostly at night, from about 7 p.m. to 11 p.m., when the brilliant window display set off against the dark attracts users like moths to light.

The Corcoran Group partnered with New York City-based tech firm OpenEye Displays LLC to make the touch-screen windows. There are two films on the inside of the glass, said Bryan Meszaros, founder and managing partner of OpenEye Displays.

One of the films on the glass, a vinyl-like material, catches light from a high-quality projector positioned 7 to 10 feet behind the window inside the office. The other film, between the vinyl layer and the glass, has sensors that detect disruptions in light waves, registering touch through the glass.

For the technology to work, an office must have a layout large enough to provide a clear path for an image to be projected, Meszaros said. The glass has to be thin enough for the sensors to pick up activity on the other side. Cost is also a factor — a projector alone can cost $7,000.

So far, The Corcoran Group is the only firm, brokerage or otherwise, that OpenEye Displays has implemented this technology with, Meszaros said.

Another New York-based firm, Halstead Property, signed up earlier this year with technology firm imageSurge, one of the companies coming to Start Up Alley at Real Estate Connect San Francisco July 10-12, to develop similar interactive storefronts.