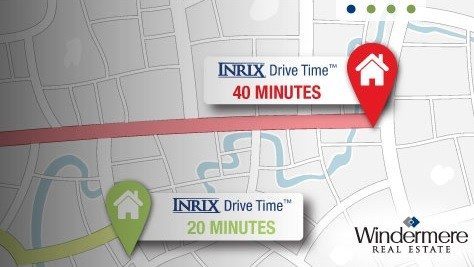 “You can expect in the next month Windermere will have an announcement,” said Kevin Foreman, general manager of geoanalytics at INRIX.

Foreman spoke on a panel about leveraging “big data” to drive business. When pressed by panel facilitator and Inman News Publisher Brad Inman to elaborate, Foreman said “one might speculate” that potential homebuyers would be able to search for a particular type of home within, say, 35 minutes of their workplace.

INRIX will likely go public later this year and could raise up to $100 million, according to news outlets.

In March, INRIX announced it had partnered with Seattle-based Windermere to release INRIX Drive Time on Windermere.com, a feature that allows consumers to enter their work address on listing detail pages and receive commute times based on real-time traffic data.

INRIX partners with vendors to source most of its traffic data from commercial vehicles, Foreman said. The company’s sources also include government road sensors, official accident and incident reports, and real-time traffic speeds crowdsourced from about 100 million vehicles and devices.

In the past 30 days, more than 35,000 users have used INRIX on Windermere.com, Foreman said.

On Wednesday, real estate marketing software firm Imprev announced it had teamed up with INRIX to offer a Drive Time-branded agent app that provides homebuyers with insight into commute times from their workplaces to homes they see listed for sale.