Real estate giant Realogy posted a profit in the second quarter of 2013, as a recovering housing market boosted business for its brokerage operations and the company enjoyed the benefit of a reduced debt burden, the company reported.

Realogy said its net income was $84 million in the second quarter, marking a substantial improvement from the same quarter a year ago, when it swallowed a net loss of $25 million, and the first quarter of 2013, when losses totaled $75 million.

The profit rode on the back of $1.53 billion in revenue, up 17 percent from last year, and Realogy said it expected to experience similar annual growth in the third quarter of 2013.

“The material improvement in our second-quarter financial results is largely attributable to the strength of our business model, the strong performance of management, a dramatically improved balance sheet with a corresponding material reduction in interest expense, and a housing market recovery that is showing resiliency,” said Richard A. Smith, Realogy’s chairman, chief executive officer and president, in a statement.

In its brokerage operations, Realogy Franchise Group (RFG), the company’s franchise segment, reported that transaction sides were up 10 percent from a year before, while NRT, operator of Realogy’s company-owned brokerage offices, reported a 12 percent gain in transaction sides. A transaction side is tallied each time an agent represents a buyer or seller in a home sale.

“Recently, there has been renewed focus on rising mortgage rates and what impact they will have on the housing market,” Smith said. “While rising rates have had an effect on refinancing volume, thus far we have seen no near-term impact on existing-home sales. We view rising rates as a reflection of a healthier economy, and while mortgage rates may put near-term pressure on certain homebuyers, this needs to be viewed in the broader context of overall affordability, which remains at historically high levels. We believe the recovery is, and will continue to be, a long-term process.” 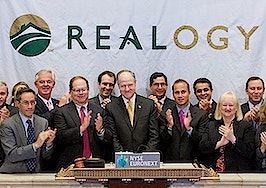 Majority of Realogy's board now independent

Apollo's Realogy bet pays off at nearly 2-to-1
Back to top
Only 3 days left to register for Inman Connect Las Vegas before prices go up! Don't miss the premier event for real estate pros.Register Now ×
Limited Time Offer: Get 1 year of Inman Select for $199SUBSCRIBE×
Inmanpot
Log in
If you created your account with Google or Facebook
Don't have an account?
Create an Account
Forgot your password?
No Problem