Although the risk of mortgage fraud is declining, an increase in mortgage applications due to the rebounding housing market means more dollars are at stake for lenders, according to a quarterly report from real estate information and technology firm CoreLogic.

Fraud risk among U.S. mortgage applications fell 5.6 percent year over year in the second quarter, the fifth straight quarter of annual decreases, the report said. CoreLogic estimated 19,700 applications had a high fraud risk last quarter, or 0.8 percent of the 2.4 million applications submitted. That’s down from 20,900 high-risk applications in second-quarter 2012.

Residential mortgage applications with fraudulent information totaled an estimated $5.3 billion nationally in the second quarter, down from $5.5 billion in second-quarter 2012, but up slightly from $5.2 billion in first-quarter 2013, the report said.

CoreLogic’s Mortgage Application Fraud Risk Index peaked in the first quarter of 2012 and has fallen 6.8 percent since then, the company said.

“Since the beginning of 2012, mortgage application fraud risk has totaled more than $30 billion nationally,” said Mark Fleming, chief economist for CoreLogic, in a statement.

“While the propensity toward application fraud risk has declined based on our index, as the housing market recovers, the volume of mortgage applications is rising and increasing the total amount of fraudulent mortgage loan application dollars.”

CoreLogic says the index represents the collective level of fraud risk the mortgage industry is experiencing in each time period, as well as the share of loan applications with a high risk of fraud. The index is standardized to a baseline of 100 for the share of high-risk loan applications nationally in the third quarter of 2010.

Mortgage application volumes are determined using the latest numbers reported by lenders under the Home Mortgage Disclosure Act. That data is used with CoreLogic proprietary data from loan servicers to estimate the number of applications per origination by quarter and geography.

CoreLogic’s Mortgage Fraud Consortium — a group of lenders formed in 2008 to pool loan data that can be analyzed by CoreLogic’s fraud detection tools — provides an observed rate of fraudulent loan applications among members.

Of six different components of the index, the intentional misrepresentation of income saw the highest year-over-year increase last quarter, 13.3 percent,the report said. Property fraud risk, which CoreLogic defined as the deliberate over- or undervaluing of a home to achieve illegitimate gains, experienced the greatest drop, 20.8 percent, in the second quarter compared to a year ago.

“As the housing market and economy have healed over the last 18 months, a transition away from property-related to identity-related application fraud has occurred,” Fleming said.

“Rising prices and a healing housing market make property-related mortgage application fraud less likely, but a higher level of scrutiny on an applicant’s ability to pay increases the propensity to attempt income-related fraud.” 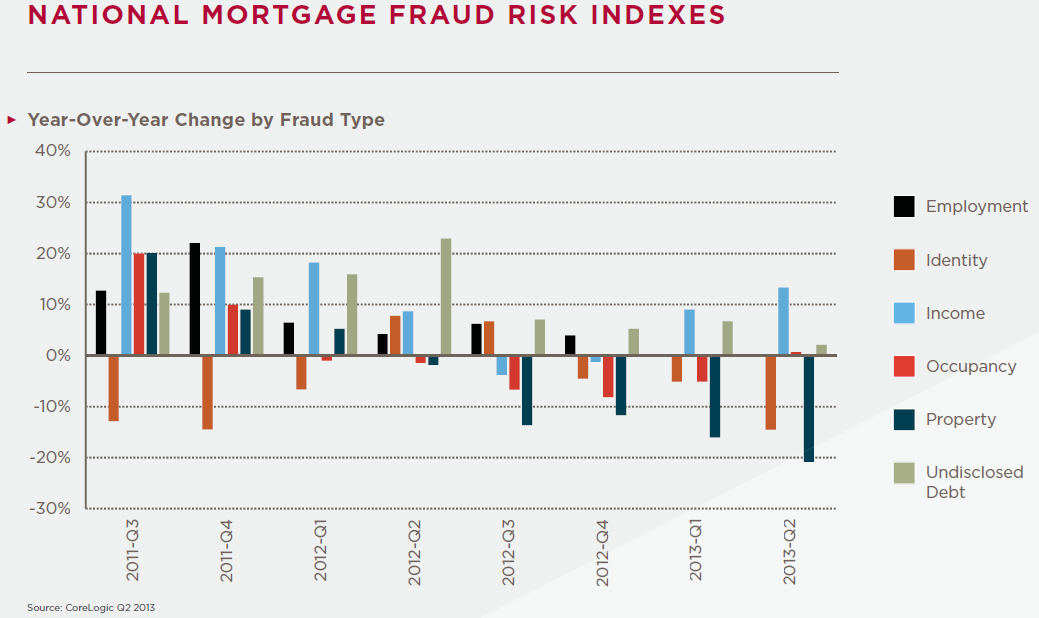 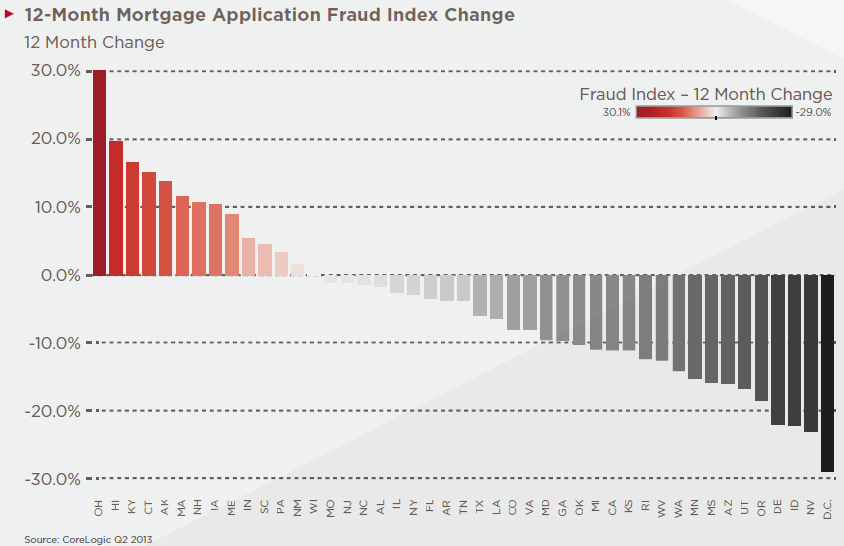 Editor’s note: This story originally included a table ranking the top metro areas by number of fraudulent mortgage applications per 1,000, and dollar estimates for the amount of fraudulent applications received by lenders in each metro area during the second quarter. The table has been deleted because the information originally provided by CoreLogic was incorrect.

Tucson real estate agents headed to prison for mortgage fraud
Back to top
Only 3 days left to register for Inman Connect Las Vegas before prices go up! Don't miss the premier event for real estate pros.Register Now ×
Limited Time Offer: Get 1 year of Inman Select for $199SUBSCRIBE×
Inmanpot
Log in
If you created your account with Google or Facebook
Don't have an account?
Create an Account
Forgot your password?
No Problem