Century 21 Real Estate LLC has launched a new global website that delivers information about listings represented by agents affiliated with the brand around the world in 16 languages.

Century21global.com allows consumers to search for Century 21 agents and offices around the world, and converts the prices of more than 500,000 listings from 24 countries currently featured on the site into 36 currencies. Measurements are provided in standard or metric units, and “ping,” a measuring unit used in Asia.

The brand’s new global site was created with a joint investment from Century 21 international master franchise owners, and will help the franchise leverage its significant global presence, said Rick Davidson, president and CEO of Century 21.

Century 21 has nearly twice as many offices outside the U.S. as inside, Davidson said, and last year 48 percent of the 760,000 transactions the brand’s agents facilitated occurred outside of the country’s borders. All told, Century 21 claims more than 102,000 agents are affiliated with the brand, working out of 7,100 offices worldwide.

“The site is yet another way for the brand to flex its international muscle,” Davidson said.

Not all 74 master franchise regions are contributing listings to the site, but Davidson expects more will come on board as it becomes established.

The time was ripe for Century 21 to launch a global site, because the interconnecting effect of technology has made the economy truly global, he said.

Davidson believes that international buyers will become more important to U.S. real estate as inventory comes back on the market and the housing recovery settles in. The site, he said, will help Century 21’s global affiliates connect with that growing international business.

Century 21’s new site differs from other international sites in that it integrates global searches into one site, instead of directing searches to regional sites, said Mike Callaghan, vice president of digital marketing at Century 21.

“We viewed the site as a way to interact with all of the listings we have,” Callaghan said.

Century 21 rival Re/Max LLC launched a global search site in 2011 that currently features listings from nearly all of the 85 countries it has a presence in, translating information into 36 languages and more than 20 currencies. Property descriptions on the site can be translated using Google Translate.

Century 21’s Realogy-owned cousin Coldwell Banker Real Estate also has a global site, which doesn’t offer language translation but directs users to search for listings on websites maintained by owners of its master franchise regions in 50 countries around the world.

On Century 21’s global site, users can select languages from a drop-down menu at the top of the page, and choose currencies from a clickable menu that opens near the listing’s price.

Some listings on the site don’t provide property descriptions, and there appear to be some glitches in converting information. One three-bedroom, two-bath home in Newmanstown, Pa., is listed on the site for $179 million. 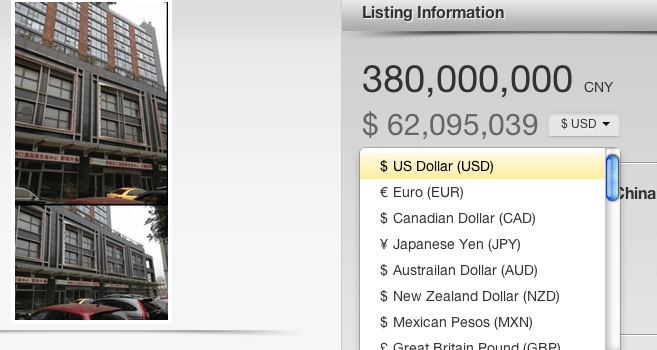 The site displays the number of listings Century 21 has in each location, for each type of property, and for those of certain sizes and layouts.

“We think the site is a show piece,” Choynowski said. It’s the first time, she said, that an international listing platform has picked up data feeds in an original language and then translated it to all other supported languages.

In 2011, realtor.com launched an international version of its site that serves up information on listings from 36 countries, translating infromation into 11 languages, 20 currencies, and metric or standard units.

A number of firms have tried to develop international multiple listing services, including Proxio Inc., which features 3.2 million listings from more than 140 countries that it translates into 19 languages and 30 currencies.

Immobel, which built and hosts Century 21’s new site, itself has millions of property listings in its database on public site real-buzz.com, including all of those from France’s two real estate associations, many from Mexico, from 100 Realtor associations in the U.S. and all of Sotheby’s International Real Estate.

The largest MLS in the U.S., California Regional Multiple Listing Service Inc., signed up this month to send all of its listings to Proxio.

U.S. franchisor Keller Williams Realty Inc., which expanded beyond North America last year with an entrance into Vietnam, has a five-year agreement to provide listings to Proxio’s “international MLS.”

International Multiple Listing Service, a global referral site that featured 200,000 listings when it announced its entry into the U.S. market in February, bills itself as a “commission share platform.”

Editor’s note: This story has been updated to note that Immobel built and hosts Century 21’s new global site and to include comments from Janet Choynowski, founder and CEO of Immobel, and Mike Callaghan, Century 21’s vice president of digital marketing.

Realtor.com goes global
Back to top
Only 3 days left to register for Inman Connect Las Vegas before prices go up! Don't miss the premier event for real estate pros.Register Now ×
Limited Time Offer: Get 1 year of Inman Select for $199SUBSCRIBE×
Inmanpot
Log in
If you created your account with Google or Facebook
Don't have an account?
Create an Account
Forgot your password?
No Problem