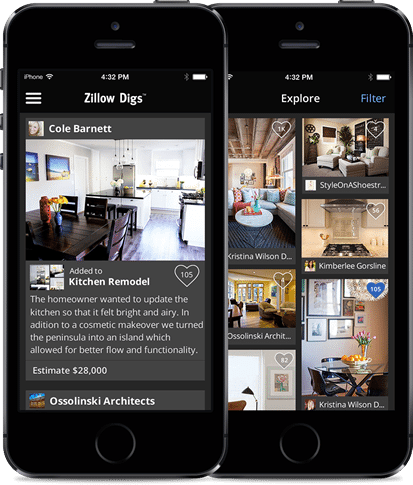 Digs, which launched in February on the Web and with an iPad app, is designed to give homeowners remodeling ideas and an understanding for how much specific projects cost.

Remodeling professionals like architects, contractors and designers can sign up at Zillow for a free profile that will facilitate their interaction with home shoppers and homeowners on Zillow Digs.

“Zillow Digs App on iPhone and iPod touch makes it not only easy to be inspired wherever, whenever, but also simple for our users to capture, share and engage on designs they love,” said Amy Bohutinsky, Zillow chief marketing officer, in a statement.

The new app release, which includes an update to the iPad app, is optimized for iOS 7 with full-frame photos and added visual depth.

On Wednesday, Digs began matching paint colors in photos on the site with those from paint maker Sherwin-Williams.

So far, Zillow says, users have “dug” more than 1 million photos on the platform and created more than 160,000 boards of ideas and decor they love, and contributed more than 85,000 photos. 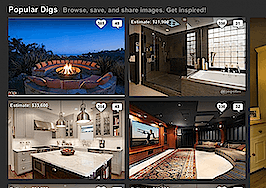 Move CEO: Realtor.com to add home improvement features
Back to top
Only 3 days left to register for Inman Connect Las Vegas before prices go up! Don't miss the premier event for real estate pros.Register Now ×
Limited Time Offer: Get 1 year of Inman Select for $199SUBSCRIBE×
Inmanpot
Log in
If you created your account with Google or Facebook
Don't have an account?
Create an Account
Forgot your password?
No Problem