Porch, a 3-month-old startup that’s taking the home remodeling industry by storm, has announced a strategic partnership with Lowe’s that will equip the employees at some of the home improvement store’s locations with tools that will allow them to use the Porch network to connect customers with local professionals.

As part of the partnership, Lowe’s employees in 139 stores in North and South Carolina and the Seattle area will quickly be able to use in-store kiosks or a special mobile app to pull up local professionals on Porch who provide services that Lowe’s doesn’t offer through its installation program, and then refer those professionals to customers, Porch said in a statement. Professionals who offer such services include handymen, painters and landscapers, according to the statement.

“By partnering with Porch, Lowe’s can help our customers achieve their home improvement dreams by providing them with the confidence of knowing who their neighbors have used successfully, and benefit our professional customers by providing them greater opportunities to grow their businesses,” said Jay Rebello, vice president of new business development and corporate innovation at Lowe’s.

Porch, which is one of Real Estate Connect’s “New Kids on the Block” and raised $6.5 million in seed funding in October 2012, claims to provide data on 90 million home projects and 1.5 million professionals. The startup has obtained that data mostly through an array of private partnerships that it cultivated for a year before officially launching three months ago, according to CEO Matt Ehrlichman.

The site lets homeowners hone in on professionals who specialize in their neighborhoods, and view those professionals’ project histories. Users may also view on a map information on nearby projects, including project type and cost.

The site is free for homeowners and professionals. But professionals may pay a monthly fee of $35 to add more information to their profiles and have their projects featured on the site.

Ehrlichman says Porch stands out from competitors because it wraps information on both projects and professionals into one experience. Typically, he said other remodeling sites tend to focus on one or the other.

The startup is using its large pot of seed funding to expand rapidly, quadrupling the number of employees to 80 since officially launching just three months ago, he said.

Ehrlichman said his previous success in the startup world has helped him secure Porch’s considerable out-of-the-gate backing. The entrepreneur said he sold one company he founded, Thriva, for $60 million. 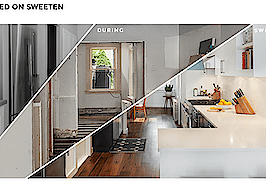 Sweeten, home remodeling matchmaker, signs 1-year deal with The Corcoran Group
Back to top
Only 3 days left to register for Inman Connect Las Vegas before prices go up! Don't miss the premier event for real estate pros.Register Now ×
Limited Time Offer: Get 1 year of Inman Select for $199SUBSCRIBE×
Inmanpot
Log in
If you created your account with Google or Facebook
Don't have an account?
Create an Account
Forgot your password?
No Problem