Russ Bergeron, president and CEO of one of the largest multiple listing services in the nation, is fed up, and he wants the world to know it.

There seems to be a “constant barrage” of MLSs announcing they will “take control” of listing syndication by restricting the distribution of listing content in some way and making decisions on behalf of their brokers, he says — even if those decisions aren’t kosher with the brokers themselves.

These are not insights that he’s sharing privately with industry insiders — Bergeron made his views known in a press release issued this week.

The press release referred to recent moves by some of his MLS colleagues across the country. The Austin Board of Realtors and the Wilmington Regional Association of Realtors, both of which own and operate their own MLSs, have both said they will stop sending listings to third-party portals on their members’ behalf through listing syndicator ListHub in the spring.

Last fall, North Alabama MLS cut its feed to ListHub and pioneered a listing distribution platform in order to syndicate directly to Zillow, Trulia and Homes.com, and negotiate separate agreements with each.

And last month, the Combined Los Angeles/Westside MLS (CLAW) became the first MLS in the country to delay its syndication feeds through ListHub by 48 hours.

“Do people seriously think that delaying data feeds or forcing brokers to distribute listings on their own, or telling brokers on which sites they can and cannot display their listings, are the answers?” Bergeron said.

In the release, MRED somewhat mockingly announced “that it is officially making no changes whatsoever to its policy regarding the distribution of brokers’ listings to websites,” which is that real estate brokerages themselves decide where and when their listings are distributed.

MRED noted that there are two schools of thought on listing syndication: “(1) to maximize exposure of listings by displaying to the most eyeballs possible with the hope of generating leads, prospects, customers and sales; or (2) define a smaller target market that matches your company philosophy or the type of market in which you work.”

According to MRED, it has never sent listings anywhere without direction from the brokerage that owns them.

“Why would an MLS or real estate association tell brokers how to run their businesses? MRED does it the way we think everyone should be doing it,” Bergeron said.

“Our job is to facilitate the buying and selling of real estate. If we can assist brokers in their marketing efforts, we are happy to do so, but only at their request.”

MRED brokers who want to send listings to third-party sites have a variety of options for how to do so. Some brokers send direct feeds to portals themselves, and others tell MRED to send direct feeds to certain websites, such as Trulia and Realtors Property Resource (RPR), on their behalf, Bergeron told Inman News. MRED also sends data to ListHub, and brokers direct listing distribution from there, he added.

In statements, two large broker members of MRED praised the MLS’ approach to listing syndication: Coldwell Banker Residential and Baird & Warner. The latter is a member of The Realty Alliance, a network made up of about 60 large real estate brokerages nationwide. The network made waves in the industry recently when it issued an ominous-sounding warning to MLSs and Realtor associations concerning members’ grievances with a long list of MLS practices.

“Brokers are held accountable for their required stewardship of that data on behalf of the consumers they serve, so we are pleased with MRED’s policy that leaves content distribution a decision consumers make with their listing broker.”

Unlike many MLSs wholly owned by Realtor associations, MRED has a hybrid ownership structure made up of seven Realtor associations and 72 broker-shareholders, or “Preferred Unit Owners.” Broker-shareholders elect 13 of the 15 members of MRED’s board of managers; four must come from the largest firms, five from medium-sized firms, and four from the remaining, smaller firms.

The other two managers come from association shareholders, one small and one large.

Bergeron said MRED’s policy has nothing to do with its ownership structure.

“It should be the default policy for all MLSs,” he said. 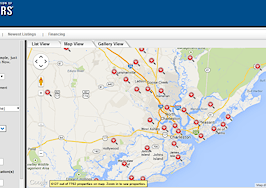 Charleston Trident MLS switches to FBS' flexmls, will eliminate public-facing site
Back to top
Only 3 days left to register for Inman Connect Las Vegas before prices go up! Don't miss the premier event for real estate pros.Register Now ×
Limited Time Offer: Get 1 year of Inman Select for $199SUBSCRIBE×
Inmanpot
Log in
If you created your account with Google or Facebook
Don't have an account?
Create an Account
Forgot your password?
No Problem