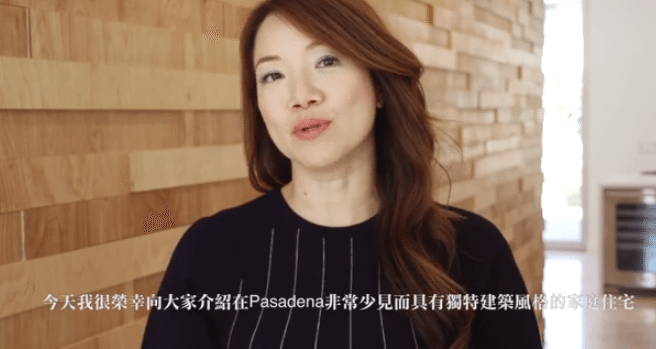 Jennifer Chan is well-equipped to cater to the high-rolling Chinese buyers who account for a sizable share of purchases in Pasadena, California.

The Chinese-American real estate agent at Beverly Hills, California-based Partners Trust has been closing multimillion-dollar deals with Chinese clients for years and is fluent in both Mandarin and Cantonese.

As if that didn’t give her enough firepower for courting Chinese buyers, Chan recently helped produce what she believes is a first of its kind: a Mandarin-language “listing documentary.”

The video profiles one of the few modern homes that Pasadena has approved, according to Audie Chamberlain, vice president of marketing at Partners Trust. He said the property’s exquisite design has made it a “local landmark.”

Chamberlain, who oversaw production of the video, calls it a “documentary” because he says it plumbs the passion that shaped the home, which is listed for $2.75 million.

The video features snippets of interviews with the property’s architects, who also happen to be its owners. They answer questions about their vision for the home, its special attributes and how locals have received it, according to Chamberlain.

The original plan was to produce a short in English. But Chamberlain soon realized that the brokerage could also turn around a Mandarin version without having to do too much extra work.

That’s because homeowners Henry Hua and Meghan Wang, who are married and co-founded Beyond Elements Architects, are both from Taiwan.

The Mandarin version of the video adds subtitles to Chan’s introduction of the property, and then runs answers from Hua in Mandarin over similar images and footage that appear in the English version (Wang chose to speak English in both versions of the video).

Pamela Liebman: Chinese outspending Russians 'in every segment of the NYC market'