Editor’s note: This is the second in a series of stories examining how real estate professionals are using customer relationship management (CRM) applications to work more efficiently and grow their businesses. See Part 1 and Part 3.

More agents than ever are seeing bigger returns on the investments they make in their contact databases, thanks to an evolution in customer relationship management software that not only helps agents easily route and track leads, spotlight promising prospects and receive instant notifications, but which integrates with other apps to automate tasks and build customized action plans for marketing.

Tech firms offering CRMs that have these elements include industry heavyweights like Trulia, Move and ZipRealty. A number of smaller, up-and-coming companies like Follow Up Boss, Contactually, Nimble and Kunversion are also pushing the CRM envelope.

Before finding this new breed of CRM, Mike Hogan, who leads a team of four agents with Re/Max Commonwealth in Mechanicsville, Virginia, tried Re/Max’s proprietary platform. But he found it couldn’t accommodate multiple lead sources and he couldn’t route leads to his team efficiently, he said. He also attempted to craft a CRM from email systems like Microsoft Outlook and Gmail, but says he just ended up wasting time and money. 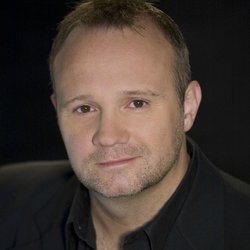 After those fruitless efforts, he found Follow Up Boss by Googling two features he was looking for in a platform: lead routing capability and the ability to integrate with multiple lead sources. He began using Follow Up Boss a little over a year ago and hasn’t looked back. Neither has his business, which saw an 86 percent boost in sales volume from 2013 to 2014. 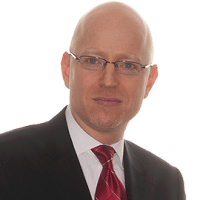 As a Keller Williams affiliate, the firm has access to the franchisor’s technology platform, eEdge, which includes a CRM powered by Market Leader.

EEdge didn’t fulfill the complete CRM needs of KWNYC in part because New York City doesn’t have a traditional multiple listing service. Barron’s firm also has its own website, which doesn’t tie in directly to the Keller Williams system, Barron said.

Before Contactually, many KWNYC agents used Excel spreadsheets and paper to manage their contacts, Barron said. Now over 70 percent of them use the CRM, he said.

Agents who tested the software for the firm last spring were hooked by the user-friendly design and an open platform that integrates seamlessly with social media channels like Facebook, Twitter and LinkedIn, Barron said.

Their feedback compelled the brokerage to purchase the CRM, which is also compatible with email systems like Microsoft Outlook and Gmail, for its agents.

Ed Hunt, an agent with KWNYC, uses Contactually to organize the 10,000 contacts in his database.

Hunt has been using Contactually for only a short time, but says he expects to grow his business with the help of the platform. Hunt said he’s particularly excited by the ability to customize action plans for specific types of leads with Contactually’s “bucketing” feature, share contacts and follow-up information with his team, and access all of his contacts in one place.

Hogan pays $299 per month for Follow Up Boss and credits it with helping him take his business to the next level.

Like a growing number of CRMs, Follow Up Boss integrates with many of the platforms agents use on a daily basis, including lead gen sources like the big portals and personal websites. It can sync up with systems like Google Calendar, Gmail, and other calendar and mail platforms.

Integrating with email systems allows many CRMs to pull in contacts seamlessly from agents’ databases, and keep records of all communications with each contact within the platform.

Hogan says he pulls in the 150 to 200 monthly leads he receives from sites where he advertises including Zillow, Trulia and Craigslist into Follow Up Boss using the platform’s email forwarding system. Leads from a mobile website he owns also flow into the CRM.

Follow Up Boss can pull in leads from more than 200 sources, said co-founder Dan Corkill. The platform lets users automatically route leads to their teams using different filters like ZIP code, price, and type of transaction associated with each lead.

An animated GIF showing how agents can set up lead routing rules by ZIP code in Follow Up Boss.

As soon as a prospect contacts his team, Follow Up Boss responds to them with an email crafted ahead of time by Hogan or one of his agents. Emails are sent from the email account of the agent who received the routed lead, giving prospective clients the impression that they’re getting customized service, Hogan said.

Hogan says the automatic email responses are the biggest factor in the jump his team has seen in its lead conversion rate since bringing on Follow Up Boss.

Follow Up Boss also alerts Hogan’s team via text and email when a new lead has come in. They know within seconds whether they should text or call, Hogan said.

“We call it the trifecta: email, text and phone call,” Hogan said.

Hogan currently advertises on Zillow in two ZIP codes where he doesn’t do business. Using Follow Up Boss’ lead routing feature, he distributes all of those leads to two referral partner agents. If it leads to enough business, he’d consider expanding to those ZIP codes, he said.

In addition to a new Internet data exchange (IDX) listing search website he’s building, Hogan plans integrate another system called Better Voice into the CRM, too, which will allow him to automatically route phone calls to specific agents based on rules he sets up.

Follow Up Boss also integrates with the comparative market analysis tool Market Snapshot and email marketing platform MailChimp, among others.

Customized action plans and task lists for specific lead types are another key new feature in these next-gen CRMs.

Hogan’s team can automate and track the follow-up process with leads, for example. He has follow-up action plans tailored to specific lead types and can keep track of which leads are where in the process. Hogan can also ensure each contact is handled by his team according to his protocol.

Contactually also allows clients to set up customized action plans with the ability to send mass email to up to 250 contacts.

Both Contactually and Follow Up Boss also integrate with firms specializing in email marketing like MailChimp if they want to do more heavy-duty marketing.

Given that CRMs like Follow Up Boss pull in leads from a variety of sources, they can also give agents visibility into how their different marketing channels are performing.

“One of the primary reasons I wanted Follow Up Boss was to constantly know my conversion rates by channel,” Hogan said. He monitors his per-channel conversion rates weekly to assess where he should spend more, and which ones he should pull back on.

Hogan decided to increase his Zillow spend after evaluating the channel’s results. Recently he tested Trulia after taking a couple years off. The conversion rates on Trulia are lower than for Zillow, but so is the cost per lead, he said. Based on this insight, he’s increased his spending on Trulia.

As with many other CRMs, Follow Up Boss also has a lead ranking system it calls a “Hot Sheet.”

Using information such as how engaged contacts have been with emails sent through the CRM, the platform displays the contacts that it predicts will be the most receptive to contact, Corkill said.

Users can also customize the Hot Sheet to create dynamic lists highlighting specific actions that agents want to track — like prospects who have been on the agent’s website in the last seven days, but who haven’t been contacted, for example.

Hogan doesn’t use this automated lead ranking system now. But his team will start to incorporate it when a new full-time staff person he’s hired to do nothing but manage Follow Up Boss gets up to speed.

Currently, Hogan and his agents manually rank leads within the CRM, moving them along in the system when they feel they’re moving closer to becoming a client.

The CRM manager’s job will be to monitor the leads that come into Follow Up Boss each day, filter them based on how hot they are, and route them on to the team accordingly. As Hogan grows the number of leads to the team, his new hire will help manage contacts more efficiently — precluding the need to bring on additional buyer’s agents and upping profitability all around, Hogan said. That’s the idea anyhow.

Other CRMs like Contactually and Market Leader help users keep track of potential income locked into different stages of a lead conversion, another feature that is becoming a staple of the CRM 2.0 movement. 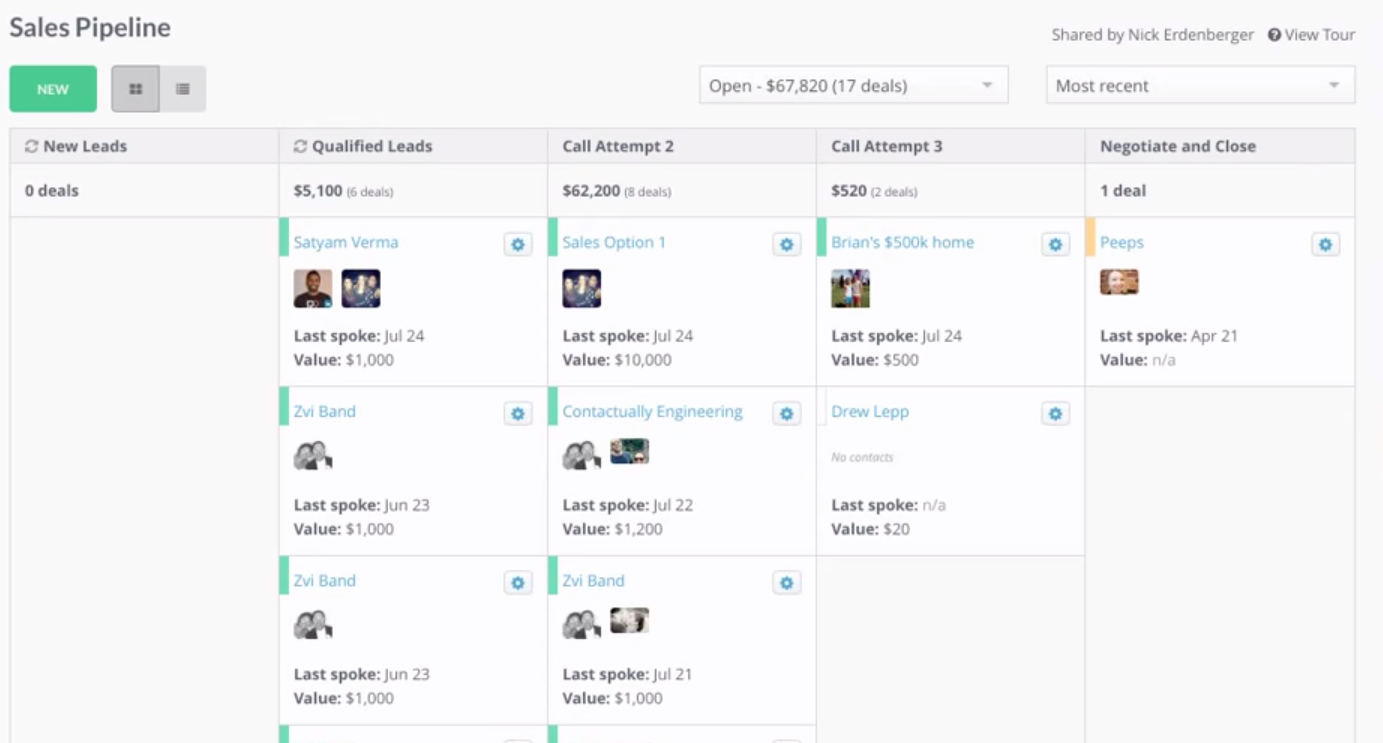 Screen shot of a sample pipeline within Contactually.

Team leader visibility is another Follow Up Boss feature becoming a staple of modern CRMs. Hogan can see how his agents are interacting with contacts in the platform.

Hogan monitors the lead follow-up performance of agents on his team and how each lead source performs, giving him insight into how to coach his agents and where to spend his marketing dollars.

Hogan can see the breakdown of leads agents on his team are working from a dashboard in Follow Up Boss.

He also uses the conversion tracking to monitor how his team is performing and to spotlight areas where specific agents may need more training, Hogan said.

Other CRM platforms like Contactually, Market Leader and ZipRealty offer broker-focused versions of their software that give brokers and team leaders insight into how agents are handling leads, overall lead response time and lead conversion rates.