Until recently, real estate agents and marketers have been the ones churning out those 3-D representations that are transforming how prospective buyers experience listings online. But that’s set to change.

Now some listing portals — including Zillow-owned StreetEasy and the Swiss listing portal newhome.ch — are beginning to roll out 3-D representations themselves, thanks to new software that automates the process of building the visualizations.

The trend might not only propel 3-D into the mainstream, but open the door to new revenue opportunities for listing portals.

Search sites may be able to wrap the representations into advertising products sold to real estate agents and developers. They may also be able to earn referral fees from companies that sell furniture, appliances and other staples of interior design when homebuyers use models to try their hand at interior design.

All of this will depend on the availability of 2-D floor plans, which are needed to automate the process of generating visualizations favored by listing portals, and whether listing portals can easily get permission to monetize them.

There are two types of 3-D representations that are gaining traction in real estate today.

The first type requires visiting a home to capture data.

Real estate agents and marketers have been producing such visualizations over the last year using hardware and software provided by companies such as Matterport and InsideMaps.

Click the image above to use a 3-D model powered by Matterport.

The second kind of 3-D representation can be generated based on 2-D floor plans alone; it doesn’t require the use of any devices.

These visualizations tend to be less realistic than the first type, since they aren’t using data collected from an actual space. But they are more scalable than representations that require transporting hardware to the location to be modeled.

Recently, 3-D providers have developed software that automates the creation of these floor plan-based representations, allowing them to make the visualizations available at low cost.

Newhome.ch is one of the trailblazers. The property search site is the biggest “freemium” listing portal in Switzerland and third largest overall, displaying 43,000 listings of both new and existing properties, according to Reto Schule, artistic director at newhome.ch.

Since December, the firm has been working to embed interactive 3-D models into all listings with 2-D floor plans. Software developed by 3-D provider Archilogic renders the 2-D floor plans into the visualizations on behalf of newhome.ch.

Newhome.ch CEO Jean-Pierre Valenghi said the listing portal doesn’t have data on how many of its listings have 2-D floor plans.

But listings that have the models provide a highly immersive experience that makes them stand out from other properties on the site.

Unlike some other 3-D representations based on 2-D floor plans, newhome.ch’s 3-D models let users wander around inside a virtual home, and stage them by swapping in furniture, appliances and other interior design features.

Newhome.ch is so confident in the models’ ability to engage visitors that it’s making them more visible than listing photos or renderings, placing them front and center on the listings while hiding property images behind a tab.

One reason for taking that approach is that the representations let consumers “feel and explore the real estate way more intensely than with pictures,” Schule said.

An analysis conducted by Archilogic and newhome.ch found that the models double the amount of time a user spends on a listing, slash its bounce rate by 85 percent, and drive up repeat visits by 70 percent.

Three out of 4 people who land on newhome.ch listing pages with the 3-D models interact with them, the study found. 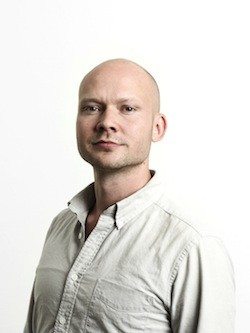 Another reason for making models more prominent than listing photos is that doing so could help newhome.ch generate more revenue, said Kaspar Helfrich, a co-founder of Archilogic, the Swiss firm that powers newhome.ch’s models.

The listing portal is seeking to monetize the visualizations in two ways: by charging for upgrades to the models and by earning referral fees from businesses like furniture and appliance makers.

Upgraded models could include details about a home that might not manifest in a basic model, such as columns in a hallway, that might require some extra work from Archilogic.

The second way that newhome.ch plans to generate revenue from 3-D representations is with a built-in virtual staging tool that lets users add digital versions of real furniture, appliances and other interior design elements.

If users want to learn more about items, they can click over to websites where they’re available for purchase. Newhome.ch is currently testing out such functionality with a number of brands, with plans to eventually split revenue earned from “furniture referrals,” with Archilogic.

Click and drag the interactive image above to play around with a Floored-powered 3-D floor plan displayed on StreetEasy.

Listing portals the world over are mulling the possibility of incorporating 3-D representations into their home-shopping experiences in similar ways.

In September, Zillow CEO Spencer Rascoff told USA Today that he expects virtual tour technology to transform the real estate industry “given a long enough time horizon … because you will be able to triage many, many, many more homes from your desktop or your tablet on the couch.”

But they do provide a 360-degree perspective of the layout of a home, and let viewers shift the floor plan angle using their device’s mouse or touch screen.

IProperty Group, the owner of a network of Southeast Asian property portals, is another firm that’s wading into 3-D. It recently adopted a marketing platform powered by DIAKRIT that enables listing portals to charge housing developers for 3-D enhancements to new-home listings. 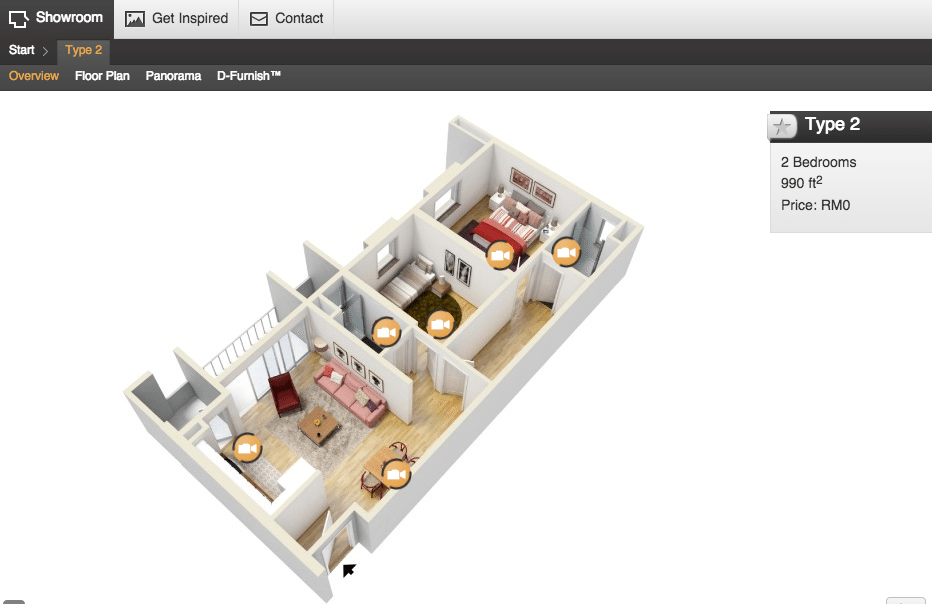 ‘D-Showroom’ of listing on iProperty.com

More deals ahead for Archilogic?

Helfrich, the co-founder of Archilogic, said one major U.S. listing portal has sent multiple business inquiries to the firm.

When asked if Trulia had reached out to Archilogic, spokesman Matt Flegal said the company has not “had any specific meetings to report,” but that it’s “an interesting area we are continuing to evaluate.”

A spokeswoman for realtor.com operator Move Inc. did not respond when asked about its plans for 3-D, or if it’s talked to Archilogic.

Helfrich also told Inman that Archilogic is in talks with what he said is the largest Swiss listing portal, homegate.ch, and the two largest German portals. He said he couldn’t name those companies because neither one has “put ink to paper” yet.

U.S. 3-D providers are also racing to polish off virtual staging tools similar to the one newhome.ch has built into its models. Matterport, which powers 3-D models for Redfin, and Floored and Canadian 3-D provider Planitar are among them.

InsideMaps — which is churning out agent-branded 3-D models for the San Francisco Bay Area brokerage Sereno Group based on photographs, not 2-D floor plans — already lets users digitally switch around a home’s furniture and color scheme inside its models.

“We had early talks with real estate portals (outside the U.S.) but we’re primarily in discussions with large developers that have floor plans or blueprints,” said InsideMaps CEO George Bolanos. “Once we show our volume capabilities, we think the portals will follow.”

Bolanos said the firm is forging agreements with major U.S. household good makers that would entitle InsideMaps to a cut of any purchases that its staging tool might generate for those companies.

Though newhome.ch sees opportunities to use 3-D models to generate referral fees, it’s unclear whether U.S. listing portals could scale that revenue model.

Listing brokers keep a close eye on the content that appears around their clients’ listings — particularly advertising — and rules governing the display of listings on portals are typically spelled out in detailed content licensing agreements.

The licensing agreements in place today may not address 3-D models that are essentially interactive advertisements. But “the first time it happens, it will cause future agreements to address it,” said Bob Bemis, a former Zillow executive who now heads a real estate consulting service, Procuring Cause Advisors.

In the meantime, brokers who object could always pull their listings. But historically, Bemis said, brokers have gotten more worked up about ads for competitors like other brokerages or mortgage companies than “adjunct advertising” by retailers who do not compete with them, such as Home Depot or Lowe’s.

“As with any innovation, you’re going to hear early, loud, strident cries from the agents who like to cry,” Bemis predicted. “But in the long run the major brokers will look at the bigger picture and ask, ‘Is this hurting my business?’ If the answer is no — which I think it is in this case because it’s probably going to help get the house sold — they won’t care and the cry will die down quickly while the rest of the industry tries to catch up to what the innovator is doing.”

The portals would need permission from copyright holders of floor plans on a case-by-case basis, Bemis said. In most cases, the copyright holders would be a home’s builder or owner, not the MLS or listing broker.

“I think the portals could make an offering to render the floor plan into 3-D (for a price, perhaps) to help sell the house,” he added. “And yes, they could share revenue back in exchange for the right to use the floor plan.”

Newhome.ch CEO Valenghi said that Swiss brokers or developers haven’t objected to how newhome.ch has monetized its 3-D models so far, but that he’d “follow this point to make sure that we find a solution in our agreements.”

He added that, so far, newhome.ch has not created a business model that shares revenue with brokers.

Another obstacle to the spread of 3-D representations on listing portals is that many listings don’t have a 2-D floor plan that makes it possible to mass produce the 3-D models.

While new-home listings typically have 2-D floor plans, most listings of existing homes do not, Bemis said.

Even in New York City, where floor plans are particularly useful to prospective buyers, only about half of listings have floor plans, according to StreetEasy.

Helfrich, the co-founder of Archilogic (newhome.ch’s 3-D provider), said he thinks that technology that makes it easy to produce floor plans, along with 3-D’s tendency to help listings grab eyeballs, will put pressure on sellers to add floor plans to their listings.

“Our goal is to get to a point where not only every listing with a floor plan will be modeled, but where customers start digging for floor plans (or creating them) to make sure they can have a model,” Helfrich said.

He said 3-D models offer a “very compelling value” and “listings without models will at some point in the near future simply not be ‘good enough.'”