The latest app aimed at protecting real estate agents in the field, “Agent.Watch,” turns your smartphone into a security camera.

When a real estate agent activates the app from an iPhone or Android device, their smartphone begins capturing videos and photos. That media is uploaded in real time to the cloud where it can be viewed by specified contacts.

If an agent presses the app’s panic button, it sends a notification with the agent’s location, along with the video and photos captured during the agent’s showing, to specified contacts. The panic button can also be configured to dial an emergency number.

Agents wary of a prospective buyer can also set the app to automatically check in with them every few minutes. If an agent doesn’t respond to a check-in request by shaking a smartphone, the app can alert specified contacts and dial an emergency number.

Though the app builds on the concept of a panic button, it’s designed to help agents who may have already put themselves in harm’s way. 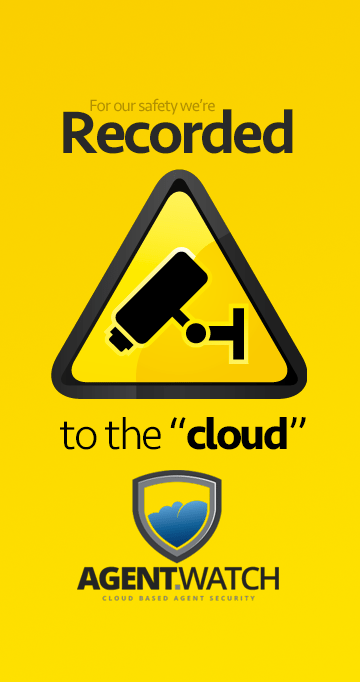 Some say agents should take more care to avoid risky situations in the first place, and have called for stricter procedures for vetting potential clients before showings.

The problem is that “we accept as normative the idea that any agent should even entertain the idea of meeting a client at a property without first meeting at the brokerage office or facilitating some sort of initial screening,” wrote Dylan de Bruin, who created the “Realtor Safety Pledge” with Joe Schafbuch, broker-owners of 90-agent firm Century 21 Signature Real Estate in central Iowa.

Kunversion is bringing the issue of agent safety to the attention of consumers by releasing door hangers, buttons and hats that “tell the public that you take security seriously.”

“Over half the battle of not getting into a bad situation is making the potential offender know that they can’t get away with it if they tried,” Tracy said. “That’s why so many people just buy the security lawn sign and not the security system.”