For years, economists and consumers alike lamented strict mortgage lending standards that were blamed for hampering the housing recovery, cementing the widespread perception that it’s awfully difficult to qualify for a home loan.

But that story has run its course, according to a new index released by Zillow.

Buyers have a much easier time getting mortgages today than they did a year ago, and housing markets “are rapidly approaching precrisis credit conditions,” Zillow said in releasing a new Mortgage Access Index.

The index takes into account seven variables, including the number of quotes lenders offer on inquiries they receive through Zillow, and the bottom 10th percentile of credit scores accepted. 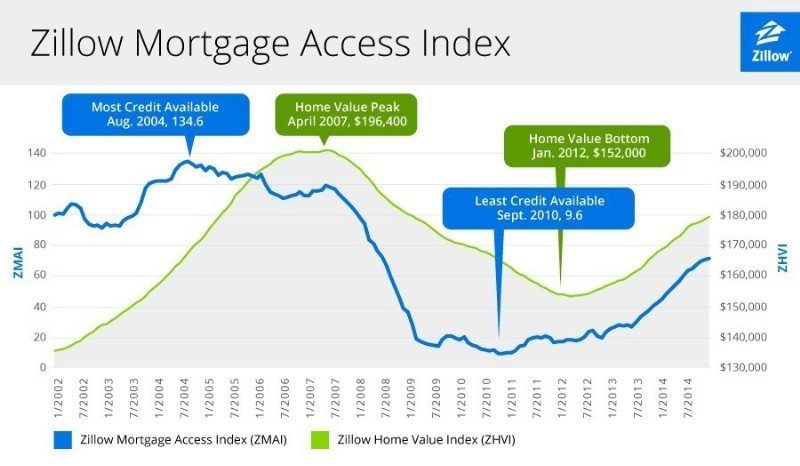 “The reality of what borrowers are experiencing in the mortgage market does not match the popular narrative,” said Stan Humphries, chief economist at Zillow. “Lenders are, in fact, opening their doors a bit wider, especially for borrowers with credit scores below 700.”

A year ago, many borrowers with low credit scores and little cash to put toward a down payment may have only qualified for loans from the Federal Housing Administration.

Today, many in that group can now nab conventional loans with private mortgage insurance, providing them with access to mortgages with better terms and rates.

Easing credit standards should help first-time buyers who have been waiting on the sidelines finally break into the market, “which will have many benefits,” Humphries said.

Mortgage credit was easiest to obtain in August 2004, but grew marginally tighter over the next few years, according to the index.

Then came the crash.

In May 2007, mortgage availability nosedived into a “multiyear plunge,” helping to whack down home values by more than 22 percent and leading to the tightest credit standards in recent history, according to Zillow.

But credit conditions have improved considerably, and are roughly two-thirds of the way back to where they were in 2002, Zillow said. (Many economists think the housing market was relatively healthy in 2002 — not too hot and not too cold.)

Humphries said that lenders are still a long way from letting credit get too loose, “but we’ll need to remain vigilant not to repeat the mistakes of the recent past.”