No matter what multiple listing services (MLSs) have decided to do about listing syndication agreements expiring today, they should let their brokers know what’s going on, according to prominent attorney Brian Larson.

The sites’ parent company, Zillow Group, is required to remove all ListHub-sourced listing information from Zillow and Trulia by midnight tonight, though ListHub’s listing information can remain on Zillow if Zillow has the consent of the listing supplier (the listing broker or MLS) in the form of a direct-feed agreement. Because ListHub will no longer be feeding to Zillow, however, that listing information will be updated by the direct feed.

Larson’s law firm, Larson Skinner PLLC, has worked with MLSs that have taken varying approaches to the ListHub cutoff, Larson said in a recent webinar. Some have decided that listing syndication is not a core function of the MLS and are therefore letting brokers and Zillow Group figure things out on their own, he said.

That is a “perfectly viable option,” though “an MLS using that approach has a burden of communication to its MLS participants to let them know that the change is coming,” and perhaps let them know what options are available to them, Larson said.

For example, San Diego-based Sandicor has let its brokers know that it has not yet come to an agreement with Zillow Group and informed them of options for posting their listings to Zillow, including via Zillow Group’s listing syndicator Postlets, manually, or with an XML file.

Other options include using their existing website’s syndication features, using a virtual tour company or using a single-property website product, according to T3Experts.

Brokers don’t always read everything MLSs send them, so MLSs should have a plan in place in case they start receiving calls fueled by agent or seller complaints, Larson said.

Other MLSs have decided to set up direct feeds for each broker that asks for one — just for their own listings — and giving them credentials they can then share with any portal of their choosing. But such a set-up can have high administrative costs — FBS President Michael Wurzer has referred to this as “death by thousands of feeds.”

“This has a lot of the same benefits of letting brokers work it out on their own. But it provides a clean, accurate pipeline of data,” Larson said.

MLSs could charge brokers monthly, quarterly, or just one time for the costs of providing that feed, he said. But a downside for the MLS of this approach is that it can’t negotiate the terms under which that data is displayed and used, he added.

A third option for MLSs is to agree to an interim “stopgap” agreement. Zillow Group has designed one that keeps listings flowing to its sites for six months, while a longer-term agreement is worked out, Larson said.

But there are a couple of terms in that agreement that might concern brokers, he said: a perpetual license to some listing data that is not included in the current ListHub agreement; and the interim agreement is designed to be opt-out for the most part.

MLSs should make sure brokers understand these terms, Larson said.

“This is essentially bowing to the pro-syndication forces [in the short-term],” Larson said. “However, if you stick with the wait-and-see approach, you’re going the other way. So you can’t split the baby on this one.”

A fourth option for MLSs is to hash out a long-term agreement. The nice thing about such an agreement is that the terms will reflect what an MLS wants and the strategy its leaders have come up with, Larson said.

Whatever an MLS chooses to do in the short-term, it should decide “What is our long-term goal?” Larson said.

“In terms of reducing [brokers’] manual effort, having the MLS provide a single aggregated feed to Zillow makes that easy for every broker. The whole point of MLSs being involved in syndication is to provide economy of scale,” Larson said.

In a RealtorMag post, Larson and Mitch Skinner, also of Larson Skinner PLLC, pointed out that MLSs face risks and costs in direct syndication that they never faced or planned to face when syndicating through ListHub.

“[T]echnology costs, staffing costs (some of which MLSs may incur anyway), training for subscribers, lawyer fees, etc.” they wrote.

“The legal risks involve exposure to copyright liability and demands that MLSs indemnify the portals. Thus, deciding whether to provide the listings of a whole MLS to Zillow Group is more difficult than deciding to send your [brokerage] firm’s listings.”

There are a lot of resources available for MLSs that still hope to sign a direct-feed agreement with Zillow Group, Larson said, including a model content licensing agreement from intellectual property protection group REDPLAN and an agreement checklist prepared by consulting firm Pranix.

Larson cautioned that neither resource may represent anything a portal is necessarily going to agree to and might not represent what an MLS would care to ask for, but could nonetheless be helpful.

Regardless of what an MLS chooses to do, it should make sure brokers know the choice of syndication is still theirs and the MLS will not share their listings unless they consent, Larson said. 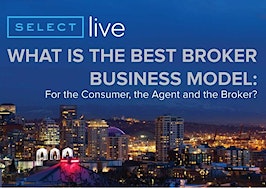 What is the best real estate broker business model -- for the consumer, the agent and the broker?
Back to top
Only 3 days left to register for Inman Connect Las Vegas before prices go up! Don't miss the premier event for real estate pros.Register Now ×
Limited Time Offer: Get 1 year of Inman Select for $199SUBSCRIBE×
Inmanpot
Log in
If you created your account with Google or Facebook
Don't have an account?
Create an Account
Forgot your password?
No Problem