Well, thank heavens that’s over. Not! It’s never over. Which is a good place to begin. Start by sorting Wall Street propaganda and bad theories in general from clear thinking about what’s actually happening and ahead.

Not! It’s never over. Which is a good place to begin.

Start by sorting Wall Street propaganda and bad theories in general from clear thinking about what’s actually happening and ahead.

Bad idea No. 1 is just silly, not damaging: The Fed’s September pass creates uncertainty. There is always a market crew perched in highchairs, hammering sippy cups and rubber spoons and squalling, “Now! I wanna know NOW! When! How much!”

Pay no attention to these overage toddlers.

Pay no attention to these overage toddlers. Uncertainty is the deal, in markets and life. It’s not the Fed’s job to bring certitude. There isn’t any. Your mommy and daddy are the center of the universe when you are two, but even as teenagers, most of us get the glimmer that we’re on our own.

Bad idea No. 2 is corrosive — now a semipolitical issue found commonly right-side, among anti-government types, but also from pure-market libertarians: We’re better off without the Fed. Or with a mechanical Fed.

Third is worse: Since all this QE (quantitative easing) and ZIRP (zero interest rate policy) has not brought a strong recovery, the Fed’s experiments have failed and never should have been tried in the first place.

Reality: A strong recovery would have been nice, but the Fed’s objective was to prevent depression. I can’t prove that it did, but it’s evident that we didn’t have one (yet), and none of these arch critics can prove what would have happened if the Fed had been inert. I can testify to the fall 2008 mass of soiled undies, and the great relief at the QE announcement in that Thanksgiving week.

A strong recovery would have been nice, but the Fed’s objective was to prevent depression.

Worst of all are the authoritative people in pinstripes who testify the economy would be better off with higher rates. This is financial creationism. The sort of people who think Fred Flintstone had a pet dinosaur.

Yes, ZIRP has hurt savers and pension funds and others reliant on passive income, but the benefit of ZIRP to the rest of the economy far outweighs those sectors. Go further: Find one case in any nation at any time in which a bad economy was rescued by higher interest rates.

To the heart of the matter: The Fed is peripheral now. By the way, so is the stock market. Oh, if it crashed, the Fed would intervene in some ways, as in 1987, but it’s not the center of the universe, either. Markets do matter to the Fed, but centrality changes from time to time. In 2008, it was the collapse of mortgage credit. Today you can bet that Fed staffers not used to the job are watching international credit and liquidity as never before.

You can bet because the Fed said so on Thursday: “Recent global economic and financial developments may restrain economic activity somewhat and are likely to put further downward pressure on inflation in the near term.”

The Fed has not given such weight to overseas conditions in nearly 20 years, but during the 1997-98 Asian-Russian meltdown, then-Fed Chair Alan Greenspan gave us this: “It is just not credible that the United States can remain an oasis of prosperity unaffected by a world that is experiencing greatly increased stress.”

We dodged that bullet in part because the Fed eased. At the time, a bubbling stock market needed a dose of tightening. Welcome to life at the Fed: Pick your poison, every day.

Welcome to life at the Fed: Pick your poison, every day.

The stock market may be overbought; if so, it’s by excessive faith in emerging economies. Cars are overbought. Student loans. Nothing else. Home mortgages outstanding grew in the second quarter for the first time in a decade, by 0.004 percent. Total bank credit is growing at the slowest pace in two years.

The Fed has been engaged in that time in some closet tightening, and the outside world has tightened a great deal for the Fed.

Stick with Clinton’s Law: “It’s the economy …” Unfortunately, no longer just ours. We must watch the whole world while its second-largest economy misrepresents its condition and pursues guaranteed-to-fail top-down control. Thus, we’re all dependent on inferential sources about China, from Fed Chair Janet Yellen all the way to our own highchairs. 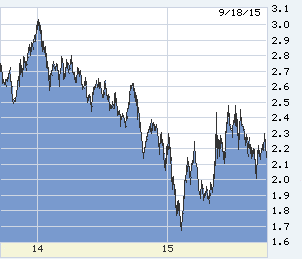 Above, the 10-year T-note, two years back … is stuck. Never-never-land until something happens, most likely a better grasp of the slowdown in China. Good China, up; bad China, down. 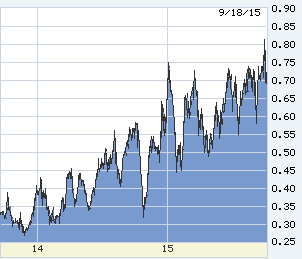 The Fed-sensitive two-year T-note, also back two years. The lesson here: The instant the Fed lifts off, twos will begin to price the next hike and the future slope. Twos got a little panicky this week, took out some insurance that the Fed might actually move, but holding deep skepticism that the Fed will move more than twice in the next 18 months. 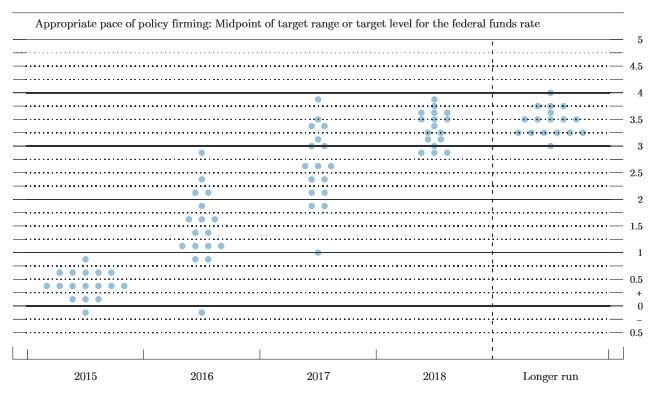 The infamous “damned little dots.” These reflect each Fed governor and regional president’s guess at the location of the federal funds rate at the end of each year ahead. I’m a Fed fan, but this is very bad work. In the last two years, especially, the dots have created the impression of a far more aggressive Fed than reality.

If you’re the Fed, among other things, do not cry, “Wolf!” The Fed fund’s futures market is useless, but the forward swap market is an excellent measure of global credit market expectation, and the swap curve is located very close to half the slope of the damned dots.

Worse than “Wolf!” — these dots indicate the Fed is out of touch with actual economic growth and inflation risk, stuck in back-look models. 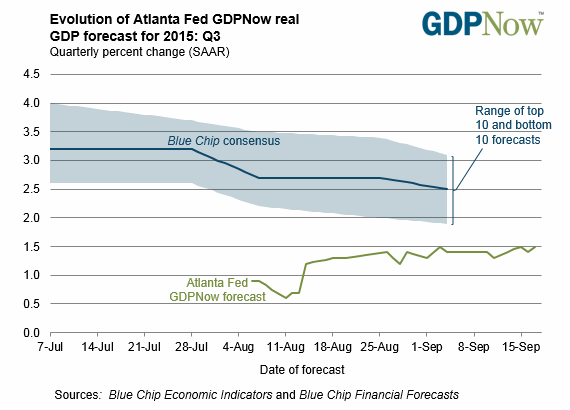 The Atlanta Fed GDP tracker has been remarkably accurate in real time. Here at the end of the third quarter, once again underperforming Fed forecast, and no acceleration going into the fourth quarter. 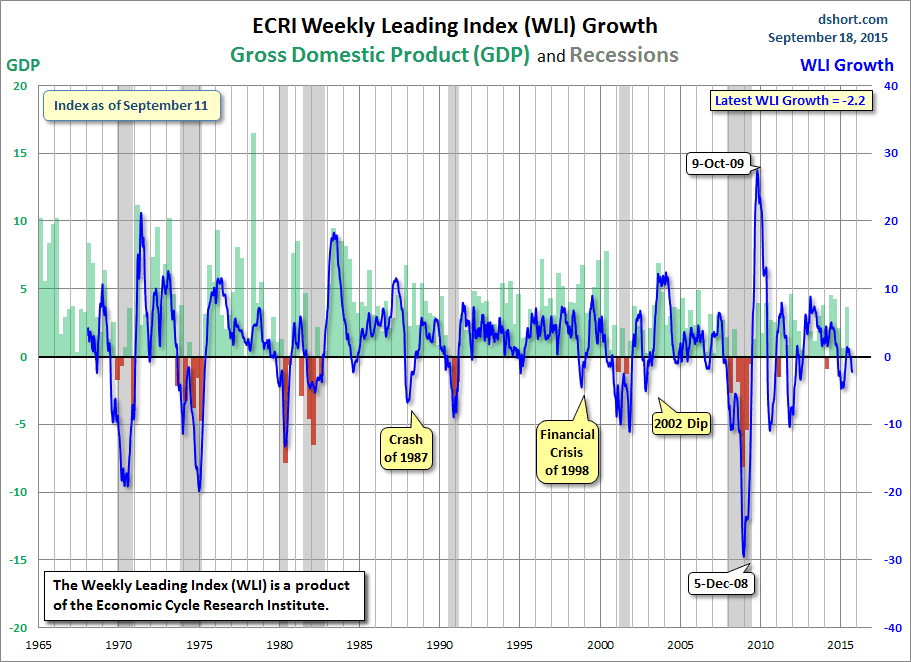 The ECRI (Economic Cycle Research Institute) has had only one false recession call in 50 years, and it correctly called all the ones that happened. The false call was in 2011, possibly correct but intercepted by QE3.

Note the two dips to minus 10 after “recovery” began. We’re not dipping like that now, but we’re not going anywhere, either. 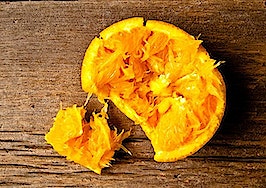 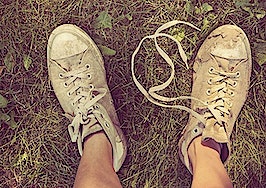 Fed leaves interest rates alone -- for now
Back to top
Only 3 days left to register for Inman Connect Las Vegas before prices go up! Don't miss the premier event for real estate pros.Register Now ×
Limited Time Offer: Get 1 year of Inman Select for $199SUBSCRIBE×
Inmanpot
Log in
If you created your account with Google or Facebook
Don't have an account?
Create an Account
Forgot your password?
No Problem