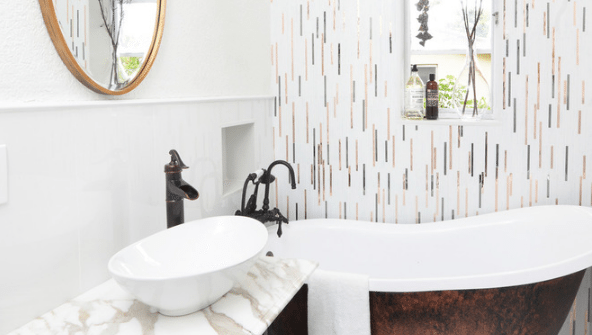 By Becky Harris; reposted with permission from Houzz

“This is the smallest bathroom I’ve ever designed,” says interior designer Nicole White. Working with just over 32 square feet and a room width that could not accommodate a standard-size bathtub, she had to get creative.

In the end, White managed to squeeze in all the elements and make the room appear roomier than its modest dimensions.

She also gave the space the playful eclectic style her client adores. Special elements include a Singer sewing machine table base-turned-vanity, outdoor faucet light fixtures, a faux copper tub, and glints of copper and silver glass in a custom accent wall. There’s even a little Judy Garland and Vivien Leigh thrown in for good measure — and neither one of them is even the superstar of the room (more on that later).

BEFORE: This room is a mere 4’9-by-6’10. With no room to borrow from on either side of the bathroom, White saved every inch she could and made the space sing.

Though the room was tiny, owner Heidi Carr had a lot of big ideas for it. White helped her find a way to fit in everything while maintaining a balanced and clean look that feels roomy.

In addition to the size challenge, the age of the 1920s building also presented issues like rotted subflooring and plumbing that needed to be replaced — both discovered during the demolition phase.

“We always warn clients of this before we get started, especially in older homes, and advise them to set aside additional contingency funds,” White says.

Browse a Directory of Designers

Oh, and for those of you eyeing that original cast iron tub, don’t fret, it didn’t wind up in a landfill. Carr now uses it as a planter outside.

AFTER: If this isn’t a staggeringly dramatic before-and-after, I don’t know what is.

“A room like this needs one superstar and a bunch of supporting actors,” White says. In this case, the faux copper claw-foot tub is the star, with a custom glass-and-porcelain tile wall and a Singer sewing machine stand beneath the sink playing important supporting roles.

“This was a tight squeeze, to say the least,” White says. The search for a tub that would fit was a challenge since the standard size is 60 inches long, and they had only 57 inches to work with. “But Heidi is a tub girl. She had to have one,” White says.

Because she had a second bathroom with a shower, Carr wanted only a handheld shower attachment in here.

After a thorough search, the pair was unable to find a copper tub in the smaller-than-standard size, so the designer got creative. She found a company that could mimic a copper finish so well, you’d swear it was developing a patina before your eyes.

“It looks so good in person, you cannot even tell,” White says. “They also let you choose the claw feet you want.”

A wall-mounted tub filler with handheld shower attachment saves space, as does a recessed shampoo niche behind it. The antique-bronze finish on the faucet complements the copper without competing with it. White extended the 1-by-2 white porcelain tile across the floor and up the walls. It reaches higher than backsplash height around the room to protect the walls from splashes. It also makes the room feel bigger and brighter; the tile is reflective and bounces the light around.

The accent wall is composed of white porcelain tile and a dazzling mix of copper and silver glass tiles. This was a custom job designed by White. “We wanted the copper to look like water coming down the wall,” she says.

A little background: Years ago, White was a newspaper journalist, and Carr was her editor. Here, the tables had turned.

“Heidi saw this idea for a sewing machine table base vanity on Houzz, and I could not talk her out of it,” White says. “I’m usually really good at talking people out of things, but the base is very Heidi — she is super eclectic, in a fun way. It’s not that I didn’t like the look; I just didn’t want her to regret giving up the opportunity for vanity storage in such a small space.”

As it turned out, Carr wouldn’t budge on the Singer stand, and White helped her find a storage solution by mounting shelving to the back of the bathroom door instead.

“I did win the battle for the white vessel sink, though,” White says with a laugh, recalling the fun she had working with her friend again. “She wanted to go with copper, but I convinced her that it would be too much and would take away from the fabulous tub — only one superstar allowed.” Thus, the tub remains the copper diva without any competition from the sink.

White was also able to score a fantastic Calacatta marble remnant that picks up on the warm tones of the copper and bronze finishes in the room.

“Heidi also likes girly things, so I gave the counter a beveled edge,” the designer says. The bronze faucet has a water pump look that also suits Carr’s playful tastes. White had it placed to the side of the sink to save precious space on the countertop.

“The second I found these light fixtures online, I said, ‘Those are so Heidi — done!’” White says. “Of course, they are her favorite thing in the whole darn bathroom!”

This piece was another one White knew she didn’t need to get approval on. While strolling through HomeGoods one day, she found a mini sewing machine jewelry box and couldn’t believe her luck. Carr is gaga over it, of course.

Carr had bought the Toto toilet within the past three years, so White simply reused it. This left more money in the budget for the accent tile. She added two additional nicshes for storage that Carr immediately filled with her favorite things.

Signed Judy Garland and “Wizard of Oz” ephemera occupy the bottom shelf, while favorite paperbacks and a geode occupy the top.

When she was young, she bought a guidebook of the stars’ homes and wrote to them, amassing an autograph collection that included Gene Kelly, Fred Astaire, Ginger Rogers, Frank Sinatra, Mickey Rooney, Peggy Lee and Rita Hayworth.

“I also collected photos and autographs of people who had passed on to the great cinema in the sky,” she says.

This “Gone With the Wind” still of Clark Gable and Vivien Leigh, along with their autographs, earned a special spot in a bathroom nook.

“Over the years, I began framing these pieces,” Carr says. “That particular piece has a background of green velvet.”

If you want to wager a guess as to why, leave it in the comments section below.