“If wishes were horses, even beggars would ride,” goes the old English nursery rhyme. Is that what’s going on today when surveys seem to indicate a powerful desire among renters to become homeowners, yet sales are starting to flatten out?

“If wishes were horses, even beggars would ride,” goes the old English nursery rhyme.

Is that what’s going on today when surveys seem to indicate a powerful desire among renters to become homeowners, yet sales are starting to flatten out?

Are hundreds of thousands of potential buyers delaying their homeownership dreams — or canceling them altogether — because they can’t find an affordable home to buy or they can’t meet today’s tight lending standards?

Or, as anyone who voted in last fall’s elections knows firsthand, are public opinion surveys seriously flawed when it comes to anticipating consumer behavior?

The February Money Pulse survey from Bankrate found that Americans may be feeling a bit confident about buying a home.

The survey found 15 percent of adults plan to buy this year. Among the most confident were older millennials and Gen Xers — 20 percent of both age groups indicate they are very or somewhat likely to take the plunge — and minorities.

Almost two in five minorities report at least some level of likelihood, more than double the percentage of white Americans.

Bankrate did the math and calculated that works out to about 10 times the 5 million to 6 million homes that were purchased last year, said Bankrate senior mortgage analyst Holden Lewis.

Noting that prices and rates are rising, Americans may be feeling a bit too confident about homeownership in 2017, he said. 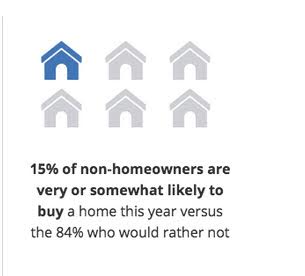 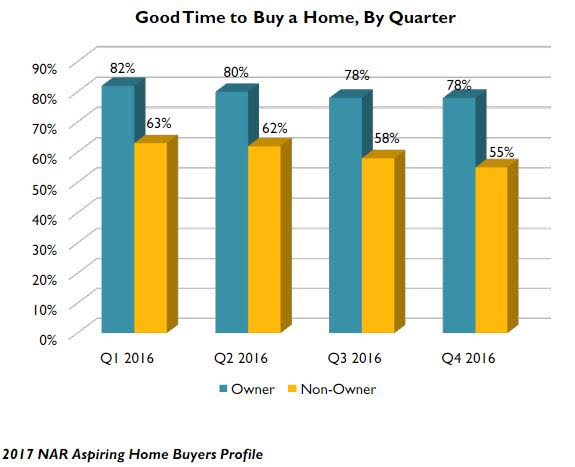 Fannie and NAR: Prices are turning off buyers

Although Bankrate’s survey was a mid-January snapshot of attitudes among all Americans — not just potential buyers — the latest results from two surveys that track buyers’ intentions closely on a regular basis provide more insight into buyers’ intentions.

They both found that long-term dreams of homeownership remain alive, but non-owners’ intentions to buy this year are falling measurably as rates and incomes fail to keep pace with rising prices.

Even though big majorities of the population still aspire to become homeowners, buyer confidence is low. The fallout could be reduced demand, at least in the near term.

An updated analysis of 2016 data from the National Association of Realtors’ (NAR’s) quarterly HOME survey found that respondents last year maintained a favorable view about homeownership, with more than 90 percent of homeowners and roughly 8 out of 10 non-homeowners each quarter indicating that owning a home is part of their American Dream.

However, despite these positive feelings, optimism about it being a good time to buy diminished among non-owners.

The share of respondents who believed it was a good time to buy declined from 63 percent in the first quarter to 55 percent in the fourth quarter. Lack of affordability and student debt were two top reasons keeping non-owners from buying.

A similar quarterly tracking survey by Fannie Mae found that among Americans as a whole, the net share of those who say it is a good time to buy a house fell by 3 percentage points. The percentage of Americans who say that home prices will go up increased by 7 percentage points in January to 42 percent.

“Any significant acceleration in housing activity will depend on whether consumers’ favorable expectations are realized in the form of income gains sufficient to offset constrained housing affordability. If consumers’ anticipation of further increases in home prices and mortgage rates materialize over the next 12 months, then we may see housing affordability tighten even more,” said Doug Duncan, senior vice president and chief economist at Fannie Mae.

Forecasts are not favorable

The top economists at Fannie and NAR may be factoring their consumer research into their forecasts for existing home sales this year.

The experts hope the dip in sales increases won’t turn into an actual sales decline before slowing demand helps prices to flatten and inventories improve.

As long as the Dream lives as intensely as it does today, it’s a good bet that in a year or two, as long as the economy improves, sales will resume a moderate, healthy pace of growth as prices and demand come into better balance in markets across the nations.