First, may as well get the embarrassing part over: the Fed raised its rate today, and mortgage rates fell. “Fell” is a bit of an overstatement, the decline no more than a fractional point — a large loan, fine credit, 80 percent, 30-year fixed still sits between 4.375 percent and 4.50 percent.

First, may as well get the embarrassing part over: the Fed raised its rate today, and mortgage rates fell.

“Fell” is a bit of an overstatement, the decline no more than a fractional point — a large loan, fine credit, 80 percent, 30-year fixed still sits between 4.375 percent and 4.50 percent.

Nevertheless, any drop is the biggest story of the day, as nearly everyone had expected a breakout in the underlying, all-powerful 10-year treasury note (T-note).

The 10-year had, for two weeks, been flirting with the crucial 2.60 percent level, and during Chair Yellen’s press conference it has slid to 2.50 percent.

Note that 2.60 percent is still crucial because there is little or no support on charts all the way to 3.00 percent. Thus when we finally do breach that level, mortgage rates may rocket toward 5.00 percent. But not today.

Continuing with first things first, the Fed manipulates the “Fed funds” rate, the overnight cost of money. Longer term rates are a market function, their levels based on minute-by-minute re-estimation of future economic growth, inflation, and Fed policy.

Today, mechanically, “prime” rose to 4.00 percent (in the modern era, prime is the Fed plus 3 percent). Short-term indices, to which adjustable-rate mortgages (ARMs) are tied, also rose.

But, mortgages: Why lower, and when will they go higher?

If the Fed continues to push up the cost of money, sooner or later long-term rates will rise also, if only because many investors finance their portfolios of bonds and mortgages with short-term borrowings. 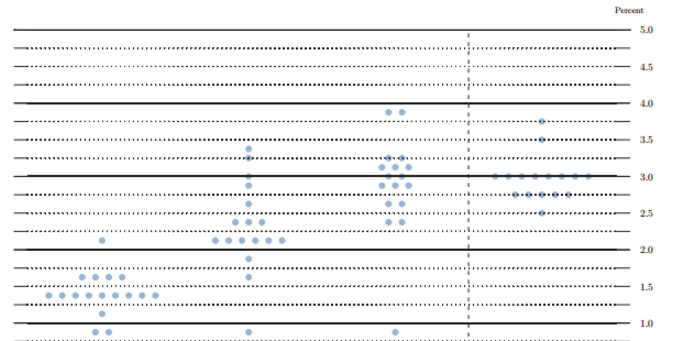 The Fed today released an updated scattergram (the “damned little dots”) showing the future Fed funds rate levels expected by the Fed’s leadership. That forecast shows Fed funds at 1.50 percent by the end of this year, plus:

At some point in that progression, long-term rates will be forced higher, with mortgages above 5.00 percent and possibly approaching 6.00 percent.

There is no rule, none at all, defining the relationship between the cost of money as set by the Fed and long-term rates. That spread changes constantly.

There is a persistent pattern: As the Fed pushes upward, its cycles long and persistent, the spread between Fed funds and the 10-year T-note narrows to nothing, and then often “inverts” — short-term rates above long-term…and that is the every-time signal of recession.

The short-long spread narrows because when long-term rates rise far enough, and the end of a tightening cycle nears, borrowers stop borrowing, and the supply of new bonds and mortgages falls.

Also, investors sense a recession nearby, and bonds and mortgages look like a good buy. With diminished supply and more buyers, long-term rates begin to stabilize or fall no matter how much more the Fed hikes. With any luck, we are years away from that end-stage.

Keep it simple, then complicate

Back to today. Fed hikes, bond rally — why?

Keep it simple, then complicate.

Three weeks ago, the Fed began telegraphing to markets that a punch was coming today.

Markets overreacted a bit, thinking the Fed might accelerate its hikes in 2017, from the three expected to four.

Nope: The Fed left its forecast for three total this year unchanged, and left the levels in future years unchanged also.

The bond market went into the Fed’s meeting today “short,” betting on more aggressive hikes, and short-sellers had to cover their negative bets by buying bonds.

For the complicated version: One year ago, long-term rates were 0.75 percent lower than they are now. The 10-year T-note stood at 1.80 percent, then promptly fell to 1.35 percent to revisit the 2013 all-time low.

Three months after that rock bottom, on the morning after the election surprise, the 10-year jumped to 2.15 percent, and within weeks to the 2.50 percent centerline where we’ve been ever since.

That jump was attributed to administration plans for economic stimulus, which now appear to have fizzled. The post-election jump was not merely premature, but also based on expectations which are not to be realized. So, the 10-year got ahead of itself, no great reason to jump again today.

And the most complicated force: The European Central Bank, the Bank of Japan, and in its own weird way the Peoples’ Bank of China are all engaged in emergency easing, the polar opposite of the Fed’s intentions. That easing unquestionably exerts downward force on U.S. long-term rates, but there is no way to know how much and for how long.

Back to simple: the Fed is highly likely to continue its 0.25 percent nibbling — and sometime this summer, the 10-year will break 2.60 percent and mortgages will begin to creep toward 5.00 percent.