Two broad sets of news this week: the Fed, interest rates and the economy; and a string of deeply reassuring political-economic events. The Fed raised the overnight cost of money by 0.25 percent and long-term rates fell slightly.

Two broad sets of news this week: the Fed, interest rates and the economy; and a string of deeply reassuring political-economic events.

The Fed raised the overnight cost of money by 0.25 percent and long-term rates fell slightly.

That’s a fact. But many of the explanations verge on fables: the economy is tanking, inflation is falling and the Fed is done with hikes.

In the two weeks before the Fed hike this week, the 10s market tried and tried to break through 2.60 percent going upward, failed, and has settled about 2.50 percent. Four-and- a-half months, and still smack in the middle of that range.

We can make heroic efforts toward an alternate story (perhaps blaming British intelligence), but plain eyesight is more reliable. The rate jump was a response to the election, and the markets’ assumption that promised stimulus would be forthcoming.

This administration will get some things done (see “reassuring” below), but its economic legislative agenda — stimulus by tax cuts, tax “reform,” health care, infrastructure and budget — is dead without substantial change in attitude and staff at the White House.

Odds favor simplicity: the post-election spike in long-term rates would by now have reversed altogether if Fed were not in serial increases in the overnight cost of money. The Fed marker is the 2-year T-note, and the spread between 2s and 10s is the most important telltale in the Fed cycle ahead.

On the day after election, 2s jumped also, on the assumption that big stimulus would force a faster and higher Fed. Twos ran from 0.80 percent to 1.10 percent, then 1.20 percent and stayed put until just the last two weeks, rising to 1.35 percent in anticipation of the next Fed hike.

The 2s-10s spread has been fairly steady since the election, but has begun to narrow. Big signal!

When the Fed is “behind the curve,” inflation-fearful tens run upward, away from the pokey Fed, 2s-10s widening. Not happening — narrowing now.

When the Fed has it about right, its hikes in the overnight rate push up 10s from underneath.

This time 10s front-ran stimulus, which has evaporated, and the Fed is gradually filling in from behind, or underneath. Do not be misled by long rates this week!

The Fed’s next hike, or the one after that, will bulldoze long rates higher. A great deal of long paper is held on leverage, and as short rates rise, long ones must also rise to remain profitable when bought with short-term borrowings — that’s the bulldozer.

The 1.20 percent spread between 2s and 10s will narrow gradually, but not as fast as the Fed hikes, therefore pushing up both 2s and 10s.

The marker for advent of recession: The 2s-10s spread disappears altogether and “inverts,” short rates above long. If we’re lucky, that won’t happen until a couple of years from now.

But there are bigger tailwinds, principally wealth effects: the huge increase in household net worth derived from stocks and homes, from $54 trillion net in 2008 to $93 trillion today.

Household debt is still suppressed, borrowing capacity substantial: first mortgage balances are $1 trillion below 2007, and home equity lines of credit are down by half.

Stuff can go wrong, sure — the most inexplicable is the flat-line of bank credit since last November. And neither Europe, Japan nor China is as stable as we. But, from there to reassurance….

U.S. media have struggled to explain U.S. political events and have been chewing on an invented bone: Trump’s election was part of a global wave of reactionary populism.

Oh, horsefeathers. The Dutch election yesterday blew that one up, as will France detonate the ambitions of Mme. Le Pen.

Secretary of State Tillerson is headed to Asia and announced that he would not take along a media crew. That’s the strongest-possible statement that this is a business trip, not grandstanding; nor will grandstanding by those whom he visits be useful.

Treasury Secretary Mnuchin in Europe: “Our focus is creating economic growth that is good for the United States and the world. It is not our desire to get into trade wars….”

The Atlanta Fed named the first black American ever to be president of a regional Fed, the super-capable Raphael Bostic, a housing expert.

Janet Yellen this week…magnificent. In her quiet way she acknowledged for the first time useful and thorough meetings with Mnuchin. And, doing her level best to avoid conflict with the Bugler in Chief when asked about conflict between the Fed and administration growth policies: “We would certainly welcome stronger economic growth in a context of price stability. And, if policies were put in place to speed growth, I’ve certainly urged Congress and the administration to consider policies that would boost productivity growth and raise the economy’s so-called speed limit….” 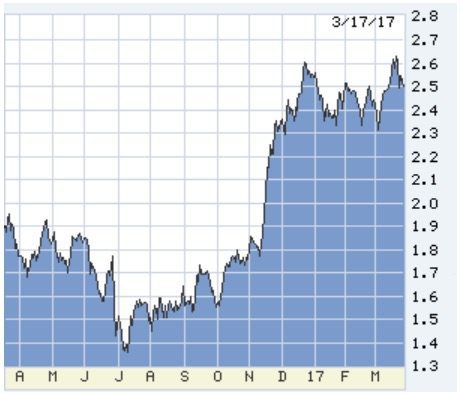 The 10-year T-note in the last year, locked in range. 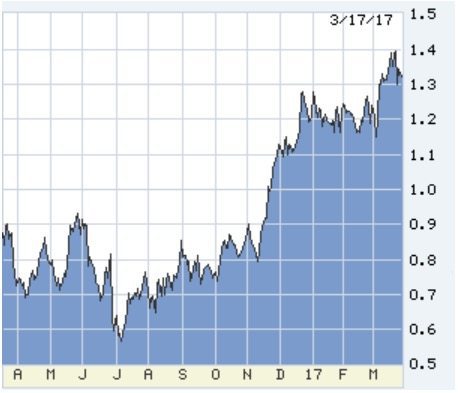 The 2-year T-note in the last year

The 2-year T-note in the last year, not so locked. Bulldozer ahead. 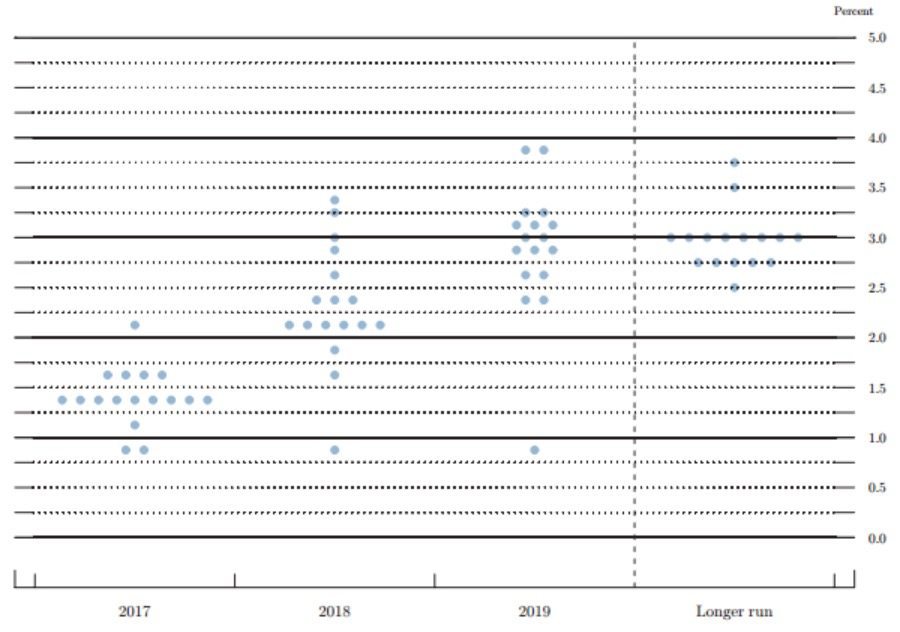 The “damned little dots,” the Fed’s estimate of the location of Fed funds at the end of each year ahead. Dismiss the top four and bottom two, corresponding to loons at regional Feds.

The all-important 10s-2s spread, always narrows toward the end of tightening cycles, and inverts at the onset. 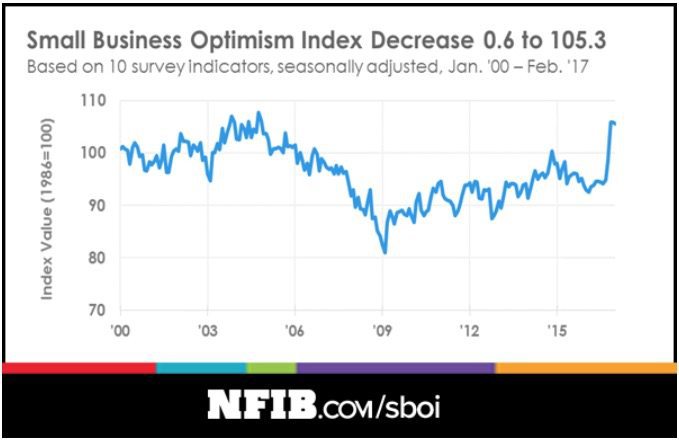 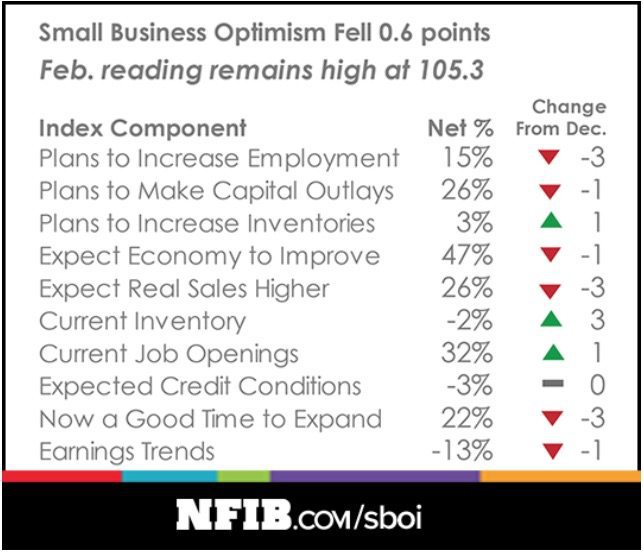 The best of all political telltales. The top chart shows the election explosion in small business confidence, which in the 40-odd years of prior surveys has always tracked the actual economy. NFIB membership is extremely conservative, thus big fans of Trump.

The lower chart shows the actual small-business performance in 10 categories, going nowhere. I do not know which will break first, performance upward or Trump-support downward, but I have my suspicions.