Interest rates moved hardly at all this week, waiting for the big load of new economic data next week — the first week of each month always brings the most important stuff.

Interest rates moved hardly at all this week, waiting for the big load of new economic data next week — the first week of each month always brings the most important stuff.

Markets are also puzzling how to play the Fed’s insistence that more hikes are coming soon, and the administration’s descent into non-function.

The Fed puzzle shows in the spread between 2-year and 10-year T-notes. If you’re a 2-year trader, and get the Fed wrong, you’ll soon be delivering pizzas. 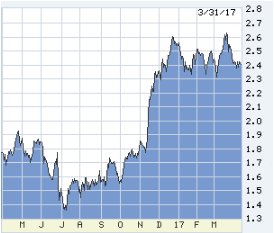 The 10-year T-note is stuck — if anything, more deeply stuck.

The Fed manipulates the overnight cost of money, which determines the cost to leverage holdings of Treasurys (and everything else). A 2-year note is both short-term and low-yielding. If you buy a bunch of 2s expecting a certain level of the Fed funds rate, and a Fed hike surprises you… “Pepperoni on that? Thick crust?” 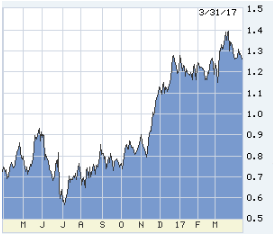 The 2-year T-note is wrestling with pricing up right now.

In early March, the 2-year began to price the next Fed hike, rising from 1.15-1.20 percent to 1.25-1.40 percent, the spread to 10s narrowing to barely 1.10 percent. That narrowing typically signals one of two things: the Fed is overdoing its tightening, or the long-term market is in denial.

Odds are rising on it being denial. Eric Rosengren is the president of the Boston Fed, and typecast as neither a hawk nor dove — just smart. He was the first Fed voice in summer 2008 to say how much trouble we were in, noting that market panic had offset all Fed easing in the prior year. 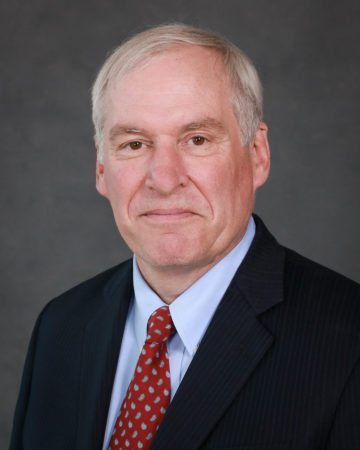 He then supported the zero-rate policy and QE (quantitative easing), until last year. This week he called for four increases in Fed funds this year, and embarking on a mechanical series of hikes at every other meeting. We’ve had one this year, to a band .75-1.00 percent. If three more come at Rosengren speed, the bond market is badly mispriced. “Mushrooms? Sausage?”

Rosengren’s key insight: He says that markets assume that the Fed’s default setting is no change, while the Fed at each meeting is looking for new justification to hike. He wants the markets to understand that the actual default setting is to hike unless new data says to stop.

But, why move so fast? Rosengren: “Inflation pressures build up in the latter stage of recovery.” (Nobody wants to hear “latter stage.”)

Also, this week William Dudley, president of the New York Fed and a proxy for Janet Yellen, gave the doves’ case. He sees the economy as stronger; his happiest thought is that core inflation will soon stabilize near 2 percent. He thinks negative rates are finished, too, but then addressed the “how high” question.

He reasserted the Yellen camp belief that the Fed’s ultimate target (the “equilibrium rate”) will be unusually low, somewhere between the same

as the rate of inflation or perhaps 1 percent above inflation, far under the historical inflation-plus-2 percent and then some.

These two good people disagree only in how fast the Fed will get at least to the inflation rate, 2 percent or so. The market is not prepared for fast or slow.

As Rosengren joked, the market hopes for only a quarter-point each Christmas, as in the last two Decembers. For long rates to stay down here, we need either some news of slowdown, or prayer that all of the ECB (European Central Bank) and BOJ (Bank of Japan) bond-buying will continue to suppress bond yields.

Political pressures influencing markets? Not yet

Meanwhile, I did some digging to refresh my memory of the Watergate years. The Trump administration is mired for the moment in political ineptitude, which may pass, and so there is no way to evaluate economic stimulus.

In any case, the great hazard is this Russia-campaign business. Historical charts do not show real-time movement in response to any of the crucial Watergate dates, including Nixon’s resignation.

The Fed paid no attention to Watergate, and markets traded on economics. The stock market drop at the time of resignation was the effect of recession, not politics.

There is plenty of Watergate/financial hooey posted on the web, alleging stock market response, but none include the Fed on a crushing path of tightening in response to the oil embargo and surging inflation, simultaneous with Watergate.

If we made it through Watergate with markets trading just on economics, we’ll make it through this.