So it’s no shock that those states were all in the “strong” or “very strong” buyer traffic sections of the National Association of Realtors’ (NAR’s) latest Realtors Confidence Index report, which surveys 50,000 Realtors every month; 2,703 Realtors responded to March’s survey, and 1,484 of those respondents had closed a sale.

And it’s likely no surprise that those Realtors said the biggest challenge they faced in March was — wait for it — a lack of homes for sale. 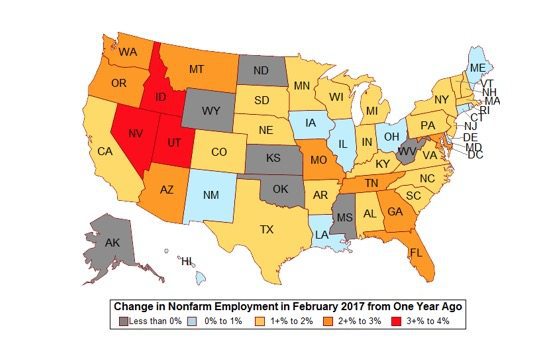 The buyer traffic index shows moderate, strong or very strong buyer demand in every state except Wyoming, where buyer demand is weak. 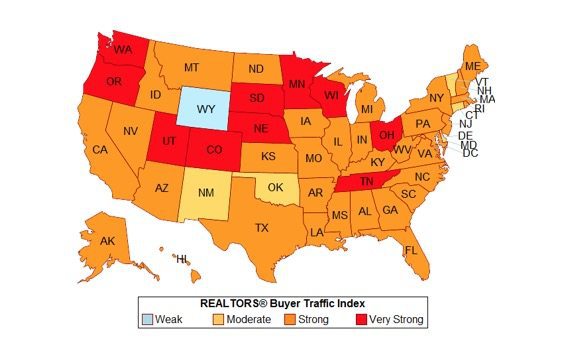 The buyer traffic index for March 2017.

Employment did contract in a few states — “the oil-producing states of Alaska, North Dakota, Wyoming, Kansas, Oklahoma, and Mississippi, as well as in West Virginia,” according to NAR’s blog post.

… But sellers aren’t stepping up

“Respondents reported that demand is strong, but supply is lacking, especially homes that are affordable to buyers,” said NAR in its report. 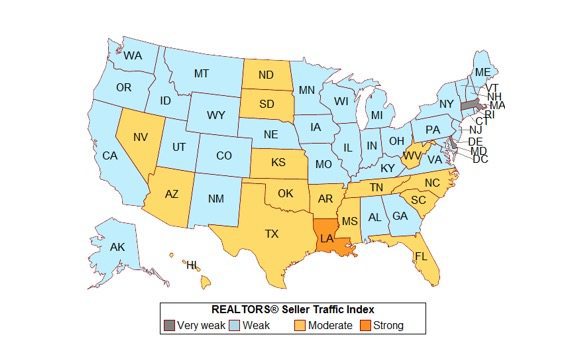 The seller traffic index for March 2017.

“In some of these states, the job cutbacks have led to ‘moderate’ seller traffic conditions,” NAR stated in its blog post. “Texas, which has a more diversified economy, has been more resilient than other oil-producing states, with employment growing slightly above the national average.”

“Amid tight supply, half of properties that sold in March 2017 were on the market for 34 days or less compared to 47 days in March 2016,” NAR noted in its report.

So there still aren’t enough affordable homes for all the buyers who want to buy, in short.

Haven’t we heard this song before?

Trump is proposing a CFPB overhaul -- who would that affect?